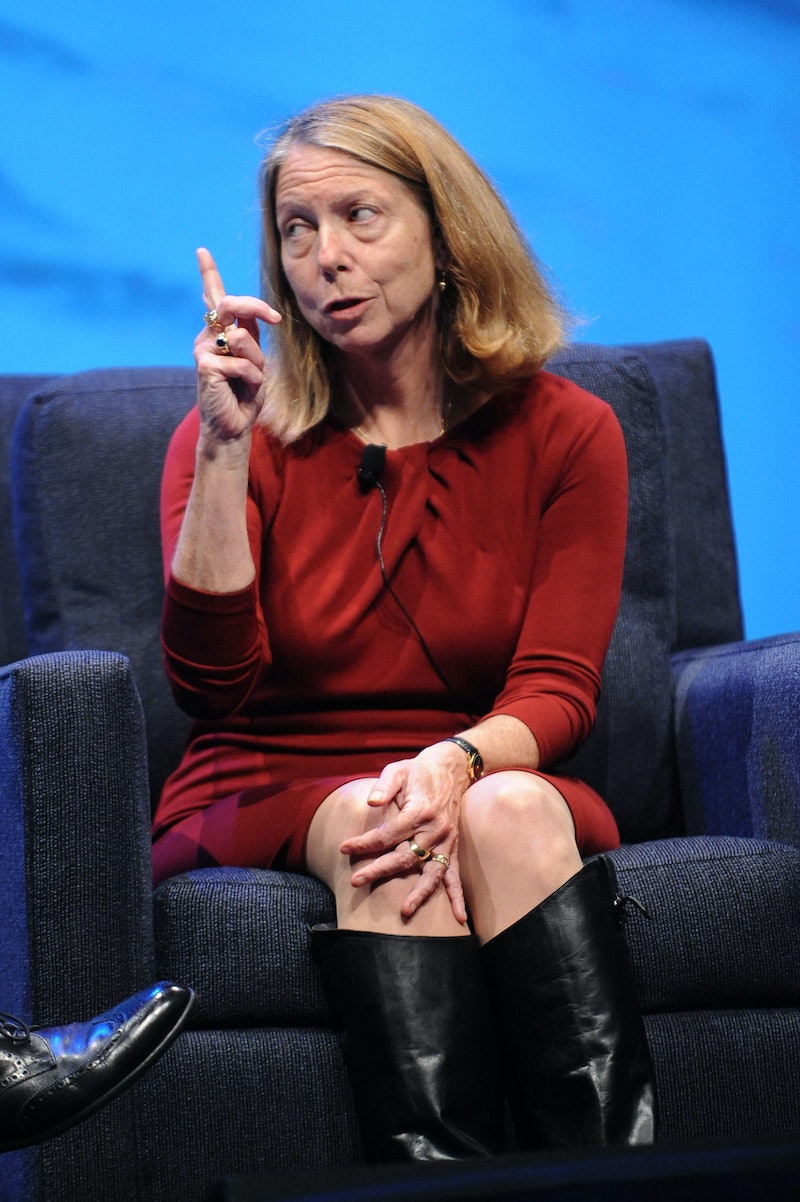 After a three-year run as executive editor of the New York Times, Jill Abramson was dismissed Wednesday amid reports that her departure was related to a salary dispute and complaints about her management style. In the New Yorker, Ken Auletta writes that Abramsom learned that her pay and pension, in both her current role and previous position as managing editor, were considerably lower than those of predecessor Bill Keller. She confronted the powers that be, an act that hewed to management's apparent narrative of Abramson being a "pushy" and aggressive presence at The Grey Lady.

In their own reporting of the event (can we say conflict of interest?) (On that note, I sometimes write freelance travel pieces for the Times), the New York Times cited "serious tension" with its publisher and chairman of the board Arthur Sulzberger Jr., and referred to Abramson's "polarizing and mercurial" style, making no mention of a salary dispute. Auletta's 2011 profile of Abramson saw former managing editor John M. Geddes say, “Jill is a little more competitive. She will say, ‘XYZ had this story this morning. What are we doing?’” So pretty much precisely what the executive editor of an enormous and highly competitive journalistic organization should be saying, yes? Is this the kind of pushiness we are talking about?

While some are focusing on Abramson's legacy (gotta love those glass-half-full types!) of bringing a female-heavy masthead and an increased focused on digital to the Times, the bulk of the conversation following her ousting has revolved around gender — namely, what the reported salary dispute says about the gender wage gap, not to mention the fact that an assertive male executive wouldn't be called "pushy," "stubborn" or "brusque" — he would likely be called direct, authoritative, and no-bullshit.

Bryce Covert at the New Republic asked "how far women can reach without suffering consequences" professionally.

Abramson would certainly not be the first woman to experience a wage gap even when she made it to the top, and then to suffer repercussions for having the audacity to ask for more money...The highest-paid female executives at S&P 500 companies still make 18 percent less than their male peers.

And those women who speak out against this disparity often face negative consequences, she writes.

One study found that both men and women are less likely to want to work with women who ask for raises, but men don’t face those negative consequences. They are just given the raises. Another found that a body of research points to “both social and financial backlash” when they are assertive at work.

So when a woman tries to act like a man to get ahead — or, you might say, like a leader — she suffers: liked less by both male and female colleagues, penalized for being "too aggressive." When a man leads we see his assertiveness as "bold," his demands "direct." But when you're Abramson — or any female boss before her — you're just a bitch.

Feminist writer Ann Friedman expanded on this theme in her blog, citing all the ways things may be different if Jill Abramson were a man.

She is difficult to work with, unreasonable, impossible, stubborn. He has a strong vision and insists on seeing it carried out.

She is not a naturally charismatic person, not approachable, tough as nails. He is direct.

She is uncaring, unable to march forward or provide reassurance, and doesn’t make people feel good. He is not your mommy.

She is condescending. He is the boss.

And while female CEOs are more likely to be fired in general since they are more often brought on when companies are failing and they are sometimes unable to right an already sinking ship, it seems that Abramson's tenure coincided with an era of success for the Times. Vox reports:

You often see companies change management amidst business crises. But one thing that is clear is that amidst a generalized crisis for the American newspaper industry the Times is doing quite well as a business ... None of that proves Abramson was doing a great job as executive editor, of course. But it does make this change in leadership different from the vast majority of newspaper turnovers that we've seen in the past 10 years — the outgoing editor has been working at the core of a growing and successful business, not a declining one.

So the "when women get to top management positions, they are sometimes fired, just as men are," narrative that Sulzberger is apparently trying to advance doesn't quiiiite seem to fly here. As Sheelah Kolhatkar writes at Bloomberg Businessweek:

It would be nice if it were that simple. The gender disparity in the workforce — in compensation, in leadership positions, in the double-standards around management style and physical appearance — makes for a fundamentally unequal playing field. Until that changes, the firing of a woman at the top of her profession will never come without questions about whether gender played a part.

Until women are paid as much as their male colleagues — and are no longer expected to idly sit by when their male colleagues are paid more — and until they are able to demonstrate the same assertive leadership qualities of their male peers without being deemed "bossy," then this conversation will continue. But until that day? Abramson will be just fine. As Rachel Sklar writes for Medium,

Jill Abramson shed the power to manage the New York Times yesterday — and that is some huge power. But she didn’t shed HER power. She walked out of that place with a tremendous record and the capital she had built in the job she loved. What was the source of her power? Her work, the legacy she has built doing the work, and how much she cared about the work.

More like this
These 3 Zodiac Signs Could Write A Bestselling Novel
By Brittany Beringer
25 Inspiring Quotes From Black Women To Celebrate Black History Month
By Kyli Rodriguez-Cayro and JR Thorpe
6 Organizations Fighting Police Brutality That You Can Support Right Now
By Syeda Khaula Saad and JR Thorpe
Watch Jacinda Arden’s Devastatingly Honest Resignation Speech
By Sam Ramsden
Get Even More From Bustle — Sign Up For The Newsletter
From hair trends to relationship advice, our daily newsletter has everything you need to sound like a person who’s on TikTok, even if you aren’t.