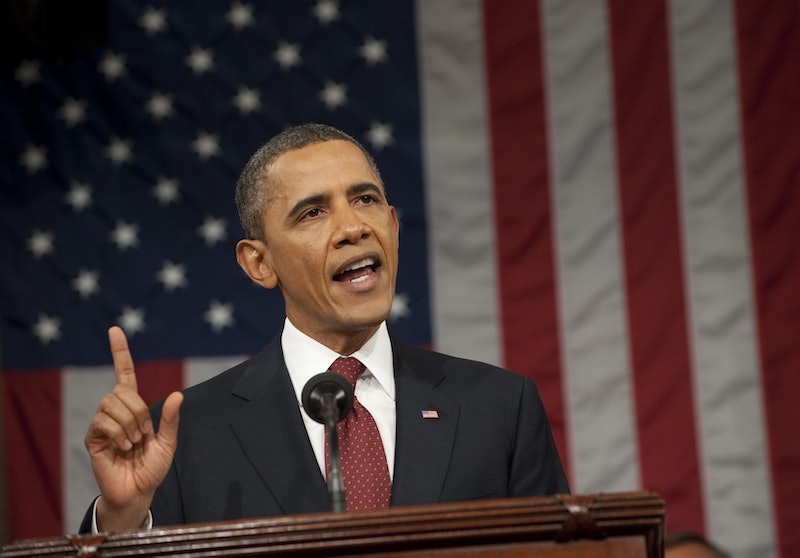 In this year's 2014 State of the Union address, President Obama joked about a lot of things, from Mad Men to Healthcare.gov. But he wasn’t joking when he addressed the gender gap in income, stating, “You know, today, women make up about half our workforce, but they still make 77 cents for every dollar a man earns. That is wrong, and in 2014, it's an embarrassment.”

There are a lot of embarrassing things going on when it comes to the treatment of women in this country, from the push to restrict contraception and abortion, to a growing sense of distrust among low-income women who feel that the system has continually failed them. But it’s disappointing that Obama chose to use the “77 cents on the dollar” statistic to make this point, because it’s a lie. Women don’t make 77 cents to every man’s dollar — and rehashing that statistic every time gender income inequality is discussed detracts from addressing larger, more chronic problems of inequality in America.

None of this should suggest that there isn’t a serious problem with pay inequality among genders — it just shows that the problems run much deeper than numbers on a paycheck. Women earn less money over the course of their lifetime because they work fewer hours and lower paying jobs, two huge issues that suggest chronic failures in our society.

When you hear “77 cents to the dollar,” it conjures the image of men and women working in equal jobs, for the same amount of time, being paid wildly unequal wages. But that talking point is a perversion of a statistic released by the Bureau of Labor Department, which found that women’s median full-time wage earnings are 77 percent of what men make when also working full-time. The number 77 is there, but a lot of other things aren’t accounted for, like hours worked, industries worked in, education, and experience level.

In a 2007 study, economists Francine Blau and Lawrence Kahn attempted to control for these differences and found a number for women and men doing equal work for equal amounts of time. What they found was that education and experience level contributed little to gender pay gaps — women tend to be as educated as men and, increasingly, as experienced. True differences come from the sectors in which men and women work, and the amount of time they work over the course of their careers. When they accounted for these differences and compared men and women working in the same field, they found that women earn closer to 91 cents for every dollar a man earns.

None of this should suggest that there isn’t a serious problem with pay inequality among genders — it just shows that the problems run much deeper than numbers on a paycheck. Women earn less money over the course of their lifetime because they work fewer hours and lower paying jobs, two huge issues that suggest chronic failures in our society.

First, we live in a society where women, for whatever reason — be it subtle sexism or outright discrimination — find themselves in fields that pay them less than men. Although women make up nearly half of the U.S. economy, they hold less than a quarter of all STEM jobs; women hold only 27 percent of computer science jobs, a drop of 30 percent from a decade ago. Though studies show no difference in gender ability when it comes to STEM, girls report a lack of confidence in studying these subjects. We live in a society that fails girls from a young age, ushering them into jobs that pay less than their male peers.

Even when women break into high-paying fields, they work fewer hours than men over the course of their lives, a statistic largely attributed to time taken off from work to raise children. When women have children, they take maternity leave — zero weeks of which are required to be paid for by their employer. Even if a woman's employer allows her paid maternity leave, she still is likely to work fewer hours on average than her male colleagues, and family can be a big reason for this disparity: in 70 percent of dual-earning families, women still act as the primary caregiver for children. Women are more likely to miss work due to a sick child than men.

These are just some of the factors that influence the gender pay gap that can be accounted for. In the same 2007 study where Blau and Kahn placed the pay gap close to 91 cents to the dollar, they noted that over 40 percent of the gender wage gap can’t be explained, and may be due to straight up discrimination in the workforce between men and women. The statistics also don’t show is the pay gap between white women and women of color, who face compounded discrimination based on their gender and race.

Closing the gender pay gap is a hugely important step, because, as the president said, it is embarrassing that in 2014 women make less than men. But it’s not enough to mandate equal salaries for women and men working in the same jobs, which is why Americans have to give up their beloved “77 cents to the dollar” statistic for more meaningful discussions of workplace policies and unequal industries. It’s a catchy statistic, but it’s not enough, and it's become an empty applause line that hinders progress by making the problem seem easier to fix than it actually is.

More like this
Watch Jacinda Arden’s Devastatingly Honest Resignation Speech
By Sam Ramsden
TikTok Has A Genius Old School Hack For Saving Money
By Sophie McEvoy
Twitter Has *A Lot* To Say About The "Single Penalty”
By Sam Ramsden
25 Inspiring Quotes From Black Women To Celebrate Black History Month
By Kyli Rodriguez-Cayro and JR Thorpe
Get Even More From Bustle — Sign Up For The Newsletter
From hair trends to relationship advice, our daily newsletter has everything you need to sound like a person who’s on TikTok, even if you aren’t.