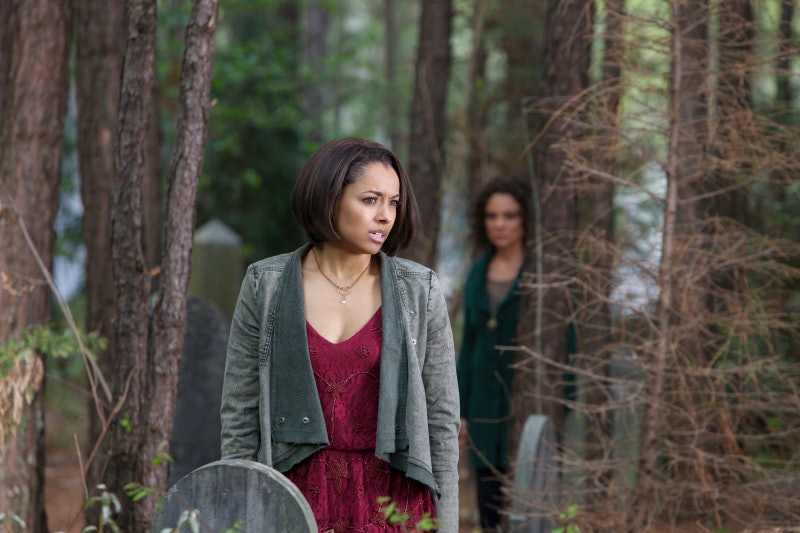 This series is in the business of killing its characters. Thursday night, there's one thing we're entirely certain of: three characters will die on The Vampire Diaries Season 5 finale. But which three characters will they be and will the deaths actually be permanent? Because TVD never lets anyone stay dead. Following the death of Big Three character Stefan Salvatore last Thursday, rumors are spreading like wildfire about who's on their way to The Other Side next.

And do you know what else is spreading like wildfire? Theories based on cast-revealed spoilers. TVD stars Kat Graham, Ian Somerhalder, and Paul Wesley have sounded off about this finale, because, apparently, it's as shocking to them after spending five seasons on the Julie Plec-helmed series as it will be for fans. But back to those theories. There's nothing more fun than trying to predict which of your favorite or non-favorite characters is going to kick the bucket in a season finale — see what you've done to us, Plec?

First, I think it's important to note that though death might be in the cards, for our main characters — think Elena, Damon, and Stefan — Somerhalder and Co. have contracts through next season on the series. Meaning that if they die and it actually turns out to be permanent, we won't be losing them from the small screen. As far as I can tell, there's a criteria for killing on TVD: you're either a disposable guest star (most character deaths have come from this pool) or you're a main character whose death is being used to shock fans into a frenzy (think Elena's human death or Damon's werewolf bite). So, with that in mind, who's going down?

The immediate reaction to Stefan's death was this theory: Damon Salvatore will sacrifice himself to save his brother. And when we look at the synopsis for the finale, it seems likely that Damon "putting on his hero hair" will get him incinerated in the fire he plans to use to burn Mystic Falls to the ground. A Damon-death would be shocking and unexpected because he's a huge part of TVD's future, but at the same time it'd be redeeming — more or less prompting fans of the show to get even more attached to this character. But now we're still left with two more deaths to bury.

As much as I'd like to believe that Plec is going to perform a mass murder of three main characters and send them over to The Other Side so it won't feel disjointed to host part of Season 6 there like Paul Wesley teased, because that'd truly be insane — go big or go home, girl. It probably won't happen. Meaning that one of the two remaining spots will go to Liv or her brother Luke. They've taken on some pretty big and involved roles and really turned the tables on the vampires during the penultimate episode. So they've got to be on someone's hit list.

The final remaining death slot is a complicated one — if Plec goes the route of killing off Damon for shock-value and to make him even more lovable than before, she's going to have to match that somehow. Basically so his death won't steal the entire show. I'm ruling out the mortals here — Sheriff Forbes and Matt Donovan — because, well, they both could've died 100 times already. And if Plec is going to tease deaths, I highly doubt it'd be for characters that we've honestly expected to die three seasons ago. Think about it, people. I'm also going to assume that we'll rule Caroline and Elena out of the running on this one as well — spoilers for Caroline's Season 6 romance are already on the table and killing Elena would just be impossibly lame and people might actually be happy about it. Definitely not the right motivation for using up a big death.

So that leaves us with three main characters left: Tyler/Julian, Bonnie, and Jeremy, one of whom is technically already dead because a Traveler shipped his soul off to a netherworld to inhabit his body (Tyler) and the other two have died at least 100 times each, so there's that. We should also take into consideration that we really expect Bonnie to die while she's trying to save The Other Side — she probably won't, unless Plec is gunning for an obvious death. After all, she's died casting spells before because she just can't take Grams' advice. And Jeremy, well, we'll just rule him out — we like him and he's been through enough, honestly. So out of the three of these characters, Tyler/Julian seem most likely to bite the dust. If everyone succeeds in exterminating the rest of the Travelers, killing Tyler/Julian and hopefully evicting Julian from his body will be the next step. Because we don't need a rogue Traveler running around.

The gist of it — I could be totally wrong, but I'm assuming I'm not — is that we're going to see Damon, Tyler/Julian, and either Liv or Luke kick the bucket on Thursday night. That covers all of the bases: shock-value and redemption, a necessary but unfortunate death, and just a random death to drive up the body count. Considering TVD's formula in the past, this should be exactly how Plec attacks the finale and all of the characters in it.