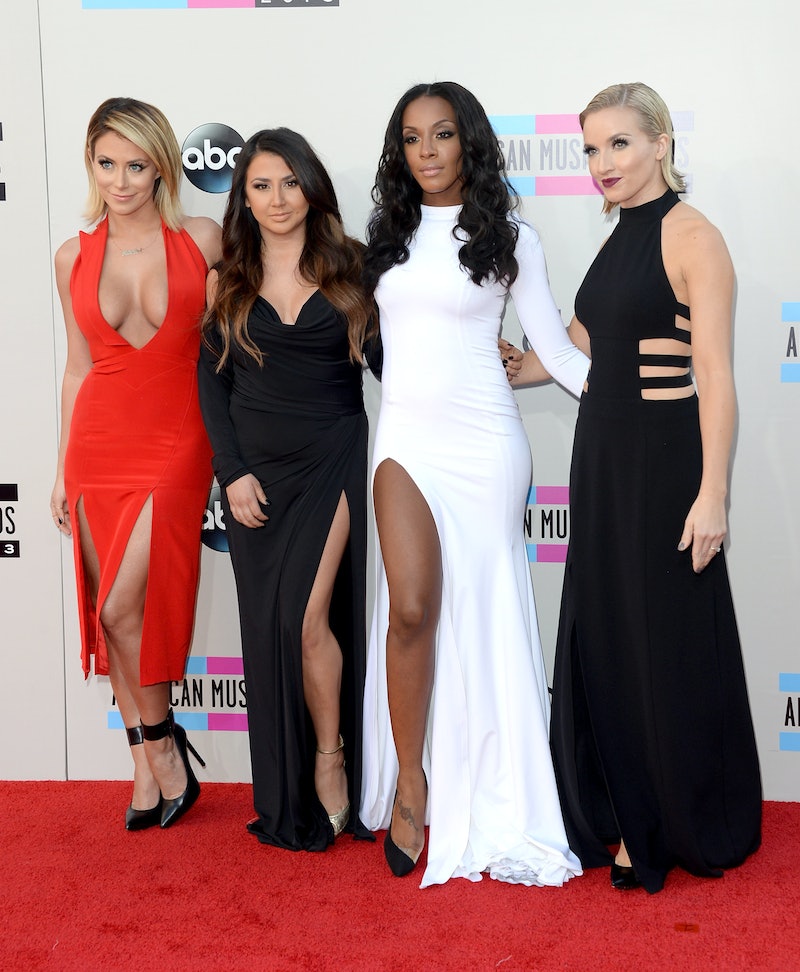 In Sadderday news, it looks like the Danity Kane haters won't be the only ones with sour looks on their faces because the band is making a comeback. Earlier this week, Aundrea Fimbres' noticeable absence from the cover of the group's new single "Lemonade," — in addition to her failing to promote the single via social media — had everyone wondering if another unfortunate round of girl drama shrank the DK foursome down to a trio, but, shockingly, that doesn't seem to be the case. Aundrea Fimbres has confirmed her departure from Danity Kane, but instead of a catfight clawing her from the clutches of the highly-anticipated Danity Kane reunion, it's... a baby!

After the group performed their single "Lemonade" without her at the first #DKNoFilter tour show in San Francisco, Fimbres took to the stage with her soon-to-be stepdaughter and announced her engagement, as well as her pregnancy. She told the crowd, "I've gotten to do some amazing things with Danity Kane, but it's time for me to start the next chapter in my life."

My first reaction upon hearing this news went something like: "Aundrea, NOOOOOOO!" followed by falling to the floor in a miserable heap.

C'mon, son! Like, they just got their crap together and showed us that yes, girl groups can rise above petty, manufactured-for-TV drama and recover from the wrath of Diddy, er, Puff Daddy, to make a startling comeback! First, no D. Woods, now you?! Sigh.

Then, I came to my senses and realized this isn't your classic girl group disbandment. As far as we know, there's no juicy gossip involving Fimbres being a diva, or ditching rehearsals to snuggle up to her fiancé. No trash-talking, no animosity. She's simply leaving to start a family and she's expecting her first kid, so who can be anything other than momentarily mad at that? Honestly, I'm shocked, but only that it happened this soon. After all, her commitment to DK has wavered since the start, as we saw on the day Diddy fired Aubrey and D. Woods. Plus there's the time she backed out of that performance on Aubrey's reality show.

So with a slightly heavy heart, we bid you farewell, Aundrea. Despite the finality of your statement, perhaps you'll pull a Beyoncé, have a baby and get back to bizness.