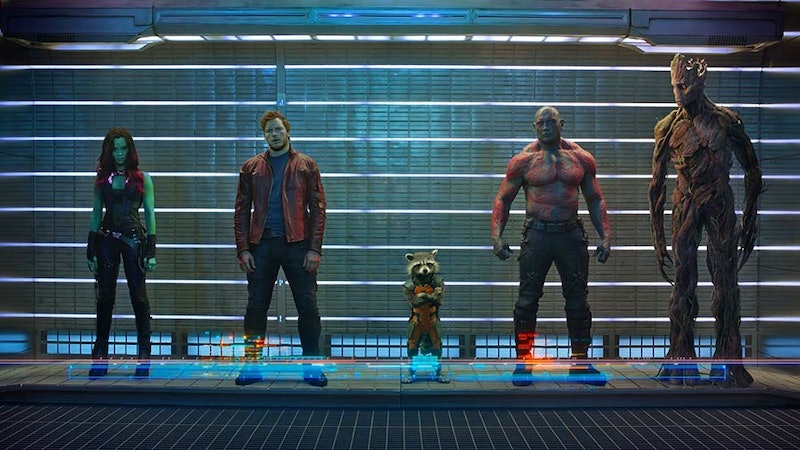 You're drooling with anticipation for Guardians of The Galaxy, right? Well, Marvel knows that. So much, in fact, that you can't even get a trailer. So, here's a teaser of the new trailer for Guardians of The Galaxy , even though the actual, full-length trailer will be released on Monday, May 19. Marvel is saying to you, "GET EXCITED FOR A TRAILER!" (Lowers head. Shakes head. Perks up because you're still intrigued nonetheless.)

The movie's certainly been hyping it up since its first teaser back in February, which featured a shirtless Chris Pratt, and the hype certainly hasn't stopped since. It hits theater later this summer, on August 1, and it's got a pretty incredible cast (and a raccoon) to back up this promotional hoopla — Chris Pratt, Zoe Saldana, Vin Diesel (relevant again!), Bradley Cooper, Doctor Who's Karen Gillan, Djimon Hounsou, John C. Reilly, Benicio del Toro, and Glenn Close. Damn! It's certainly going to be a summer blockbuster for those sweaty August days. Hopefully it's an example of a movie that lives up to its anticipatory press brigade.

Anyway — check out the teaser for this trailer. It's twenty four seconds, but hey, it means the movie is coming sooner than it was yesterday, right?