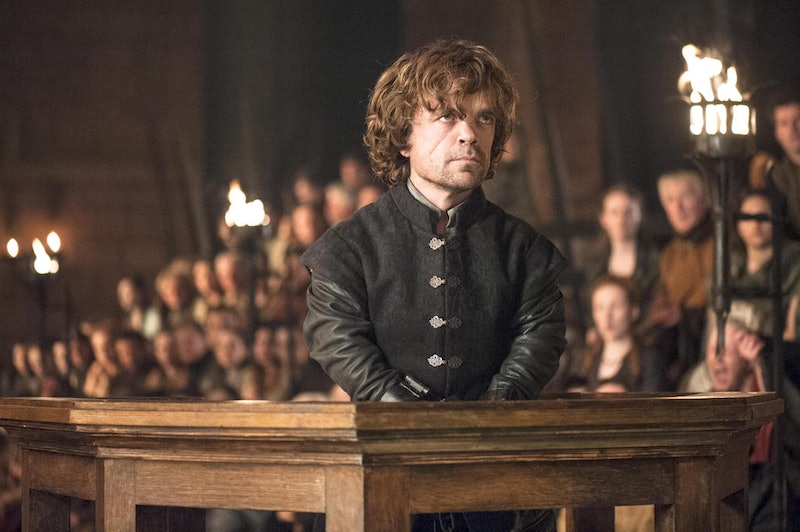 The time has come, folks. In last week's episode of Game of Thrones , Tyrion demanded that he have a trial by combat in order to decide, once and for all, whether or not he should be found guilty of murdering Joffrey. After some painful betrayal and what looked to be an inevitable defeat of his trial since his father Tywin was clearly going to vote against him, Tyrion made the smartest move possible in the most badass way possible. (Though the alternate ending dance break would have been just as cool.) Question is what happens now? And how will his decisions affect his biggest antagonist at the moment, Tywin?

Tyrion must find a suitable champion to fight for him while Tywin must do the same. If Tyrion's champion loses the fight, he will be convicted and sentenced. If you don't want to find out Tyrion's fate and how it affects his father, a man that has hated Tyrion all his life, now is the time to look away. Seriously. Just enjoy your naive innocence until the answer all of us book readers know is finally revealed on television. Probably tonight. The rest of you, enjoy.

Here's what we know from the novels: Tyrion's champion will be chosen for him in a way since Prince Oberyn offers to fight for him against Tywin's champion, Gregor Clegane, AKA The Mountain, aka the man who raped and murdered Prince Oberyn's sister. After a series of unfortunate events, Prince Oberyn loses the battle and in turn, Tyrion loses his trial. However, before he can be sent to be executed for a crime he did not commit (unfortunately), Tyrion escapes, with the help of his brother and Varys.

But Tyrion doesn't just disappear into the night. No, no, no. He deserves some just desserts. We already know what he does to his former lover Shae when he finds her in his father's bedroom. But the real revenge comes when he confronts his father. Tyrion discovers from Jaime that his wife who passed away some years prior was not a prostitute, like he was told but was in fact just a peasant girl just like the story he originally believed when he met her. Tywin concocted the prostitute story and forced Jaime to go along with the lie.

Livid and angry at his whole family, he renounces Jaime and swears retribution on not just Tywin, but Jaime and Cersei as well. He also taunts Jaime about Cersei's infidelity while the Kingslayer was making his way back to King's Landing. Finally, Tyion heads to his father's chambers where he stumbles upon Shae and later Tywin. He demands to know the truth about his wife, Tysha, and what happened to her. Tywin's exact words in the novel are that she went "wherever whores go."

After that final blow, there's nothing left for Tyrion to do. He shoots his father with a crossbow in the bowels. As Tywin dies, George R.R. Martin gives us arguably one of the best lines in the entire "Song of Ice and Fire" series.

"But the stink that filled the privy gave ample evidence that the oft-repeated jape about his father was just another lie. Lord Tywin Lannister did not, in the end, shit gold."

So let this be a lesson to all Game of Thrones characters out there: Don't mess with Tyrion. Let that be a lesson for us all.