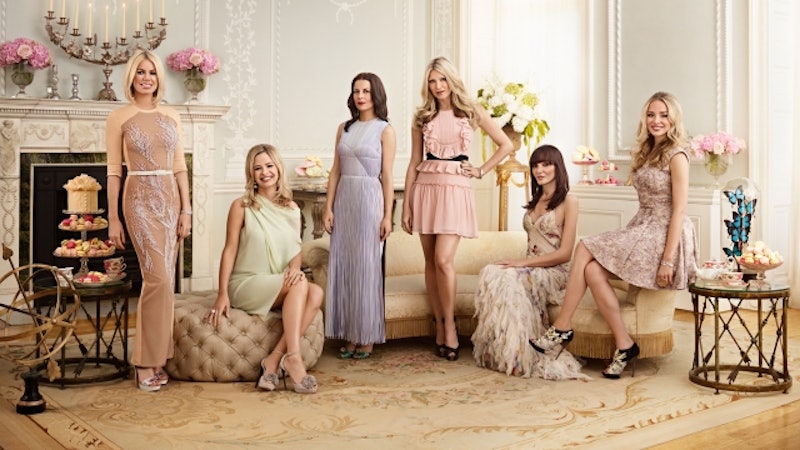 While watching the extended trailer for Bravo's new series, a question hit me: If these are Ladies of London , why are most of them American? And then I thought, “Oh my god, Nicole. You can’t just ask people why they’re American.” All Mean Girls references aside, though, by the time the trailer was over, I had my answers. Despite the fact that only two of the seven gals in the somewhat seedy social circle the show focuses on are actually British born, the expats are now just as prevalent when it comes to high society in London.

Of course, this doesn’t mean their American-ness endears them to their British counterparts. Nope, actually, quite the opposite; it appears the Brits of the group (Annabelle Neilson and Caroline Stanbury) would rather have their American castmates stay in the US instead of letting “their boobs fall all over the place” on English soil. The show may not premiere until June 2, but I’m more than geared up to welcome a new, super dramatic group of reality stars into my living room (and, let’s face it, my heart, too) with open arms.

Here are the American LoL cast members… and how they ended up in London in the first place:

Chicago native Juliet graduated from the University of Southern California with a journalism degree but ultimately found her true passion in the fashion industry, according to Bravo. After conquering Hollywood, the next logical step was to hop across the pond and take on London, too. Now, she lives in Battersea, South London, working as a celebrity stylist and she'll soon launch her own styling studio.

Caprice hails from Hacienda Heights, California, but set off for London to be a model in her early 20s. From there, Caprice has dominated the local theater scene, where she’s taken on several starring roles in West End productions. And oh yeah, she’s scored over 300 magazine covers. NBD. Now, she runs her own London-based business: By Caprice, a lingerie line that has expanded to include bedding, swimwear, and pjs. Not too shabby!

Like Caprice, this Seattleite decided to make the switch from the US to London for the good of her modeling career at 20 years old, and ended up being darn successful before she helped start her own cashmere fashion line, called Degrees of Freedom. Also like Caprice, Noelle holds a degree in communications. Now, she’s dating real estate mogul Scot Young and likes to spend her free time blogging and writing.

Marissa's originally from Newport Beach, California (hi, Seth Cohen!), but moved to London right after graduating college to start her career in fashion. She eventually hopped back across the pond to work with Syndicate Media Group, but then fate stepped in. One night, she ran into Matt Hermer, an old friend from London, and the rest is history. Marissa moved back to London and married Matt in 2010, and now they have two sons. All together now: Aww.

Like Juliet, Julie is also from Illinois. And although she’s American, Julie’s the only member of the cast who’s actually royalty. Her husband, Luke Montagu, is the Earl of Sandwich (yes, that’s a real thing), officially making Julie Viscountess Hinchingbrooke. After she and Luke were introduced, the couple married in London, where they’ve lived with their children ever since. Think she gets to hang with Kate Middleton?

More like this
What Jen Shah's Delayed Sentencing Could Mean For The 'RHOSLC' Season 3 Reunion
By Brad Witter and Jake Viswanath
What To Know About Simon Guobadia’s 3 Ex-Wives & Children
By Brad Witter
A Definitive Guide To All 52 'Real Housewives' Beauty Brands
By Audrey Noble
The 'Kenan & Kel' Reunion On 'SNL' Took A Dramatic Turn, Thanks To Keke Palmer
By Brad Witter
Get Even More From Bustle — Sign Up For The Newsletter