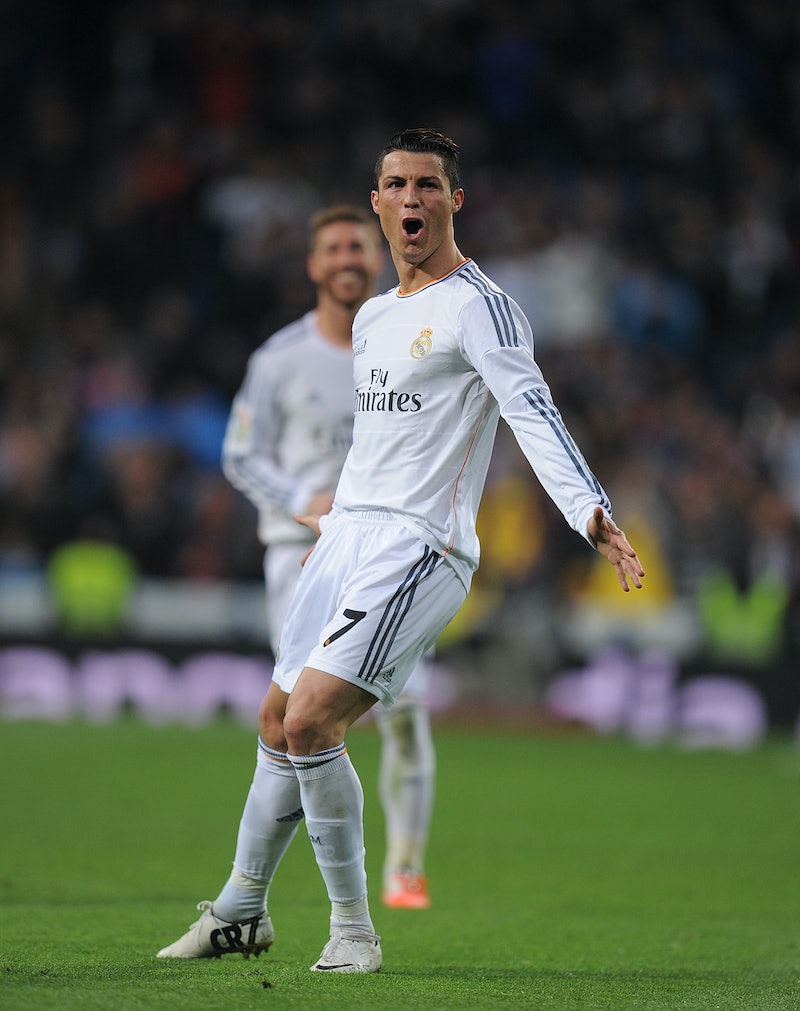 An avid soccer fan, I am not. I know from being on Twitter sometimes that the World Cup is coming up, and that it is in Brazil, where a lot of beautiful people live. And joining them will be fellow beautiful person, Cristiano Ronaldo, who I've had a heart-melting crush on before I even knew why he was famous (it's for being a forward for Spanish football club Real Madrid as well as the captain for the Portugal national team, if you were wondering).

And, in celebration of the World Cup and generally just being a gorgeous person, Ronaldo stripped all the way down for this month's Vogue Spain. Like, all the way. In the photo, shot by Mario Testino, he's completely clothing free, but hidden strategically behind his equally-stunning fiancee, model Irina Shayk. This is Shayk's third Vogue cover, and she looks awesome in a structured white dress. And, frankly, I'm psyched about the guy being the clearer sex object this time. His junk might be conveniently covered up, but there's not much else of Ronaldo's perfectly-chiseled physique left to the imagination.

Also, is this going to be Vogue's thing now? Just putting impossibly stunning couples together on its cover? After Kim Kardashian and Kanye West's cover doing so well, I guess its a strategy worth exploring. And if means more nude dudes and alongside powerful ladies, I'm very into it.

More like this
Ryan Reynolds Brought Some Famous Friends To Wrexham A.F.C's Last Game Of The Season
By El Hunt
Jake Daniels Just Became The UK’s First Active Football Player To Come Out As Gay Since 1990
By Sam Ramsden
What Is Jeanie Buss' Net Worth? The Lakers President Is Uber Rich
By Hugh McIntyre
Lily Collins Swears By This Product For Perfectly Air-Dried Hair
By Keely Weiss
Get Even More From Bustle — Sign Up For The Newsletter