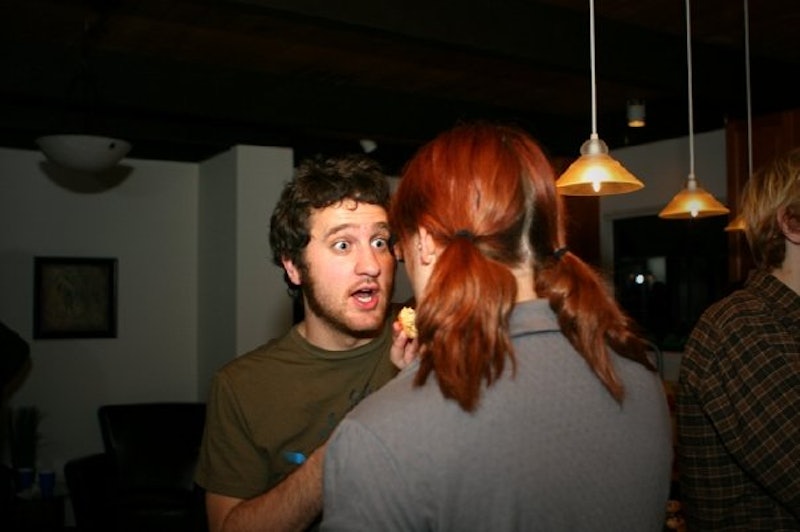 When I was 22, I enrolled in a class at UC Berkeley called "Female Sexuality". At that time, I fancied myself an "enlightened male liberal," for lack of a better term. What that meant to me at the time: I loathed most anything that could be labeled "macho," and I enjoyed talking about my feelings. I couldn’t care less for sports or competition, I related much better to women than men, and considered myself in touch with my feminine side. At the time, I figured that this — combined with my awareness of the economic privilege I was born into — made me about as open-minded and progressive as a white male could hope to be.

Throughout the next semester, I learned just how wrong I was. But it took time.

As a man, I’m more or less granted free reign to talk as much and as loudly as I want in most social situations. That wasn’t something I’d ever noticed or appreciated before, because it had never been restricted. I also hadn’t noticed that my female friends weren’t afforded that same latitude, and that they were very frequently talked over in group conversations — many times, I’m sure, by me.

On the first day of class, our instructors said that the men, for the first couple of weeks, would be expected to "step back" and be "silent partners" — that is, not say anything. It was essentially a course in progressive gender politics; other than me and one other guy, all of the 20 or so students were women.

My initial reaction was indignation: Why can’t I contribute to the discussion? Don’t the words matter more than who’s saying them? How is it fair to prevent someone from talking on the basis of their gender? I don’t remember the degree to which I vocalized these objections, but I know I was thinking them pretty vociferously (if it’s possible to think something vociferously).

The rule was reversed when some women in the class objected to it, and I proceeded to do exactly what the instructors didn’t want me to do: Talk a whole lot, dominate the conversation, and generally take up more space in class than anybody else. I figured everyone would be thrilled to hear non-conventional views on gender from the perspective of a slightly non-gender-conforming man. The notion that a bunch of women who’d signed up for a class called “Female Sexuality” might not be terribly eager to listen to a guy yapping away about his own life truly hadn’t occurred to me.

It didn’t take long for the instructors to pull me aside and tell me that if I didn’t step back a bit more, I’d be kicked out of the class. I remember being vaguely aware that I was talking a lot, but it was really, really hard for me to shut up. I’d been a pretty talkative student for most of my life, and in the past, teachers and professors had encouraged me to be vocal and participate. Plus, if any of my female peers in the class had an issue with my vocalness, they didn’t express it. (Why that’s the case is obvious to me now, but more on that later.)

When I didn't get the message, my facilitators had to take me aside once again and warn me that I needed to make room for other people to speak. I apparently got the message that time, and the instructors ultimately allowed me to remain enrolled. I’m enormously indebted to my instructors for having kept me in that class, as it ended up forming the nucleus of most of my views on sex, gender, and privilege.

But again, it took some time. Early on in the class, we took one of those "Am I privileged?" quizzes, which consisted of the instructors reading off a number of statements and the students checking off whether or not they applied to us. One statement on the list was something to the effect of, "I have never had to worry about walking home alone at night."

This made me think about the frat parties I used to go. Back then, when a girl wanted to go home before any of her friends, it was standard practice for one of her male friends to walk her back. That wasn’t just a holdover of 1950s chivalry; sexual assault was not uncommon on the streets of Berkeley, and this was one way we attempted to mitigate that risk. I happily walked friends home on a number of number of occasions. "Hey, cool," I’d think. "I get to come across as chivalrous without really doing that much."

But when I heard that statement read aloud in class, I finally thought about how inconvenient that must have been to all of the women who had wanted to leave parties before their friends. When I wanted to go home, I just left, and that was that. When a woman wanted to go home, she had to either risk going it alone, or find a guy she trusted who didn’t mind disrupting his night to walk her back. Her ability to simply sleep safely in her own bed was in part dependent on another person.

Amazingly, I had never thought of that before. I’d never thought of it because I never had to; I’ve had the luxury — the privilege, if you will — of not having to think about it. But as someone who fiercely protects my own independence at every turn, I can only imagine how irritating I would have found that. I use the phrase "I can only imagine" literally; I won’t ever know how that actually feels — if "irritating" is even the right word? — but I suspect it doesn’t feel good.

As the class went on, I started to see why my instructors had told me to be quiet during those first couple of weeks, and why they were right to have done so. As a man, I’m more or less granted free reign to talk as much and as loudly as I want in most social situations. That wasn’t something I’d ever noticed or appreciated before, because it had never been restricted. I also hadn’t noticed that my female friends weren’t afforded that same latitude, and that they were very frequently talked over in group conversations — many times, I’m sure, by me.

When I read Princeton student Tal Fortgang’s "privilege doesn’t really exist" manifesto a few weeks ago, my first thought was that Fortgang is an ignorant jackass who doesn't understand what the concept of privilege entails. But then I remembered: Before anyone can "check" their privilege, they need first understand what privilege actually is. If they don’t have at least a rudimentary understanding, asking them to check it won’t accomplish anything other than pissing them off.

If you had told me to "check my privilege" on the first day of that class, I would have scoffed, like Fortgang did, and told you to mind your own business. I wouldn’t have actually known what you meant by "privilege," but I would have probably interpreted the statement as, "You don’t know how good you’ve got it, show some humility."

But here's the thing: I did recognize a couple of (small) components of how good I have it (namely, my upper-middle class, white upbringing and loving, supportive parents). It’s just that I had no idea how big my blind spots were in that regard, and so the suggestion that I was somehow being ungrateful or ungracious would have offended me.

It’s not that I possessed different values than I do now. But I hadn’t been forced to step so far outside of my own perspective, listen to the experiences of others who lacked my own privilege, and hear specific examples of how that lack of privilege affected them. Luckily, a class in college did exactly what it was supposed to do: It provided me with that perspective, which was essential in getting me to understand what privilege actually is. In other words, it educated me.

While a guy like Fortgang might be too bullheaded to ever accept the concept of privilege — he practically wears his ignorance as a badge of pride — it is possible to get a privileged person to see and accept that they enjoy invisible advantages every day of their lives. It just takes time and patience.

At least, it did with me — and I know I still have a long way to go in fully grasping all of its intricacies. While my dreams of making Female Sexuality a required course in public schools probably won’t come to fruition anytime soon, it would be worthwhile to educate privileged people about how their privilege works before asking them to be aware of it.

When I tell a woman that I write for a feminist website, she often seems inordinately impressed, or at least intrigued. While I understand why this is, I try to remind myself every time that, if I were a woman with the exact same job, I likely wouldn’t be afforded nearly as much credit or attention.

So instead of telling her all about my job, I pause. I check my privilege, and then listen to what she has to say next.