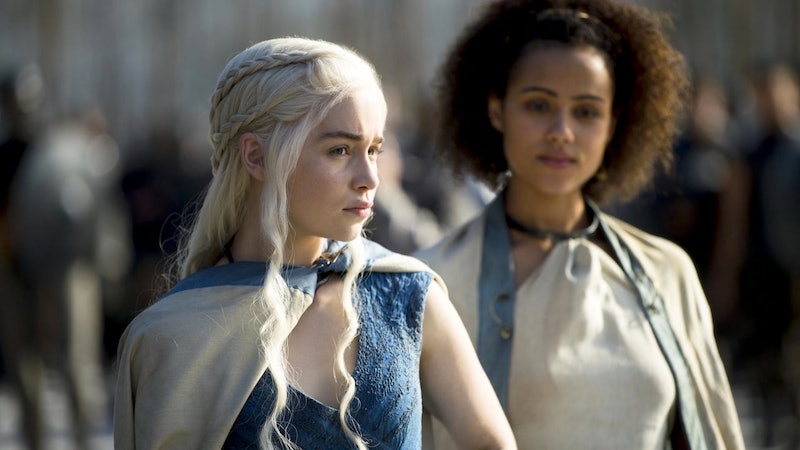 A weird thing happens when you miss live TV. You DVR the forgotten shows, sit down a few nights later to catch up, and decide that it's prudent to watch all the series you weren't home to see at once, back to back. In the process, you discover something odd: although you might not notice it normally, seeing these two totally opposite series in a row makes you realize that they're actually pretty similar. Such was the case when, after being away all weekend, I spent last night watching Saturday's Orphan Black and Sunday's Game of Thrones , and found myself feeling a strong sense of deja vu halfway through the latter. As it turns out, clones and thrones have a whole lot in common — specifically, the characters of Daenerys and Rachel Duncan, who, I've discovered, are basically the same person.

Take this weekend's episodes. Both shows featured what amounts to the exact same scene, with dialogue and purpose so similar that I actually paused Thrones and said, "wait, didn't I just see this?" In Black, Rachel, the most ruthless of Tatiana Maslany's many clones, orders her male companion to strip. "Take off your shirt," she orders, and he does without complaint. Clearly in power, she watches him, getting both amusement and satisfaction out of seeing her sex object do as she demanded, without so much as a single word from him.

One hour later, I'm watching Dany order Daario to "do what you do best: take off your clothes," while he, silent, does exactly as she demands. Like Rachel, the only reaction Dany has to her male companion's nakedness is approval and contentment with having the power to get him to do as she wants. Although Thrones (surprisingly) didn't show the actual sex scene, like Black did, it's clear that it happened — and that Dany, like Rachel, was totally, unarguably in charge.

The stripping scenes in this week's episodes may have been strikingly similar, but they're not the only things that Dany and Rachel have in common. A few more examples:

They're Going to Lead the War

Dany: The Mother of Dragons has been absent from the action in Westeros so far, but this season's events have proven that that's all about to change. She's gathering her troops, raising her dragons, and, if she has her way, is going to plop down on the Iron Throne before long. People underestimate her, but Dany's about to make clear that she's much, much more than some silly girl in Meereen.

Rachel: Unlike on Thrones, the battle about to be had on Orphan Black is less clearly defined, but what's certain is that there will be a battle, or at least a clone face-off, before season's end. Rachel, a self-aware Neolutionist, will undoubtedly take charge — that is, unless Helena doesn't get to her first.

They Have Men Who Do Exactly What They Say

Dany: Daario is just one of the many, many men (and women) Dany has to do her bidding. What Dany wants, Dany gets, and plenty of people are thrilled to make that happen.

Rachel: In Saturday's episode, Rachel reveals that although Doctor Leekie once acted as her guardian, he's now lower in the company than she is. So, in addition to sex slave Paul, there's Leekie, Daniel (R.I.P.), and probably at least a dozen others we haven't yet met under her control.

They Have Trusted Companions Who Might Be Double-Crossing Them

Dany: No, I'm not talking about Jorah, or even Daario. I mean the dragons, those once-tiny, devoted creatures that now are scaring Dany with their freedom and strength. They're still mostly hers, but scenes in the last few weeks have shown that the dragons have minds of their own, and that they might not be as willing to help Dany with her bidding as she assumes.

Rachel: Saturday's episode showed Doctor Leekie giving potentially life-saving medicine to Cosima, despite Rachel ordering him to wait. We're beginning to see that the clone, despite being above him in title, might not be where the doctor's allegiances lie.

Their Enemies: a Crazy-Haired, Vengeful Woman, a Fan-Favorite on the Run, and a Beloved Man Wrongfully Imprisoned

Dany: It might seem early to call then enemies, but without a doubt, the moment Dany's ships arrive in King's Landing, everyone with claim to the Throne will be working for her defeat. Count Cersei, Arya, and maybe even Tyrion among them.

Rachel: And this is where it gets creepy. Helena, Sarah, and the recently-imprisoned Felix are all out to bring Rachel down, albeit for very different reasons. Apparently, Black's creators have a thing for George R.R. Martin — not that we blame them, of course. If two of the best shows on TV share a few things in common, we're the ones who benefit. Those behind clones and Thrones, keep the similarities coming!