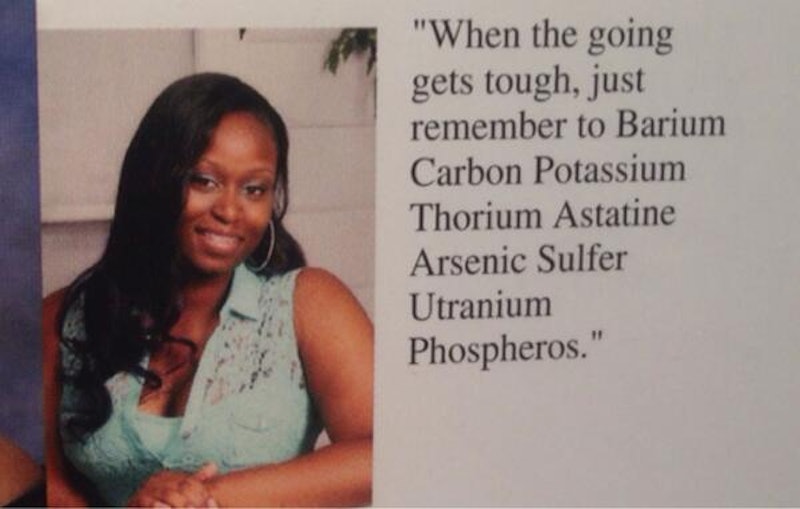 A high school student in Georgia might not get to attend graduation over a periodic table joke Paris Gray used for her yearbook's senior quote, and if that sound excessive, well, yeah. Suppose you were a good student for four years, striving to be recognized for your hard work, and excited to enjoy your upcoming graduation. Suppose, even, that you're the vice president of your graduating class. Well, hopefully you haven't told any geeky jokes, because at Mundy's Mill High School, apparently any risqué is too risqué.

That's the predicament facing Gray. An immediate, pretty upsetting aspect of this is that the kind of student who uses a joke about the periodic table as their senior quote is clearly someone for whom education matters. It's also true that teenagers, and, you know, human beings, sometimes like to joke around. No harm, no foul, right? But apparently, whatever the nature of her joke, the school's administration decided it was simply too far over the line, and would send an inappropriate message to justify letting her take part in her class' activities. So what was this grossly offensive content?

Well, here it is: "When the going gets tough, just remember to Barium Carbon Potassium Thorium Astatine Arsenic Sulfur Utranium Phospheros." What does that string of elements translate to, if you lay out their letters from the periodic table?

So... the student body VP alluded to the word "ass," so that means she's on the outs? We'd hate to shatter any illusions over at Mundy's Mill High School, but there are probably some seniors they're graduating who've even said ass out loud.

Making matters worse, this wasn't strictly just a crude reference to the song of the same name, according to Gray, but had a deeper meaning for her: "Basically, it was me just saying start all over again. You have to go back and start all over."

Her absolute devastation at the school's response is plain to see in her brief interview with WSB-TV 2 Atlanta. Tears streamed down her cheeks as she explained:

It's just— it just hurts. I... why? Why did it have to happen now? Why did it happen to me? ... Yes, I've done everything. Made music for the senior walk, couldn't even participate in it.

Gray isn't the first student to get a little clever with periodic table codes in her yearbook, nor is she the most outrageous. In 2013, high school senior Jessica Lee used a much longer string of elements to deliver a much more extreme message — Flourine uranium carbon potassium bismuth technetiumhelium sulfur germanium thulium oxygen neon yttrium. We'll let you work that one out, but here's a hint: think Biggie Smalls.

Since the administration of Mundy's Mill seems so uptight about this, and that's being generous, maybe they'd benefit from releasing a list of inoffensive science jokes, approved for yearbook use. Here are some possibilities, via Business Insider:

With such hilarious, un-obscene chemistry jokes on offer, is it any wonder why the punishment for Gray's riddle is so strident? In all seriousness, this is a really sad story, and we hope someone — anyone — will come to their senses.

More like this
How The City Healed Five Years On From The Manchester Arena Attack
By Ella Glover
Michigan’s Governor Is “Going To Fight Like Hell” To Protect Abortion Access
By Andrea Zelinski
Spice Girls’ Net Worth: The Richest Member Is Wealthier Than The Rest Combined
By Hugh McIntyre
Starbucks' Summer Menu Includes A New Chocolate Cream Cold Brew
By Emma Garza
Get Even More From Bustle — Sign Up For The Newsletter