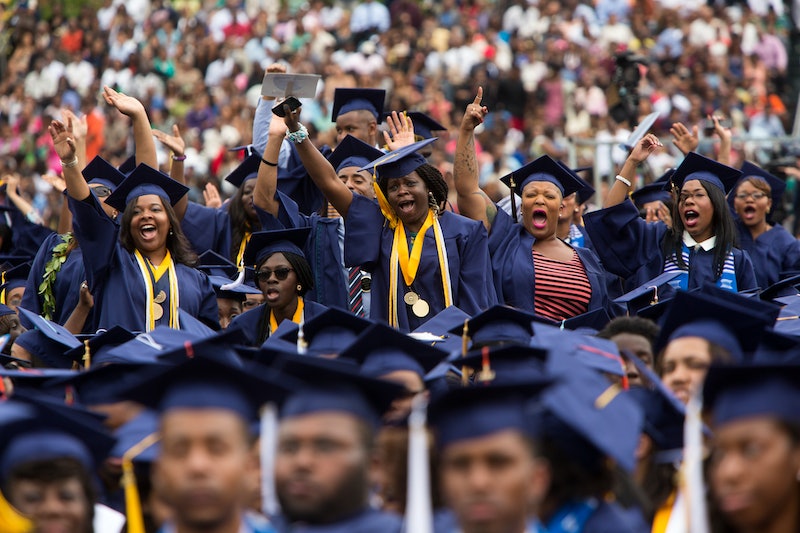 Breaking news: If you just graduated with a degree in humanities, you're in for a long ride. At least, that's according to one researcher, who argues in a study released Tuesday that it's better to have no college degree at all than one in liberal arts. As if you weren't terrified of your future career path already (or lack thereof), Dan Schawbel of Millennial Branding argues that you probably should have skipped music history and instead opted to major in something like engineering or business. Welcome to the real world.

Schawbel's study, called "The Multi-Generational Job Search," discovered that only two percent of employers are actively looking for employees that have liberal arts degrees, compared to 27 percent recruiting those in engineering and computer information systems, or the 18 percent on the hunt for business majors. Let's rub some salt it those fresh-out-the-dorm wounds: Forty-nine percent of those surveyed across generations said they believe there are "no jobs" out there for those with a liberal arts degree.

Out of the 2,978 people surveyed, the majority of hiring managers (64 percent) said they would still consider a candidate who hadn’t even attended college. So were your four years studying puppetry a fair trade-off for your student loans? Check out the best and worst humanities majors worth your money.

Get ready to become the next Leslie Knope, dedicating your life to public service and breakfast foods. Apparently, majoring in government brings in the big bucks, at least when it comes to liberal arts degrees.

An earnings report from PayScale shows that government students earn a starting salary of $43,200 and by mid-career, more than double that to $97,100.

Let's face it: making the world a better place takes a bit of money. Fortunately for IR degree holders, studying global relationships brings in a modest amount of cash, with a starting salary of $43,800 and a mid-career bump up to $83,700.

Creatives, rejoice. The days of Mad Men are long gone but the debauchery remains. Plus, you can still turn your eclectic ideas into a paycheck with a starting salary of $40,000 and an average mid-career earning of $79,400.

Apparently those days spent on the quad poring over Descartes and Aristotle weren't wasted. Majoring in philosophy can earn you a starting salary of $39,700, which can grow to $78,300 later on.

Doing exactly what though? Just one of life's big questions.

If Kanye can do it, so can you — albeit making significantly less money with a little less crazy.

Sadly, the least financially promising liberal arts majors are those that seem to cater to the betterment of society.

Child & Family Studies is the worst field if you want to make money, though we don't doubt its other rewards. You'll learn important life skills along the way, but students in this major face a median starting salary of $29,300 and a mid-career salary of $37,700. Yikes.

Sorry teachers — elementary education comes in at number 129 on PayScale's list of 130 ranked college majors. There's no question that educators make all the difference in people's lives, but clearly don't get enough compensation for their hard work. Let's not even get started on dealing with angry parents. According to the study, the median starting salary is $32,200, and $45,300 in mid-career.

Employees in this field often have to deal with emotionally-taxing cases and long days, but get paid $33,100 at entry level and only an average of $45,300 later on.

Majoring in human development brings all the skills you'd think employers value in the workplace: communication, research, critical thinking, the list goes on. It turns out however, a degree in the field it doesn't exactly translate into the big bucks — the median salary for mid-career caps out at $48,000 while new employees start out at $35,900.

It takes a lot of passion to pursue what you love, especially if you know you're not in it for the money. Just ask any journalist out there (we come in at number 72 on the list of 130, by the way). The same goes for special ed teachers, who display patience, understanding and take the time to work with each individual child in helping them advance.

While they often go through hoops to earn their qualifications and degrees, the median starting salary for special education majors is $33,900, and the mid-career salary is $48,900.

More like this
5 Crystals To Manifest More Money
By Megan McCarty
Starbucks' Summer Menu Includes A New Chocolate Cream Cold Brew
By Emma Garza
How To Fight For Reproductive Rights, Based On How Much Time You Have
By Courtney Young
The Music Industry Continues To Fail Black Women
By Precious Adesina
Get Even More From Bustle — Sign Up For The Newsletter