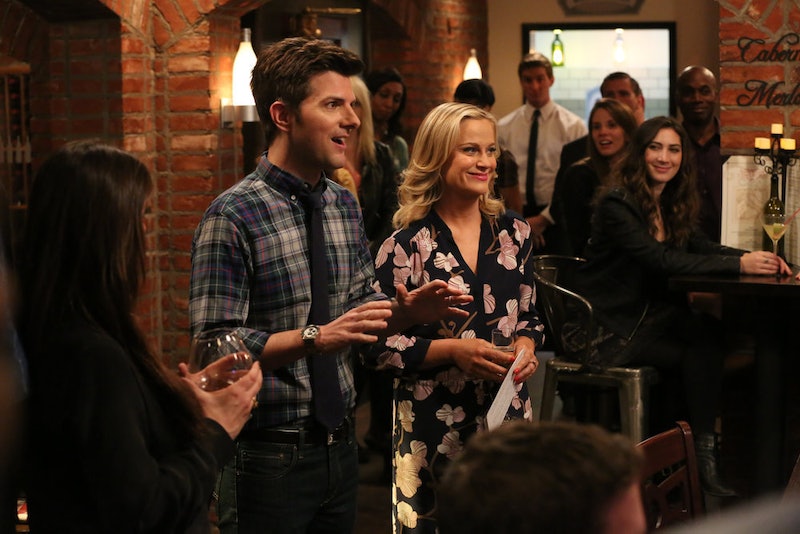 NBC's received a lot of attention recently, and a lot of it hasn't been good: there was all that backlash to Community's cancellation; the news that, for awhile, there was a pretty big chance Parenthood wasn't getting a final season; and the realization that, no matter how good their shows might be, nothing the network puts out on Thursday nights will ever be able to defeat the The Big Bang Theory. On Tuesday, some more big news came NBC's way, but this time, no one's complaining: for the first time in ten years, NBC had the highest rating out of all major networks among the most important demo for TV, adults 18-49. In other words, NBC, controversies aside, won TV in 2014.

According to TVLine, NBC averaged a 2.7 rating among the demographic, a 13 percent increase from last year and the biggest gain for the network in over 26 years. It's also the largest gain for any Big 4 network (NBC, ABC, CBS, FOX) in nine years, and that's not even counting the ratings-boosting Olympics. To make matters even better, last year's winner, CBS, typically the leading network, placed third, thanks to a 17 percent drop in ratings. Big Bang who?

Sure, the win is tiny, with NBC beating out Fox by a mere 50,000 demo viewers, and in total audience, CBS still garnered the largest following. Yet the 18-49 win is certainly reason for the network to celebrate, especially considering how, in most years, it barely holds a fourth place spot, let alone a place in the top two. The 2013-2014 season was very good to NBC, and the reasons why are clear. Between that fantastic season of Parks & Rec, the Julia-Joel story on Parenthood, and The Sound of Music Live, NBC managed to make this past year's programming original and compelling, which is a lot more than most networks can say. Add those to the surprise hit The Blacklist, the critically acclaimed Hannibal and the beloved Jimmy Fallon, and it's a shock the network's margin of victory was as small as it was.

Still, don't get too excited. This is NBC we're talking about, the network that thought it was a good idea to cancel Freaks and Geeks after one season and make a reboot to Heroes that nobody wanted. It's entirely possible that this ratings high will be a one-time thing, and that, next year, NBC will be back in its familiar fourth place position. Here's some tips for the network to avoid that all too likely future:

1. Build Up the Drama

Back in its prime, in the late '90s and early '00s, NBC's flagship shows were all comedies: Friends, Will & Grace, Seinfeld. In the years since those series' cancellation, the network has tried again and again to rebuild its "must-see TV" comedy line-up with shows like The Michael J. Fox Show, Sean Saves the World, and a million others that pale in comparison to their predecessors. Sure, the network has made some great comedies in recent years, like 30 Rock or The Office, but for whatever reason, they haven't won the type of audiences of NBC's earlier shows.

Dramas, however, have done surprisingly well. The Blacklist, as discussed below, has pulled huge ratings (for NBC, at least), and Parenthood has done impressively in its 10 PM spot. NBC's fall lineup includes a number of potential drama hits, including State of Affairs and The Mysteries of Laura (above); if the network is smart, it'll put all the energy it has into promoting those shows and redefining its brand as a drama-centric network, at least for now.

2. Give Parenthood and Parks and Rec Worthy Last Seasons

Parenthood (above) and Parks and Recreation are two of the most beloved shows on TV. They both had stellar seasons this past year despite relatively low ratings, and they both will debut their final episodes this fall. It's not totally NBC's fault that the shows haven't done as well with viewers as with critics over the years, but it's the least it can do to promote their last seasons as heavily as possible. Parenthood and Parks deserve proper send-offs, and NBC, if it knows what's right, will make sure that happens.

3. Promote The Blacklist As Much As Possible

And then there's The Blacklist. The crime drama, which finished its first year in May, is widely considered NBC's breakout series of the 2013-2014 season. It was renewed for a second year a few months ago, and was given the coveted post-Super Bowl timeslot for 2015, all thanks to a sweet 14.6 million viewers tuning in each Monday. That's just a little under what Grey's Anatomy gets, and it makes The Blacklist the third most watched drama on network TV. If NBC puts in heavy promotion and gives the show all the support it wants, there's no reason The Blacklist couldn't move that title up even further. The network knows what to do — the question is, will it actually do it?

The Voice isn't a bad show. It gets a strong amount of viewers, has won more than a few awards, and steadily beats Idol in the ratings. Yet it's just not interesting, no matter how famous the judges may be. There hasn't been a contestant who's gone onto to Kelly Clarkson- or Carrie Underwood-type success, or a backstory or controversy fascinating enough to make the next day's headlines. It's a safe show, which, while fine for a typical network, is not beneficial for a channel as frequently struggling as NBC. Whether it's switching up the routine, getting some exciting contestants, or just doing something to make it stand out, NBC needs to make The Voice the must-watch TV it has the potential to become.

NBC's 2014-2015 line-up has one great theme: feminism. From State of Affairs (above) to Marry Me to The Unbreakable Kimmy Schmidt, a large amount of the network's upcoming shows revolve around complex, non-cliched women. Sure, ABC has Scandal, and CBS has The Good Wife, but NBC is the only Big 4 network to have such a female-friendly roster on the way. Whether the station knows that, however, and has plans to benefit from it, is a different story. NBC, consider this your head's up: don't just sit there and let your amazing, unique programming go on without noting that you're making a difference. Be "the feminist network," and impress critics and viewers alike with your forward-thinking line-up. Trust us, we'll respond.