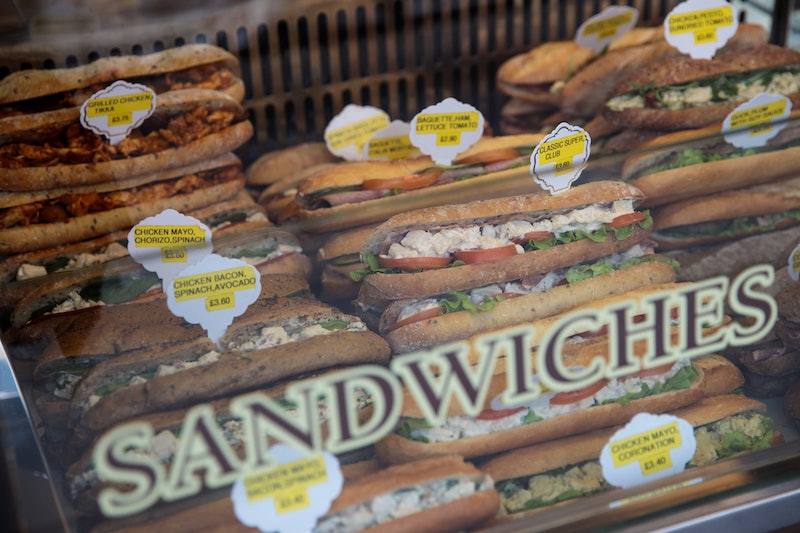 Remember Stephanie Smith, the NY Post writer behind the blog 300 Sandwiches (in which she documents her quest to get engaged after her boyfriend tells her she is 300 sandwiches away from a ring)? It looks like her quest to cook her way to a marriage proposal worked — and she didn’t even have to get all the way to number 300, either! According to a post Smith published on her blog today, her kind-of-maybe-Alexander-Skarsgaard-lookalike-if-you-turn-your-head-and-squint significant other, E, finally popped the question while they were vacationing in Barbados last week. She was on sandwich number 257, a whole 43 sandwiches short of the mark.

E himself documented the whole setup on the 300 Sandwiches Facebook page; from what I’ve been able to determine from the pictures, it involved a swimming pool and a heart made out of flower petals. Obviously this is happy news for them, so congratulations to the couple; furthermore, as Erin Gloria Ryan over at Jezebel put it, “the two got engaged under less craven circumstances than a carefully choreographed book party photo op while the 300th sandwich is presented to him with a flourish in exchange for a ring.” That would have taken aaaaaaaaaaaall the romance out of it.

While I will admit that most of the sandwiches Smith put together sound absolutely delicious — who doesn’t love a good sandwich? — I know that I am very far from alone in feeling a little irked by 300 Sandwiches’ premise. There are a lot of reasons for the irkedness (which, by the way, is definitely a word I just invented): First, as The Gloss noted back when Smith landed a book deal, 300 Sandwiches was clearly designed to lead to said book deal — and that just kind of rubs me (and probably a lot of other people) the wrong way. Smith, after all, is a writer for the Page Six section of the NY Post: “She knows what gets people to click on things — every writer on the Internet does,” Samantha Escobar wrote at the time. “Her 300 Sandwiches blog is so well packaged that the entire internet was clicking on it — multiple times — from outrage.” We love the sort of grass roots Internet popularity stories that brought about the rise of The Fug Girls and Suri’s Burn Book; but when the end goal is transparently something like, “I will get a book deal and I will be famous and literary and amazing,” it feels like we’re being duped. Does it make sense that we feel this way? Not really... but we feel like it anyway. Or at least, I do.

The more troubling reasons, though, are those we discussed when 300 Sandwiches first came to our attention back in September. Why is a proposal something a woman needs to earn by demonstrating that she’s “wife material?” Why is that demonstration dependent on being able to cook instead of, say, being able to change a flat tire, or something else less traditionally “feminine?” Why doesn’t the man in this case have an analogous task that demonstrates to her that he’s “husband material?” And most importantly, isn’t the decision to get married something both partners should arrive at together, rather than as an Iron Chef-type challenge?

Smith made 300 Sandwiches an incredibly public project, so of course people — including myself — are going to be talking about it. I suppose at the end of the day, though, if it works for them, so be it. Go forth! Wed! Continue to feed yourselves gourmet sandwiches from the warmth and comfort of your marriage bed! And, in the words of Jezebel, go away forever now — please!