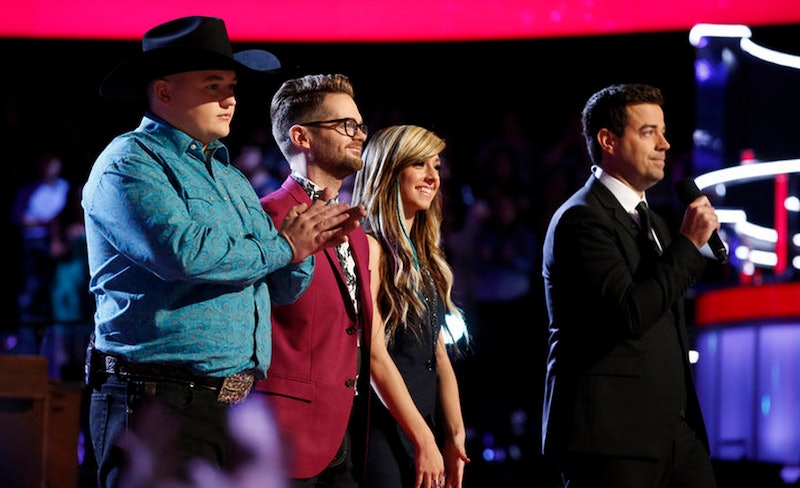 There were a whopping two hours (three, if you count the totally necessary hour-long pre-show recap of Monday night’s episode) (can you sense my sarcasm?) of Voice finale to wade through Tuesday night. Part of me worried that the results would never actually happen. Alas, my anxiety was all for naught! The show didn't cut out before the winner was named. Carson Daly didn’t pull any last-minute stunts. There wasn’t a “JUST KIDDING! The winner will be announced next week! And the Instant Save will return!” moment. (There was an “Oops! The iTunes voting has to be tossed out completely due to a glitch! Don’t worry, it didn’t effect the outcome!” moment.) As Carson promised, the winner of the sixth season of The Voice was crowned.

So, was it the soulful Josh Kaufman? The teen powerhouse Christina Grimmie? Or darling country crooner Jake Worthington?

Enough jibber-jabber, let’s cut right to the chase: Christina landed in the third place spot (WELP, my prediction that she'd win the whole thing was off), Jake took second, and Josh won the show!

YAAAAAAAAAAAAAAAAAAS!!!!!! Oh, this makes me so happy. What a slam dunk of a win. Josh possesses such a dynamic, strong, and freakin' beautiful voice. And! He's been consistently awesome throughout the season. AND!!! I really like him! So stoked he won.

Looks like we made it. Look how far we’ve come, my friend-ay. We mighta took the long way, we knew we’d get there someday.