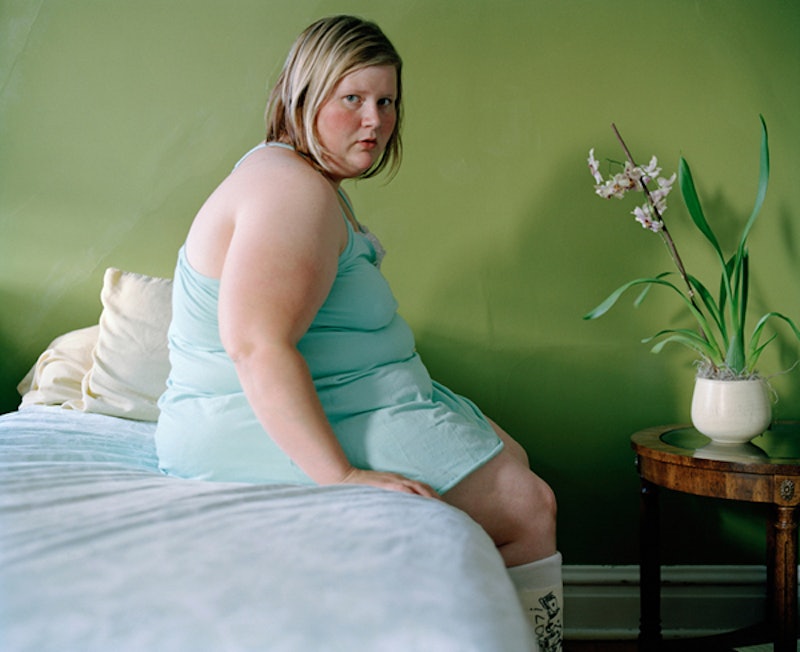 In 2002, photographer Jen Davis began a self portrait photo series. Her goal, she says, was to understand herself better and to help her come to terms with her body, fat and all. As a large woman, though, the project wasn't easy. In the beginning, Davis says, "I was never really comfortable putting myself in front of the camera." But she kept taking pictures anyway.

The series, which continued for over a decade, is coming out this week in the form of a book called Eleven Years, and will be accompanied by a show starting Thursday at NYC's Clampart gallery. The photos capture the loneliness and vulnerability Davis felt during that time, from her days as a young undergraduate in Chicago to a woman in her mid thirties based in Brooklyn.

In one of her first photos, Davis sits on a beach, fully clothed in shorts and a tank top, while around her are three people, all of them much skinnier and dressed in much more revealing swimwear. The photo is titled "Pressure Point," and in many ways it sets the tone for the series. The woman in the photos often seems isolated or sad, and indeed Davis says that during this time in her life she had difficulty connecting to other people. "I was making myself vulnerable only for the camera," Davis says. "What I really wanted was to be vulnerable for another person."

In 2011, nine years after she first started taking pictures, Davis realized that in nearly a decade of photographs, her body hadn't changed at all — and that she hadn't really changed either. It was a painful realization, and made her certain she needed to make a change in her life. She decided to get lapband surgery, and immediately began losing weight. Since then, she's also started exercising regularly and has lost 110 pounds. She says her life is happier now that she's slimmer. "I feel like there are more opportunities, more possibilities. I feel like, 'I deserve this, too.'”

All of which is wonderful, though it would also be nice to live in a world that didn't judge women by their weight, and that made it easier for women to love and accept themselves whether they lost weight or not. Still, in the midst of our fat-shaming society, it's hard not to cheer for a woman who struggled and found happiness in spite of it all.

More like this
Designers Say If Your Home Doesn't Have Any Of These Things, It Looks Outdated
By Claire Epting
Bustle Daily Newsletter: December 2, 2022
By Hayley Schueneman
The Best Furniture For Your Tiny Apartment Under $100
By Kate Brierley
Walmart's Pre-Black Friday Sale Is On — And Here Are All The Cool Things Worth Buying
By Kate Marin
Get Even More From Bustle — Sign Up For The Newsletter