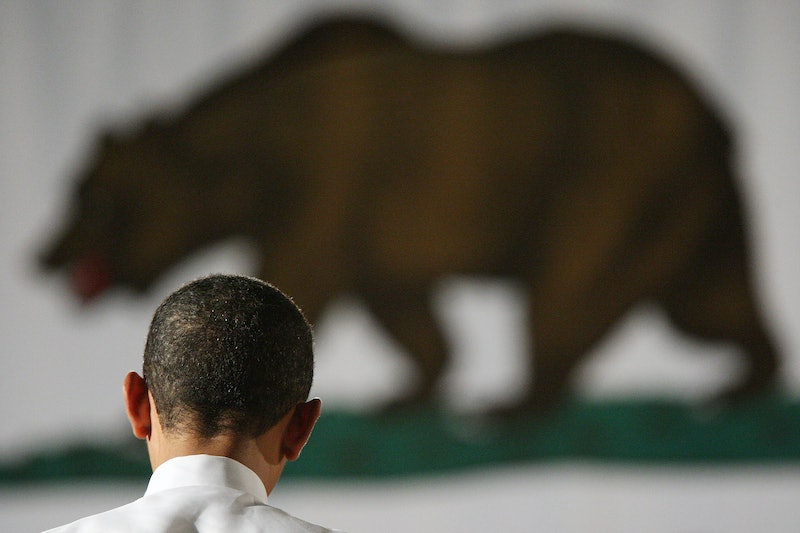 President Barack Obama reportedly cracked some self-referential humor on Wednesday, when, while walking into a meeting at the Department of Interior, said "the bear is loose. ... It's good to be out." Yeah, he was apparently talking about himself. You know it's midway through the second term when the president is literally referring to himself as an animal locked in a cage.

The president was heading to the Department of Interior on Wednesday to designate the Organ Mountains-Desert Peaks as a National Monument when he made the comment, which reporters started mentioning on Wednesday night after a report from the White House pool was released. The pool report mentioned that Obama made the comment "exultantly." A Twitter account called "Bear Obama" was immediately created in the wake of the cracked-joke carnage.

Obama continued to allude to his need for a little time outside the confines of the Oval Office at the event. Sally Jewell, the Secretary of the Interior, mentioned to reporters that Obama told her he "needed to get a little outdoors." Then, during his speech, he mentioned how stir-crazy he was...again:

I think about the memories of what it’s like to go on a hike without a security detail behind me. It’s a wistful feeling.

Here are some other ridiculous self-referential things Obama probably wants to say whenever he arrives somewhere that isn't the White House.

1. The Eagle Has Landed

2. The Package is Secure

Whoops, this is actually what the Secret Service says once the President is back behind the White House gates.

3. The Leader of the Free World Hath Arrived in This Location

Nice because it is succinct.

5. The Horse is Out of the Barn

Obama celebrates his freedom by galloping through the press corps like it is some sort of wide open pasture.