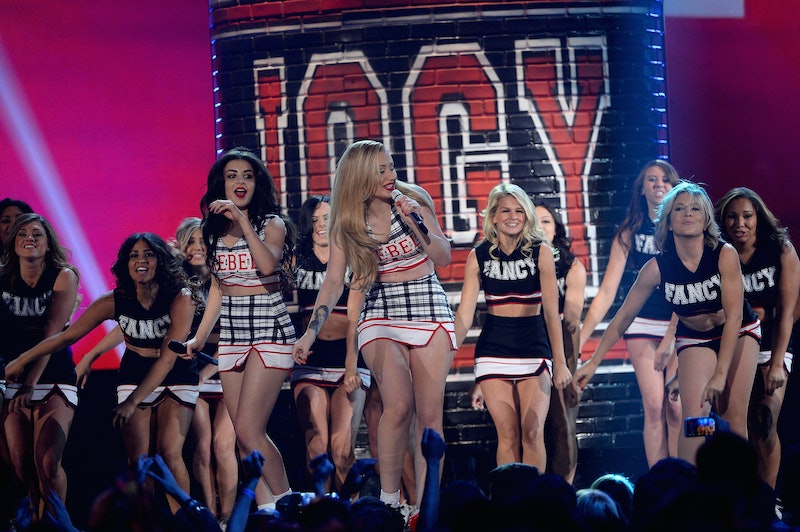 The Internet is ablaze this week after Forbes dubbed Iggy Azalea, an Australian-born rapper, the undeniable leader of hip-hop. Initially, the headline on the piece was "Hip Hop is Run by a White, Blonde, Australian Woman," but the publication altered it to "Hip Hop's Unlikely New Star: A White, Blonde, Australian Woman" following reader outcry. The provocative headline could’ve been an asinine attempt at racial satire — if the writer hadn't attempted to support his absurd declaration with a written ode to all things Azalea.

With just 10 words, Forbes managed to both overlook the important contributions of a legion of hip hop artists, while also appointing Azalea hip hop’s white female savior — a position that, in my opinion, need never be filled. An excerpt from the piece reads:

Iggy isn’t the first woman to find success in the genre, but she is the latest and currently the only one representing the gender on the charts. For the past several years, Nicki Minaj has been the prominent woman in hip hop, but it seems there has been a change. Not only has Minaj been oddly quiet for months, she has said she will no longer be releasing radio-ready pop/hip hop blends, instead going back to her pure rap roots, leaving a void to be filled by none other than Iggy.

Hip-hop is in some ways a sport, so it’s normal for ears to perk whenever prominent draftees create ripples. And Azalea’s talent is undeniable. Her debut album, The New Classic, is sitting at number three on the Billboard 200 chart. She’s also the first female rap artist to have two simultaneous singles in the top five slots on the Billboard Hot 100 chart.

Of course, aligning herself with T.I.’s Grand Hustle and signing with hip-hop’s most successful label, Def Jam Records, boosted Azelea's credibility immediately — as did going to war with contemporaries like Azealia Banks. As Forbes notes, Azalea's accomplishments are laudable because there are so few prominent female MCs in hip-hop.

But we simply must acknowledge that Azalea’s meteoric rise in the male-dominated hip hop culture has as much to do with her whiteness as it does her talent.

The hip hop star's skin color, blonde hair, slim figure, and propensity for twerking is an embodiment of white privilege. Azalea has been able to appeal to multiple audiences without encountering the kinds of obstacles that her peers like Banks and Angel Haze have endured.

It is, in fact, the privilege of being white that allows Azalea to be declared hip-hop’s preeminent figure when her album sold 52,000 copies in its first week, even though Nicki Minaj’s 'Pink Friday' sold 375,000 in its week-one debut.

The grind Minaj embarked on to be recognized as elite — like battling several leading male rappers on Monster and releasing three mixtapes before signing a major label deal — has never resulted in this kind of Forbes nod.

Instead, hip-hop critics (especially white ones) debate Nicki Minaj’s (hyper)sexuality, her level of talent, and overall hip-hop credibility. Despite Minaj's commercial success, the doors opened wider and freer for Azalea, and with far less effort. That isn’t accidental.

Other white female rappers have been afforded similar access passes. Kreayshawn was an Internet sensation after the viral success of her single Gucci, Gucci. She and her White Girl Mob crew were praised for livening rap music, even as black hip-hop enthusiasts questioned her authenticity. After her debut album tanked, Kreayshawn disappeared from most rap radars, but that hasn’t been the case for one Miley Cyrus. And no, Cyrus isn’t a rapper, but she has certainly aligned with hip-hop in order to obtain freedom from her Disney Channel-image.

"It continues a long tradition of what bell hooks might refer to as 'eating the other,'" Professor Akil Houston told VICE recently. "Hooks noted that within commodity culture, ethnicity becomes like spice seasoning...Though you do have more visibility for artists of color [today], the same kinds of dynamics still occur. The general public is unaware of artists of color who are punk, country, alternative, or any other label record companies use to identify them. To some, these artists appear as outsiders."

White outsiders in hip hop, on the other hand, are celebrated.

Understanding that Azalea and her white female contemporaries encounter fewer barriers is important to contextualizing their presence in hip-hop. It isn’t solely Azalea’s work ethic and talent that’s catapulted her to the Billboard 200 chart. Despite Azalea’s much-deserved success, she isn’t hip-hop’s savior. And if you ask me, it's downright offensive to crown her as such.