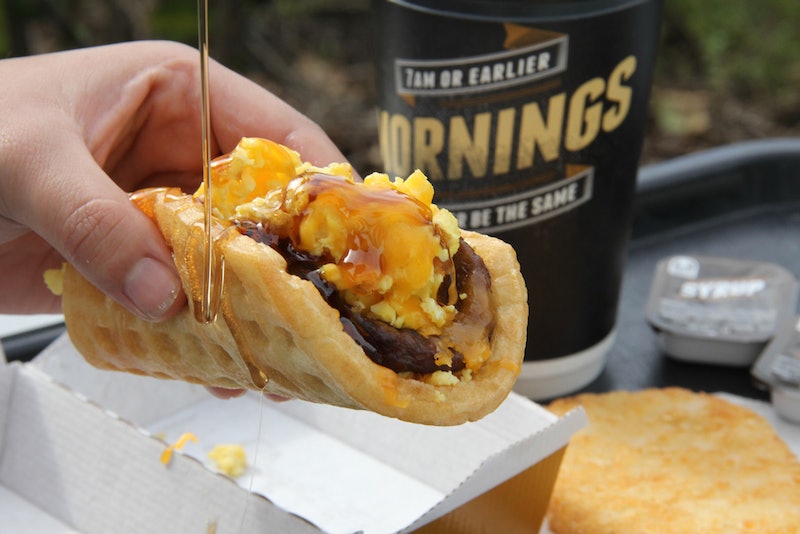 2014 isn’t even half over yet, and it’s already brought us a staggering selection of fast food monstrosities I can’t believe exist. I mean, between Taco Bell’s Waffle Taco and Pizza Hut’s fried chicken crust pizza thing (although I maintain that they sound more like fried chicken nachos), how many more Frankenfoods can the fast food industry bring to life? Answer: As many as it damn well pleases — and thanks to Slate’s amazing fast food generator, now we can have a piece of the action ourselves. Yum?... Or something?

Here’s how it works: First, plug in your name (don’t worry, it won’t share anything without asking you first); then, move the sliders representing five different types of cuisine — American, Asian, Italian, Mediterranean, and Mexican — around until you have a flavor profile you like. Then click the “Generate” button and let the magic happen. I know from experience that it’s an excellent way to eat up (no pun intended) your time, because I just spent about half an hour grossing myself out with it.

I started with a baseline of sorts — a control fast food freak, if you will. By keeping all of the sliders right in the middle at “OK,” I created…

Um. Wow. I like oranges... I like licorice (yes, even black licorice)… and I like hoagies… but together? No. Just no. So I tried it again to see if I could create something better.

This time, I chose “Gross” for American, “Delicious!” for Asian, “Meh” for Italian, “OK” for Mediterranean, and “Good” For Mexican. That gave me…

Better. Still not great, but better. I’m not sure if savory sticky buns are a thing yet, but maybe my sesame salsa variety could make them one.

Setting everything to “Delicious!” yielded the following intriguing-sounding entrée:

Although I’ll be honest: The most exciting thing about this particular result for me was the name of the restaurant. If this whole writing thing falls through, I’m totally opening a seafood joint called “Lucia’s Gobble Shanty.”

Lastly, I decided to find out what happens when everything gets set to “Gross”:

That actually sounds pretty promising! If I give it a new name — say, a “Croisscuit” — maybe I can add it to my list of hybrid pastries I’m hoping will one day become a reality!

Since it might be a while before any of these wacko combinations become widely available, though (and with luck, they never, ever will), you can still DIY your own. Pixable, for example, has a whole bunch of fast food hack ideas that will let you consume everything from a “Land, Air, and Sea” to Thai iced tea from McDonald’s; and if that’s enough for you, check out Hack the Menu, which touts itself as the ultimate secret menu source. Anything’s got to be better than an orange licorice hoagie, right?