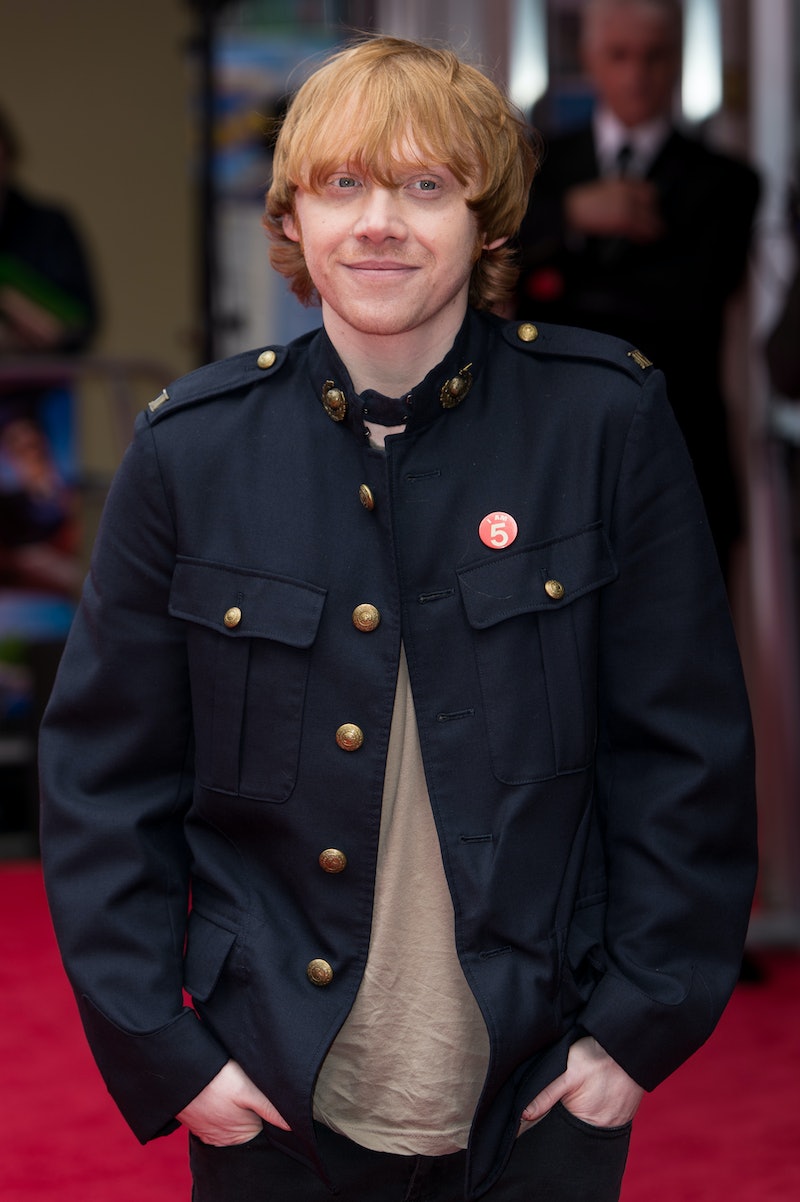 Of all three Harry Potter leading actors, Rupert Grint has had the toughest time finding his path since the movies' end. While Daniel Radcliffe shined on Broadway and Emma Watson turned into a movie star, Grint floundered, shooting pilots that never aired and co-starring in little-seen indies. Now, though, it seems the former child star has finally found his calling, in a field no Potter fans saw coming: singing. Apparently, it turns out, Grint recorded "Lightning," a song for Postman Pat: The Movie , a British animated comedy, that was featured on the film's soundtrack. The shocking thing? He's actually not half-bad.

With Grint's surprisingly smooth vocals and an annoyingly catchy beat, "Lightning," an upbeat pop track, is reminiscent of Ed Sheeran or back-in-the-day Jesse McCartney. While it might be too soon to suggest that Grint change his career path, the song certainly makes a strong case for him to at least consider pursuing music some of the time, especially given his post-Potter acting struggles.

Still, seeing Grint as a singer, even part-time, will take some getting used to. After all, this is Ron Weasley we're talking about, a boy whose previous musical experience consists of humming along to the Gryffindor version of "Weasley is our King." Without a doubt, being featured on the soundtrack to a kids' movie is definitely the most un-Potter project Grint is done so far, and it's going to be a long time before his fans can come to terms with his changing public image.

Lucky for him, though, he won't be the first Potter actor to throw fans in a tailspin by picking a project totally unlike his character in the movies. The nine most un-Harry Potter films, TV shows, and more cast members of the franchise have done:

In 2007, a 17-year-old Radcliffe began starring in the West End production of Equus, playing a disturbed teen dangerously obsessed with horses. A year later, the play moved to Broadway, and American audiences got the pleasure of seeing a stark-naked Harry Potter run around on-stage. Hey, Moaning Myrtle: we get it now.

This picture. That dance. HERMIONE.

Making fun of himself? Draco Malfoy would never do that. Kudos to you, Tom Felton.

Wright has made an impressive career out of modeling, appearing in photo shoots for magazines like InStyle, Nylon, and Vanity Fair, but it's a far cry from the after-school activities of her Potter character; can you imagine Ginny (the book version, at least) having her days revolve around clothing and catwalks? She'd sooner hang out with the Carrows.

In the 2015 live-action Cinderella adaptation, the actress known to Potter fans as the evil Bellatrix Lestrange is said to play the Fairy Godmother. Only dark magic can explain that type of transformation.

Ralph Fiennes is an Oscar-nominated actor whose career has spanned over three decades. There's no reason Potter fans shouldn't be able to differentiate his typical acting roles from his work as Voldemort in the franchise. But sometimes it's just really hard, okay?

Thought separating Fiennes from his Potter character was hard? Try seeing Alan Rickman as anyone but Snape: it's impossible. The actor just is Snape, no matter what kind of outfit he wears or how much grease he uses in his hair.

Britishness aside, Smith's Dowager Countess is nothing like Minerva McGonagall. The Hogwarts professor would have absolutely no patience for family drama or the rules of the aristocracy.