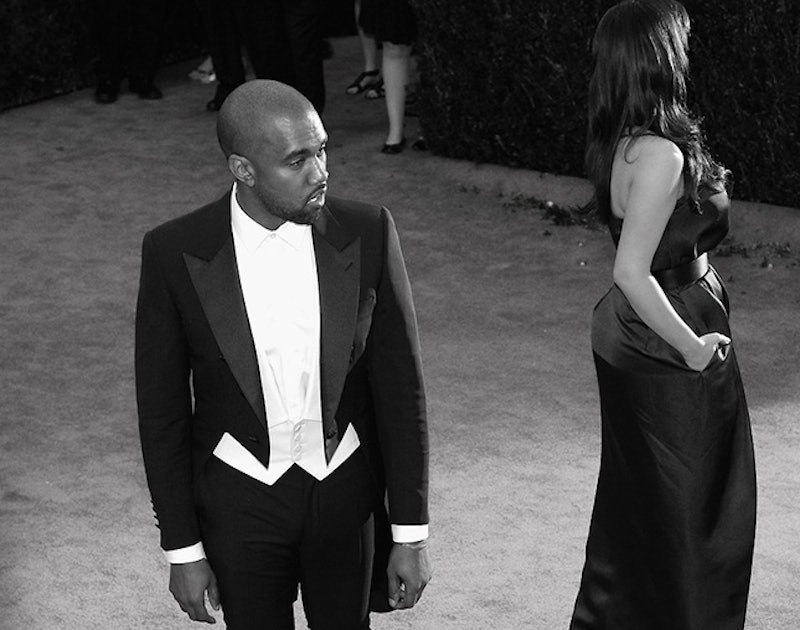 The big day is nearing, y'all. I know, I know — you're on pins and needles waiting to see what Kim Kardashian will be wearing for what will be her most extravagant wedding yet. But what about Yeezy?! Lest we forget how fashion-obsessed the rapper is. Kardasian has even admitted that her style has shifted because of her husband-to-be's influence. So while all eyes might be on her this weekend, I'm just as curious to see what sort of custom Lanvin/Dior/Valentino creation Kanye will show up at the chateau wearing.

Of course, should there be some sort of luggage disaster or building fire that puts Yeezus' handsome wedding ensemble out of reach for the day, I've compiled a handy list of eight other outfits he can choose to wear instead. Since West came on to the scene in the early 2000s, there have been countless memorable get-ups that have been engrained in my brain, from his LV-monogrammed backpacks to his collar-popped pink polos. Although he's become less playful with his fashion these days, sticking to a palette of neutrals and blacks, I hope he manages to incorporate some of my favorite pieces from his fashion past on his big wedding day. I see you, Polo bear graphic tees!

I know security is supposed to be super tight at this wedding and that they're f̶o̶r̶c̶i̶n̶g̶ politely requesting guests to leave their phones behind, but you never know which sneaky relative will manage to pull a fast one and snap a pic with their Google glass! For this reason, West should definitely bring back this bejeweled beauty. Because nothing says secret wedding more than a diamond-encrusted face mask, amirite?

You guys remember when West was OBSESSED with the Polo Bear? I mean, so was I, but he repped that little guy so hard. I hope he makes an appearance somewhere on West's wedding ensemble. How great would that be?!

West used to be the King of Hip Hop Prep. And it was so good! The pink argyle sweaters with the pink pants to match. I feel like Kim would really appreciate this look, no?

I'll admit it: I totally bought a pair of these right after I saw West rock 'em during his Graduation-era. You didn't actually have to look at anyone when they were talking to you andddd you could take mini-naps during lecture. Wedding ceremonies are long. West is probably tired (because it's tiring being Kanye West) and could use a snooze. These should help him out at the altar.

There was a weird experimental phase of West's fashion journey when he decided to rock a mullet. During that time, he also wore a lot of satin gloves, military jackets and Thriller red. It may not have been the height of his personal style, but hey, it was fun!

Once upon a time Kanye West was obsessed with flashy labels, so much so that he hired a crew of of people to walk around with him to show off as much fashion as he could. Maybe he and his groomsmen can recreate this entire look?

The forecast for Florence is a sunny and hot 82 degrees this weekend. But, you never know — it could start pour. Cue: Alanis Morisette.