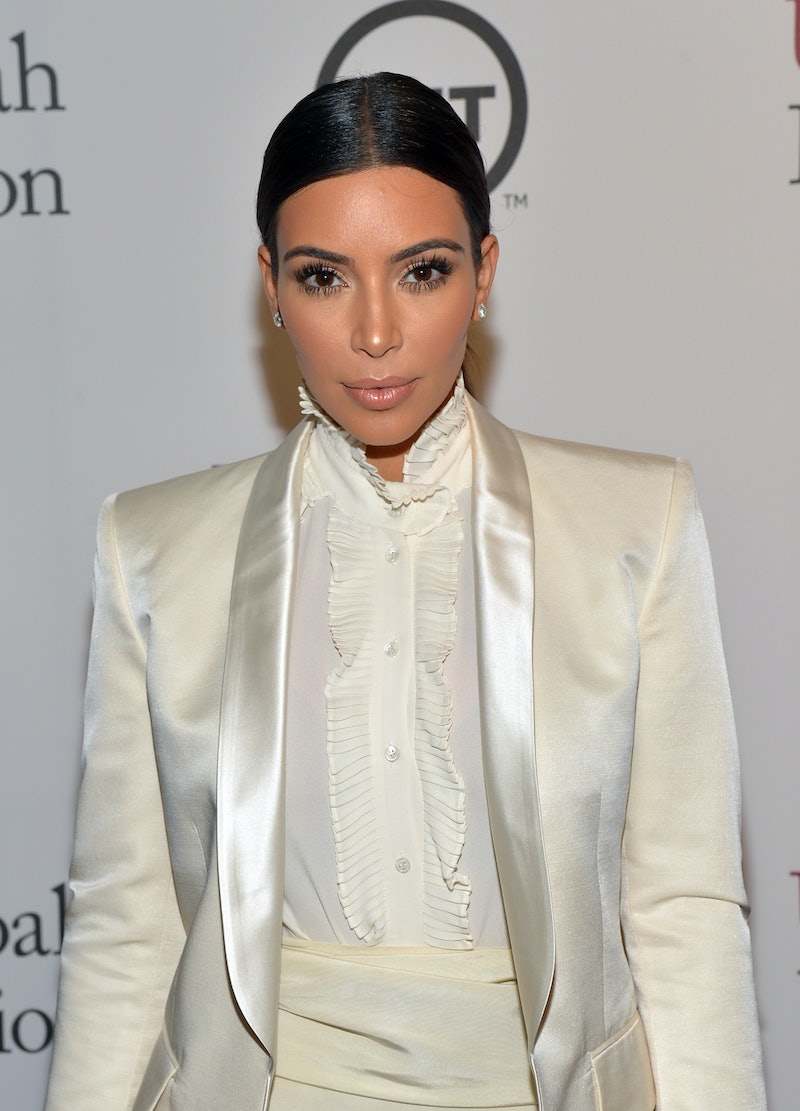 Bad news, Kardashian groupies: Kim took to Twitter on Wednesday to clear up all the rumors and speculation that have been surrounding her wedding to Kanye, and it appears none of us are invited. The ceremony, devastatingly, won't be broadcast on Keeping Up With The Kardashians and any of those photos you've seen circulating of Kardashian in a wedding dress? Totally 'shopped.

There have been lots of theories about who will design the white gown for Kardashian's third nuptial ceremony. Vera Wang created the classically tasteful number she said her vows to Kris Humphries in, and, considering how well that one worked out, she probably won't be going back to the ubiquitous designer this time around. Balmain's Olivier Rousteing seems to be most likely designer choice for Kardashian, though the names Lanvin and Givenchy have also been tossed around. I, for one, hope she throws us all for a real twist and picks something out at David's Bridal. After all, this is the third wedding — how many times do you really want to drop a ton of cash on a dress you'll wear for a couple hours?!

No doubt photos of the actual gown will surface soon, but I'm getting pretty freaking impatient. So, in honor of perpetuating rumors, I present you with 5 dresses I would seriously love Kardashian to strut down the aisle in. Thank you, KimYe, for your consideration.

Kanye West loves a good umbrella moment. He, as well as I, would flip the eff out if Kardashian walked down the aisle in this saucy little Reem Acra number carrying such an elaborate veil.

The third time around, there's no need to be traditional. I hope Kardashian just goes for it and decides to wear any color other than white. And that there's a massive flower just stuck to the front of the whole thing. All jokes aside, though, the peachy-pink color of this Vera Wang gown would be gorgeous on her.

Margaery Tyrell and Princess Leia would look equally fabulous in this floor-length, metallic gown. Kardashian, too.

Don't laugh! This looks so comfortable! If Kardashian gets tired halfway through her reception, she can just snuggle up inside and take a little nap. Practical and chic. One question though: are the models arms are inside this dress? I hope so.

Kardashian's like, "You haven't seen my dress yet!" But what if we have. She's just been wearing it out in public, fooling us all like the little prankster she is.