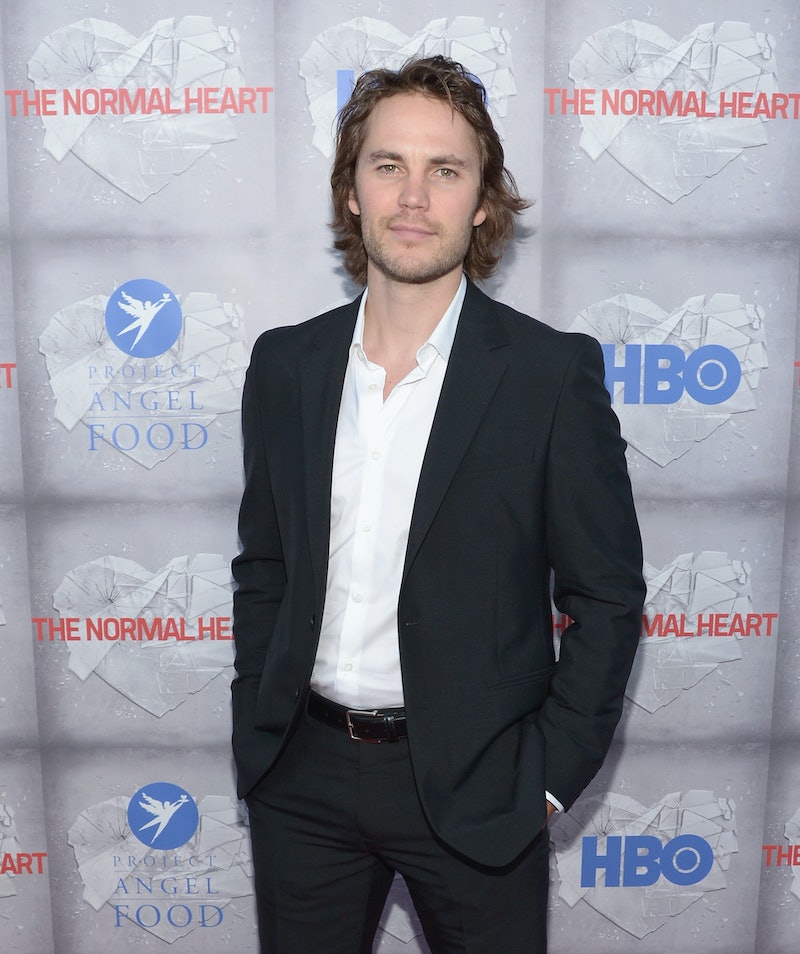 There are a lot of reasons to watch the premiere of HBO's The Normal Heart this Sunday and one is a bit more superficial than the others—Taylor Kitsch is in it. All of the other great things about the movie are kind of added bonuses: the important subject matter, the rest of the impressive cast, the promising trailer. Any Friday Night Lights fan probably would've watched the movie even without all of that, so it's exciting to know that we can see Tim Riggins in something that's probably going to be legitimately good. To promote The Normal Heart and his upcoming film The Grand Seduction, Kitsch spoke with Variety and revealed a lot about himself in the brief interview. Here's what we learned.

He Uses the Phrase "All you can Kitsch"

When Variety's film editor Ramin Setoodeh told Kitsch that he watched both films the night before, his response was, "Oh man! All you can Kitsch." This might be the most glorious phrase of all time and should immediately enter the greater cultural lexicon. "Hey man, what'd you do this weekend?"

"Not much, just watched some Friday Night Lights and finally saw Lone Survivor."

"Nice! All you can Kitsch!"

He Likes to Talk Dirty

Apparently The Grand Seduction includes a phone sex scene (so add that one to your list of things to watch) and they had to stop at one point because Kitsch was improv-ing and took things a little too far. Maybe Kitsch has something in common with Riggins.

It seems that for Kitsch, going off-script is pretty uncommon. He told Setoodeh that he's "a big guy on instinct," especially in smaller independent films. However he also does a lot of research when a role requires it, as The Normal Heart did. Kitsch plays Bruce Niles, a closeted Wall Street banker, and used letters and documentaries to try to understand the character better, in addition to spending time with the film's writer, Larry Kramer, to get more notes on his performance.

Kitsch also said, "Wardrobe is a huge thing for me in any gig," so now we know he must really love cowboy boots.

In The Normal Heart, Kitsch has neatly styled blonde hair and revealed that not only did this mark the first time he'd ever dyed his hair, but really the first time he'd put any real effort into it. "I didn’t even know what a blowout was until this movie. I don’t remember the last time I combed my hair."

So that means that all of those times Tim Riggins' hair was perfectly framing his face or majestically blowing in the wind, it had just sprouted out of Kitsch's head that way. Hopefully in his next interview, Kitsch will reveal what magical shampoo he uses.

There Could've Been a John Carter Sequel

We all know that John Carter didn't exactly turn out to be Kitsch's big movie break the way it supposed to, because it was you know, a terrible movie. But if we'd all just gotten past that and gone to see it, then the planned sequel would've actually been made which, according to Kitsch, was "fucking awesome" and "more emotionally taxing." Thanks a lot, 2012 me, you ruined the opportunity to see a brooding, shirtless Kitsch.

He Wants to Direct

Kitsch wrote and directed a short film called The Pieces about a drug drop that goes awry and was recently given full funding to turn it into a full-length movie. Hopefully in terms of quality, it'll be more like FNL and The Normal Heart than John Carter—especially since Kitsch will be spending his time behind the camera.