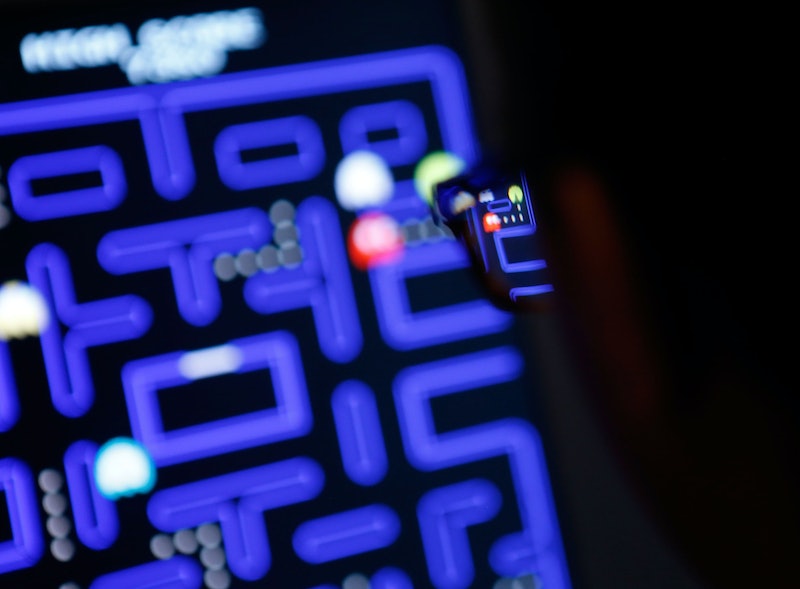 I've said it before, and I'll say it forever: The order of the best things in life goes, 1) Cats, 2) Cheese, 3) Friends and family, 4) News bloopers. But that order might be different when it comes to old news bloopers. You know, news bloopers from the 1970s and 1980s that sat in a vault for years before getting the appreciation only the Internet could give. It's like digging up hidden treasure. Discovering a roll of undeveloped film. Finding that unopened bottle of Orbitz from 1997 in your old bedroom. (Just look, don't drink. Trust me.) And believe me when I say that this old newscasts from the 1980s trying to explain Pac-Man is as good as a soft drink with the consistency of marbles.

Though not a blooper reel, per se, the video about the popular arcade game — which still exists in movie theaters but hit its peak in the decade that also brought us Pee-wee and puffy sleeves — features bewildered reporters talking about the game's simple concept, describing it with such sentences as "you must eat energizers and Pac-Men before they eat you. Eating energizers will give you the ability for a short time to eat Pac-Men." My god, I would love to

Though the majority of the video focuses on a young boy named Craig who's attempting to win a Pac-Man tournament in 1982, the video turns from funny to poignant when it recognizes the first trappings of video game addiction while trying to explore why people love Pac-Man.

Whenever you challenge a video game, you're really playing against yourself. Even if you get a high score, the machine can always go higher. Perhaps this is the attraction with video games — you really don't win or lose. You just do better or worse.

And that exactly describes why you spent two-thirds of your freshman year in college playing Halo. But do yourself a favor and watch at least the first minute, if only to imagine how these reporters would explain Myst .

More like this
Heinz Just Relaunched A Bean-Tastic '90s Fave
By Sam Ramsden
Try These 3 Manifestation Rituals To Feel Healthier Than Ever
By Brittany Beringer
Footballer Jake Daniels Shared His Thoughts On A World Cup Boycott
By Sam Ramsden
Then Vs. Now Photos Of The 'Enchanted' Cast In 2007 & The Sequel's Stars In 2022
By Marina Watts
Get Even More From Bustle — Sign Up For The Newsletter