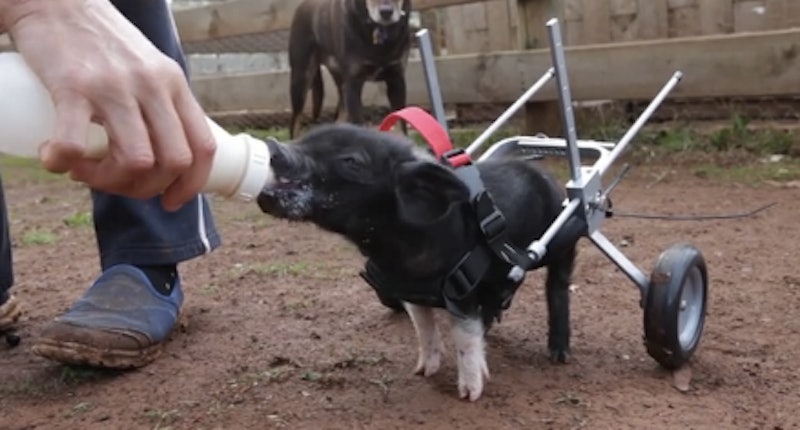 The same thing will definitely happen to you upon watching the video below. Meet Leon Trotsky, named for the man who also inspired Animal Farm's Snowball, who is now living a normal life of a pig with the help of a wheelchair fashioned especially for him. His background is upsetting — he suffered femur and ligament damage after his mother accidentally fell on him shortly after he was born — but after being adopted by animal rescue farm Edgar's Mission in Australia, he brings us an sight that is nothing less than uplifting. Not to mention so gosh darn cute, especially when you consider that Frostie, the aforementioned wheelchair-bound goat, is also a resident of Edgar's Mission. Let me guess — you've already booked your next vacation destination, right?

Who else wants to go to here?

More like this
21 Absolutely Adorable Christmas Gifts For Dogs
By Carolyn Steber
What Does “The Rizz” Mean On TikTok? The Viral Slang Term, Explained
By Alexis Morillo
The 10 Memes That Defined 2022
By Alexis Morillo
This AI Filter Shows How You’d Look In Different Time Periods
By Alexis Morillo
Get Even More From Bustle — Sign Up For The Newsletter