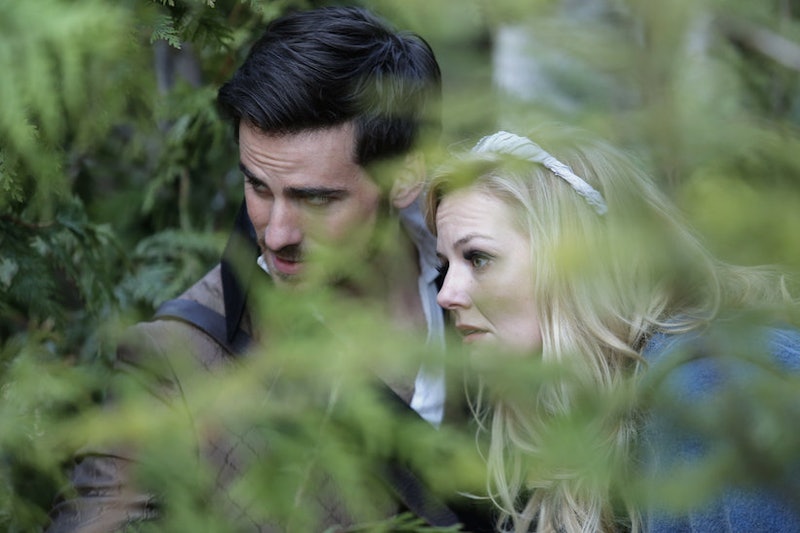 Don't say, "Happily Ever After," just yet. Once Upon A Time 's Season 3 finale aired just shy of two weeks ago and we're already ready for Season 4 — especially with that HUGE Frozen reveal and cliffhanger. But, as excited as we are to see Elsa and the Frozen gang, how could we ever forget about Emma and Hook? Or the quick deterioration of Regina and Robin Hood's happily ever after? Edward Kitsis and Adam Horowitz's OUAT Season 4 spoilers reveal a lot about the future of our favorite 'ships, so will any of our favorite couples survive?

I can't say I was disappointed in how Season 3 ended love-wise. (That Captain Swan kiss! Swoon.) Well, I was a little disappointed and sad that Regina, unfortunately, lost her happy ending. But I was wondering where we'd go from here. Rumpelstiltskin and Belle tied the knot even though their engagement was fundamentally based on a HUGE lie, Regina was set up to take on her bitter rivalry with Emma all over again, and Emma and Hook kissed — fine — but will it really be that easy for them? Well, 'shippers, showrunners Kitsis and Horowitz sat down with TVGuide following the premiere and dished all the dirt we want to know about the future of our favorite OUAT romances. And I, for one, am pretty happy that Emma and Hook won't be ordering in Chinese food and watching Game of Thrones on Sunday nights like normal people.

Mirror, Mirror, on the wall — how will these 'ships fare in Season 4?

Okay, I don't want to sound like the worst person of all time — but I will for a second. Was anyone else as disappointed as I was to find out that Emma had actually rescued Maid Marian? I know, I know, Robin Hood's son deserves to know his mother, but still. I really, really wanted Regina to be happy and enjoy her transformation. So where do we go from there? Regina and Robin Hood 'shippers shouldn't hang up their bows and arrows just yet. Kistsis assured Natalie Abrams at TVGuide that Hood will "absolutely" struggle with what to do. And Horowitz elaborated that the journey of Regina and Robin Hood is something that the showrunners are still interested in exploring in Season 4.

What That Means: Regina and Robin Hood aren't over. There will obviously be some bad blood and a lot of issues to work through, but I'd put my money on seeing this couple back together by the end of Season 4. Well, unless Regina kills Emma for accidentally ruining her life and Robin Hood is horrified by her behavior. (Hopefully that won't happen.)

You didn't think their story was over already, did you? It took Hook and Emma a painfully long time to get together, but that doesn't mean that things are going to be easy now that they've finally kissed again. Kitsis hinted that there will hopefully be drama and crisis striking their relationship sometime soon — I mean, we don't need them to become any old boring couple already. And, again, Horowitz elaborated by saying that we only saw the tip of the iceberg in the Season 3 finale — there are a lot of roads this relationship can take and there are challenges and surprises on the road ahead.

What That Means: It won't be all goo-goo eyes and sweet kisses in the moonlight for Emma and Hook. And I'm actually okay with that — it's their job to save the world on a regular basis and they're pretty good at it. Domestic life just isn't for them, which is totally cool. There's also soon-to-be teenager Henry to deal with and we all know that's not going to be easy on their new relationship.

When we left Rumpel and Belle at the end of Season 3 they were exchanging their vows in a simple, intimate ceremony. And, fun fact, Belle still doesn't know that Rumpel lied about giving her The Dark One's dagger and using it to kill Zelena. Kitsis assured Abrams that Rumpel's love is still true and he's not tricking Belle into anything. But he did say that we're going to see a lot of soul-searching when it comes to Rumpel as a character and that he's absolutely up to something.

What That Means: Rumpel's got a lot of heavy stuff that he needs to come to terms with — you know, with the whole dying and coming back to life and losing his son in the process thing. He didn't really get a moment to acknowledge and accept those things before he had to tackle Zelena and ended up saying his "I do"s. There's a rocky road ahead for Rumpbelle — starting with him TELLING THE TRUTH and then with trying to remain open and vulnerable with his wife to overcome his challenging emotional issues.

More like this
Does 'Locke & Key’s Ending Mean There Could Be A Season 4?
By Sophia Moore
Everything To Know About The HBO Max & Discovery+ Streaming Service Merger
By Brad Witter
'Yellowjackets' Just Announced Who’s Playing Adult Van & It’s Perfect
By Gretchen Smail
'The Capture' Is Finally Back – & S2 Looks Tense AF
By Sophie McEvoy and El Hunt
Get Even More From Bustle — Sign Up For The Newsletter