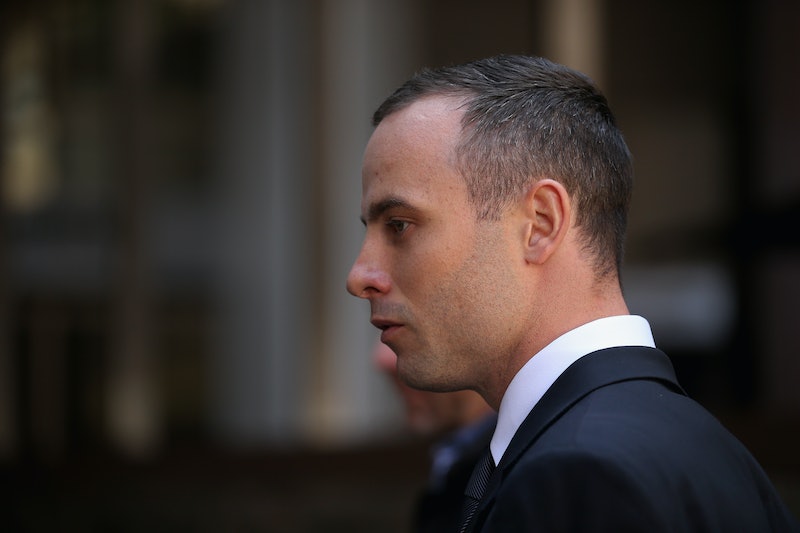 On Monday, Olympic athlete Oscar Pistorius arrived at a psychiatric hospital to begin his mental evaluation in South Africa's capital, Pretoria. The accused amputee will be going there every day for the next month, spending at least seven hours a day with experts who will determine his mental state when he shot and killed his girlfriend, Reeva Steenkamp, on February 14, 2013. A lot hinges on their evaluation: Pistorius could either be deemed "mentally incapacitated," and thereby potentially get a not-guilty verdict that would land him in a psych ward until further notice; or the experts could say that the athlete 's mental state wasn't compromised at all, in which case he could end up behind bars for life.

The accused athlete, currently free on bail, arrived at Weskoppies psychiatric hospital at 9.00 a.m. local time Monday morning. There, he'll be assessed as an outpatient for seven hours every weekday for thirty days, going home at the end of each day. According to Judge Thokozile Masipa, who ordered the psych evaluation, the experts will "inquire into whether the accused by reason of mental illness or mental defect was at the time of the commission of the offense criminally responsible for the offense as charged".

The judge's decision was sparked by Pistorius’ defense team, who earlier this month put forward testimony from a forensic psychiatrist, Dr. Merryll Vorster, suggesting that Pistorius suffers from generalized anxiety disorder. The team had intended for the testimony to show that Pistorius’ anxiety had contributed to his violent reaction, making him perceive threats when none exist— the effort backfired, however, when the prosecutors said this left them ”no other option but to ask for a study of Pistorius’ mental health."

When the trial resumes on June 30th, there are three things that could happen. The mental health experts could disagree with Vorster entirely, concluding instead that Pistorius' mental condition wasn't compromised by any type of mental illness at all — this could mean that the athlete would face a minimum of 25 years in prison for premeditated murder. On the opposite end of the spectrum, the experts could find that Pistorius was “mentally incapacitated” when he killed Steenkamp, which would see the trial collapsing completely (people suffering from mental illness can't be held guilty for such a crime, under African law) — but he might end up in a mental hospital until experts conclude he's no longer a danger.

Perhaps most likely, though, is the middle option: the team could conclude that his anxiety did play a part in Steenkamp's shooting, meaning that he'd be found to have diminished responsiblity. The trial would continue, but the most plausible verdict would be culpable homicide. As there aren't juries in South African trials, in the end, it'll all be up to Judge Masipa, helped by two assessors.