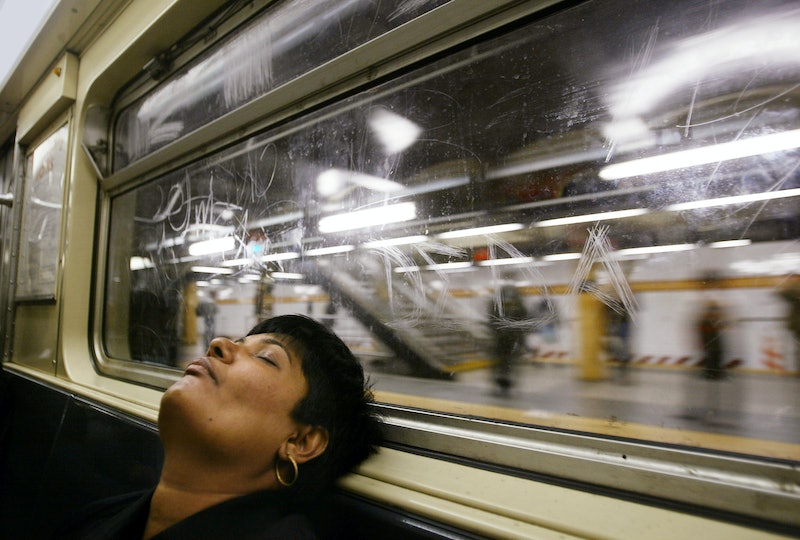 New York City is great for a lot of things. We have 24/7 bodegas, Lombardi’s pizza, drunk brunches, and of course, bragging rights. But we also have, thanks to our location and density of garbage, the type of summer humidity that’s enough to make you consider if all this greatness is really worth it.

Summers in New York City are challenging, but what’s even more horrifying on all our senses? The damn subway in that wretched, inhumane heat. It should be illegal for things to be that disgusting.

While we already gave you the ultimate guide of just exactly how to survive the obscene vileness that is the subway in the summer, we’ve yet to remind you of exactly, in intimate, nightmare-inducing detail, you’ll be up against if you're here within the coming weeks. (You know, because you probably forgot, as we all tend to do when it comes to things we, well, desperately want to forget.)

I love New York City probably more than I’ll love my first born child, but there’s a reason I avoid the subway in summer: it’s a hellfire of torture! It’s a place where dreams go to die! A place where you’re forced to second-guess every decision you’ve ever made in your whole life and where you wonder what you may have done wrong in a past life to be handed such a painful situation!

Still, lots of cities offer horrible summertime subway experiences. What makes New York City's the worst? If it’s so unbearable, you ask, what exactly about it is the most unbearable? Oh, my dear friends, let me tell you.

Don’t know what "swamp ass" is? Consider yourself lucky. Swamp ass is the inevitable, impossible to avoid, sweatiness of your crotch and ass that only a sweltering summer day can provide. The only thing worse than leaving your own swamp ass behind on a subway seat? Sitting in someone else’s that, thanks to your shorts or mini-skirt, you immediately feel against the back of your legs. It’s pretty much the equivalent to sitting in a stranger’s pee on a public toilet.

Whether it’s your moisturizer or your makeup, after even a few minutes on that stagnant subway platform, where no air breathes except for a train rushing by, your face will melt. Right. The hell. Off. It doesn’t matter how many times you try to dab it all lady-like, that shit isn’t staying put.

Sure, we already advised you to be as naked as possible, but there’s just one problem: OTHER HALF-NAKED HUMANS. Take a crowded subway, a bunch of people in tank tops and shorts, and you have a lot of rubbing and touching and — I’m cringing just at the thought — the sweaty, sticky skin of strangers on your sweaty, sticky skin.

Can we even call it air if it doesn’t circulate? Between the subpar hygiene practices of others (because you always shower every single day), and that one dude who thinks it’s A-OK to have a three-course dinner that smells like it was fished out of the East River in 2009, a subway car in the summer is a terrifying place for your nose. And if the AC breaks, you'd best find your religion.

Right before you come face-to-face with aforementioned treacherous subway car “air,” you have to deal with the platform situation. Although always dreadful (think about all those winters days you were bustling around the city, went into the subway, then proceeded to sweat upon immediate impact of the temperature difference), a 98-degree day in July makes those winter sweats look like a dream. Toss in the stench of piss on the tracks from both human and vermin, and... are you gagging yet?

Rats are relatively harmless, except for that whole killing millions of people by carrying the Black Death all around Europe, back in the day. Their murderous tendencies aside, rats are a persistent problem in New York City, especially in the summer.

For starters, the stink of the hot garbage makes their prowling nature even more so, and secondly, take a hot subway, some rotting food in the trash cans, and some sandals and… well, let’s just say I’ve had far too many foot-on-fur body contact with the little devils in the subway platform. Yes, twice is far too many.

BARE ARMPITS in your face

I know this one is deeply personal to those of us who hover around the five-foot mark in height, so I don't expect everyone to understand. But for us shorties, when the summer rolls around, we have the serious issue of being face-to-face to an unclothed armpit. This means being subjected to one of two things: sweat and stink, or nubby deodorant chunks that have given up on working, but are still hanging on to the pit for dear life. It's a wretched situation either way, and depending on how packed the subway car is, inescapable.

Takeaway? Nothing can put a damper in your step quite like the New York City subway in the summer. But, hey, you only have yourself to blame. You chose to live here, didn't you? Just remember that if you can make it on this subway system, you can make it anywhere.

More like this
Anguilla Is The Under-The-Radar Caribbean Destination You Need To Visit
By Rachel Lapidos
Wimbledon Alters All-White Kit Rule Amid Candid Period Discussions
By Catharina Cheung and Rachel Mantock
Here’s Your Daily Horoscope For December 2, 2022
By Mecca Woods
Here's How To Support Jewish People Amid Rising Antisemitism
By Hannah Orenstein
Get Even More From Bustle — Sign Up For The Newsletter