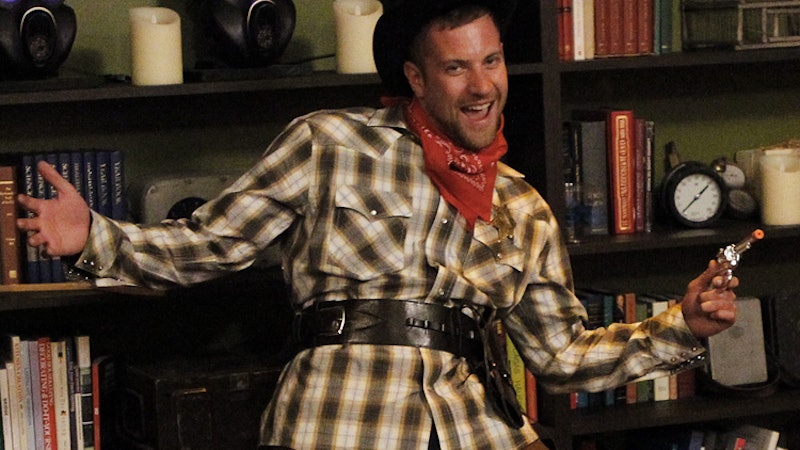 As we learned last night, alcohol and The Bachelorette don't mix very well. Andi Dorfman was originally willing to overlook Craig's drunken shenanigans as a one-time thing ("we've all been there; we've all had too much to drink in our day"), but it doesn't appear that this was Craig's first time over-indulging. In fact, if we'd all managed to connect the dots beforehand, we could've seen this coming . A stray fact here or there didn't lead us to the conclusion that Craig was a booze bomb waiting to explode, but since hindsight is 20/20, let's take a look at all the signs we missed.

That way, in next year's Bachelorette bracket building, we'll be able to see the signs faster and avoid putting the Craigs of the future into a prime slot. (I hope no one actually did that though, considering he made my weirdest night one limo stunts list and therefore should have been automatically cast aside, as all stunt-pullers deserve to be.) In any case, here are the 6 things we missed that would have shown Craig's drunken demise to be inevitable.

To introduce The Bachelorette contestants to the public, ABC released some fun facts about each man. Craig's fun fact? He apparently once puked on a girl during a date. Not only is that fact not very fun, it proved to be an ominous sign of what was to come for party-hard Craig.

SIGN #2: HIS INTRO VIDEO SHOWCASED HOW MUCH HE LIKES TO HAVE FUN

The Bachelorette cut the extended intros out of the first episode to save time, which is unfortunate because had we seen Craig beforehand, we would have seen just how much fun he likes to have. We got to see a day in the life of Craig the tax accountant who spent some time playing golf in his office and talking about how he likes to relax. "I'm definitely adding up numbers but I'm thinking in my head about fun things," he reveals and then repeats, "I love to have fun." I don't blame him because doing math for a living definitely warrants an alcoholic beverage here and there, but maybe he should have scaled back a bit for his national TV debut.

SIGN #3: HE JUMPED OUT OF THE LIMO WITH CHAMPAGNE

Craig decided the best way to greet Andi was to hop out of the limo on night one, pop the cork on some champagne, and spray it all over the driveway.

SIGN #4: WHEN ASKED IF HE WAS A PARTY BOY HE ANSWERED YES

"We'll do a real toast inside," he told (warned?) Andi after giving her a hug.

SIGN #6: HE COULDN'T WAIT TO GET THE TOAST OVER WITH SO HE COULD DRINK

"Can we have a cheers so I can have a drink of this?” Craig asked during the evening portion of the group date. As our Bachelorette live-blogger Henning Fog put it, “Problem drinker is going to be a problem.”

Alone, each of these instances wouldn't indicate that Craig was going to devolve into a drunken mess so quickly, but when you add it all together, I'm not at all surprised that he ended up swimming in the pool with all his clothes still on.