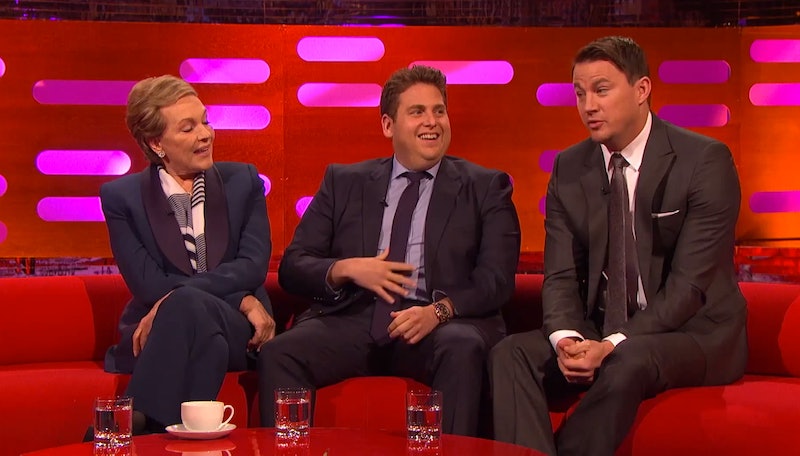 Ever wonder what it takes for Mary Poppins to make the star of Magic Mike look bashful? Apparently, all you need is a prolonged discussion of onscreen nudity, Dame Julie Andrews being completely into it, Jonah Hill and Andrews kinda hitting on each other, and Channing Tatum actively wondering how he got to a place where he's being publicly questioned about his knowledge of Andrews' breasts. This is why we have talk shows, folks.

Andrews, Hill, and Tatum — gonna throw that out there as the center trio for 23 Jump Street or literally any buddy movie ever — made appearances on The Graham Norton Show, and Norton brought up Andrews' nudity in 1981's S.O.B.. This caused Hill and Andrews to go on a nostalgia kick surrounding her late, great husband, director/writer/producer Blake Edwards, and then immediately transitioned into a back-and-forth about onscreen nudity that culminated in a discussion of... the effects of cold temperatures on the naked body.

It's not like we needed more proof that Andrews is an A+ human being — she's Mary Freaking Poppins, Maria VonTrapp, she curses like a sailor, and she's provided us with the mental image of Dame Julie Andrews sitting down with her daughter to watch Magic Mike. That's world champion class if I ever heard it.

Pharrell also showed up later and added himself to Andrews' growing harem.

It's also imperative at this moment to remember that she's been great on shows like this for literally half a century.

And she's always been raunchily charming.