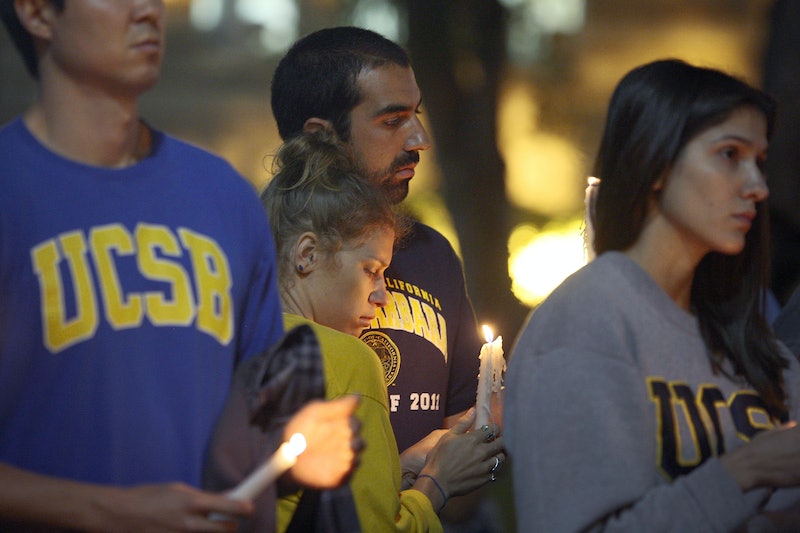 When serial killings hit the headlines, it is the Why — not the What, Who, When and Where — that we want answered. And when it comes to just how much a story piques our interest, there seems to be some sort of secret equation at work involving youth, privilege, unfathomable violence, mental health issues, and an abhorrence of the world. At least, those are all things that drew media and others to 22-year-old Elliot Rodger, who murdered six students near to the University of California-Santa Barbara campus, Isla Vista, last Friday.

Watching this coverage is especially disturbing to me, considering my own personal history: My ex had Asperger's, and he was also mildly sexist. But he definitely wasn’t sexist because he had Asperger's. And that's a crucial distinction.

It’s natural to want an answer as to why Rodger committed such a heinous act. But the coverage I've seen over the last few days is worse than speculative — it seeks to pin the blame either on the girls that spurned Rodger, or on his alleged condition of Asperger's. The Daily Mail, for one, featured "Had Aspergers" as a bullet point in its main report about the shootings, despite the fact Rodger was never even officially diagnosed, and that Asperger's no longer exists as a diagnosis in the DSM.

Right on cue, one dogged so-called male activism site called Return of Kings even ran an article called No One Would Have Died if PUAHate Killer Elliot Rodger Learned Game, with the article falsely stating, "Diagnosed with Asperger’s, he clearly exhibited narcissistic and sociopathic traits that no doubt prevented him from empathizing with others." (PUAHate, by the way, is an online forum that bills itself as “the forefront of the anti-pickup-artist movement.”)

Dare to go through the Twitter hashtag on Rodger and you’ll see hundreds of variations on "the dude had Asperger's" — a mawkish non-sequitur that quickly closes down any further interrogation of the reasons for his actions, and the notion of personal agency.

It's a damning indictment of a widely misrepresented condition, and it doesn't help us understand Rodger's actions any better. It merely stigmatizes those on the autistic spectrum.

Watching this coverage is especially disturbing to me, considering my own personal history: My ex had Asperger's, and he was also mildly sexist. But he definitely wasn’t sexist because he had Asperger's. And that's a crucial distinction.

My ex was sexist because he’d been brought up in a culture that prized male dominance and the sanctity of female flesh, and which upheld a double standard around male and female sexual behavior — an ideology far more at home on the PUA and 'manosphere' sites than on Asperger's message boards.

Used to offending and misconstruing people — and being misconstrued — my ex was also desperate to understand why I considered him to be sexist. (Perhaps one of the most endearing moments in our relationship was when he asked me to explain his male privilege to him.) One of the least was when he told me he’d never be able to confess we’d had sex on the first date to his friends — because, you understand, the kind of woman that did that was not the kind of woman you married.

Explaining feminism to him was tricky. He wanted to please me, but not at the sake of his core values, which were inculcated in a monied, conservative, Catholic suburb in Southern California. He’d spent his college years in a frat, where he learned to imitate roles varying from the Fool to the Stud.

Forging intimate connections may have been difficult for him, but pulling women for frivolous sexual encounters certainly wasn’t. He was a brilliant lover, with technique honed from real-life practice and the study of hundreds of sex guides. (Many people on the spectrum are often drawn to codes and rules precisely because they struggle so much with decoding socially accepted behaviors otherwise.) But he struggled terribly with emotional intimacy. By the end of our relationship, it became rapidly apparent to me that I was probably the first woman he’d actually loved.

Along with a very painful dalliance with an engagement ring for which I was measured for but never materialized (my ex decided it was a poor financial investment), conversation and physical intimacy were exchanged for nights spent at his computer. When he professed that he really did love me, I asked if we could go to couples therapy. He was diagnosed with Asperger's soon after — a diagnosis which, by the way, no longer officially exists.

The Atlantic explains why it was eliminated as from the DSM last year:

The American Psychiatric Association expunged Asperger’s in large part because studies revealed little consistency in how the diagnosis was being applied...Whether a child was labeled as having Asperger’s or diagnosed instead with autism, or some other developmental disorder, depended mostly on the clinician’s somewhat arbitrary interpretation. After much debate, the APA decided to simplify the diagnostic process, or perhaps more accurately, to complicate it in a democratic way.

Asperger's or not, at his core, my ex was an earnest, hugely creative, and intellectually capable young man who was also deeply insecure, having spent his whole life blaming himself for his inability to do or say the right thing. His personality helped him to generate ingenious solutions to the practical problems in our relationship and, in time, he began to open up emotionally too. Contrary to popular misconception, people on the spectrum feel deeply — they just have trouble expressing it.

My ex also challenged my preconceptions about staged romance, and forced me to admit that I too could be guilty of sending mixed messages. (You know, the standard saying I was okay when I wasn't, or pretending I didn't care if he wanted to play video games rather than come to bed.) He taught me a lot about love. But ultimately, the closer we grew, the more apparent it became that we weren’t going to be able to reconcile our values around sexuality or gender. It was those differences that split us up, not his Asperger's.

While it’s certainly feasible that an Aspergian tendency towards isolation and difficulties with communicating with the opposite sex might help incubate misogyny and resentment towards women, it would only take a violent grip if the misogyny was resident to begin with, and only in very rare situations.

There’s every chance a young guy with Asperger's could adopt a flawless code of feminism as much as one of belligerent misogynistic vengeance — if only more young men were exposed to a definition of feminism as a system of equality that wants better for women and men, rather than one that seeks the utter subjugation of men.

We may not be able to fathom the reason for Elliot Rodger’s serial killing, but one thing we can certainly do is educate ourselves about the autism spectrum, and call out those around us who perpetuate the myths and misunderstandings about the condition. Assuming every young guy on the spectrum is misogynistic is about as prejudiced as saying every young guy with mental health problems will murder.

If I'd listened to the prejudice, I wouldn't have had a relationship with such a fascinating, inspiring, and unique man. I'd also have accepted his sexism as part of his diagnosis of Asperger's. And that would have been to nobody's benefit.

More like this
Read Dan Levy's Heartbreaking Message After The Club Q Shooting
By Stephanie Topacio Long
Adam Driver & Joanne Tucker’s Relationship Timeline Starts With Cheese
By Jordyn Tilchen
Kendall Jenner & Devin Booker’s Relationship Timeline From Start To Finish
By Jordyn Tilchen and Jake Viswanath
My Lip Color Lasted Through A 3-Course Meal, Thanks To This Viral Lip Stain
By Isabella Sarlija
Get Even More From Bustle — Sign Up For The Newsletter