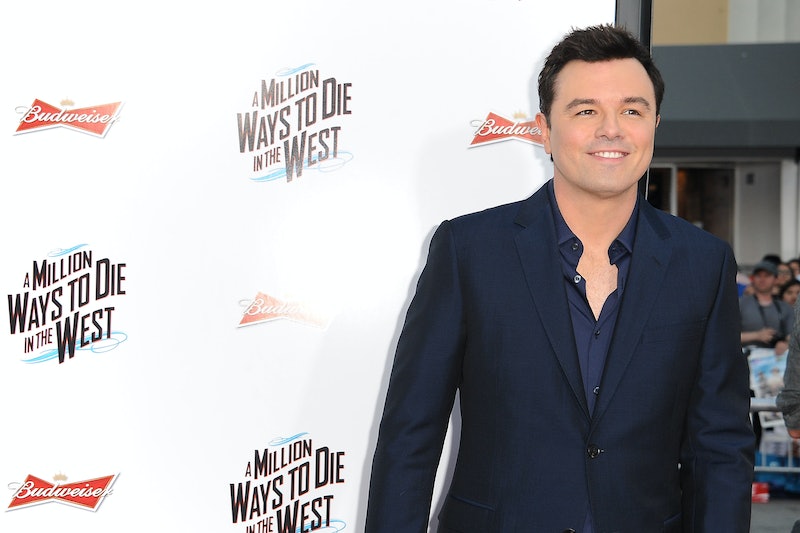 Seth MacFarlane was on Jimmy Fallon on Monday night, telling the same jokes that he always tells — MacFarlane repeated his "Bad Review Headlines" shtick for A Million Ways to Die in the West that he trotted out when he was promoting his last full-length film, Ted. "These are headlines that the papers can't use when they tell us our movie was shit," MacFarlane joked with Fallon. It would be funny, MAYBE, if he hadn't used the same exact joke when promoting Ted, and during the Oscars, too.

Samplings of MacFarlane's imagined headlines from various papers include: "A Million Ways to Die at the Box Office," "A Million Ways Sophomoric Fart Fest," "Only One Black Person in MacFarlane Western." It's not a bad strategy to poke fun at yourself to diffuse possible, real bad reviews in the future, but who knows if MacFarlane will so jovially accept ACTUAL panning of A Million Ways to Die in the West? There's a chance that his "fake" headlines might not be so far off from the real thing, and there's no way to diffuse that tension.

It's an honest effort, I guess, from MacFarlane, to show that he doesn't take himself too seriously, but I wish he had another joke in his wheelhouse. His brand of comedy is crude and does hinge crucially on a lot of fart jokes, so it's no surprise that some of these faux-headlines are fart-filled. Is A Million Ways centered on that same humor? Just saying, if MacFarlane wanted to preempt and prevent bad reviews of his movie (it seems like he thinks those papers are just picking on him!), he could have at least written a fresh joke.

And, as always, he pokes fun at his Oscar blunders in the segment—"A Million Ways Almost Makes Up for Oscars Tragedy." Which, I admit, shows growth; but man, that Oscars performance was dismal, and no light-hearted self-deprecation can really make up for it. Try a new promotional vehicle next time, Seth, because writing fake headlines of bad reviews doesn't seem like it's going to prevent the bad reviews from actually coming in.