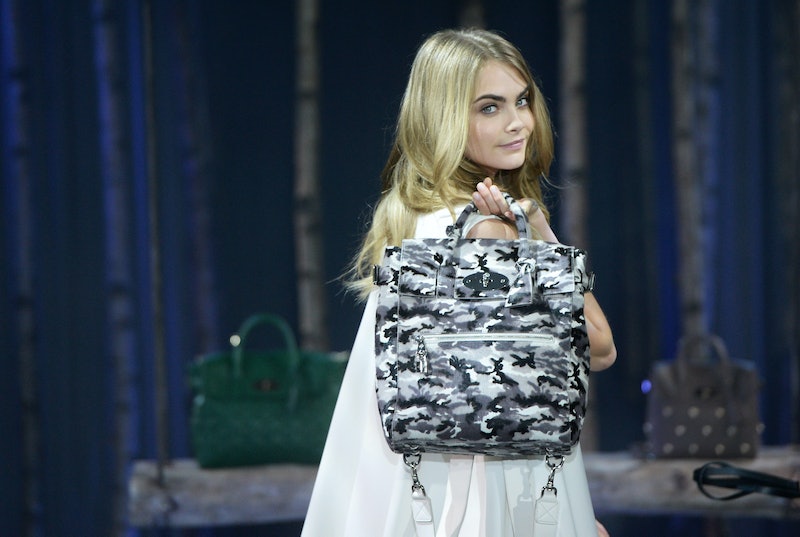 Remember when I told you that Mulberry would be lowering prices to try and save the business? I have some bad news for aspiring Alexa Chungs/Cara Delevingnes out there. The info on the soon-to-be-released lower-priced Tessie line is finally available — and it's still crazy expensive.

On sale later this week, Mulberry's Tessie line "will act as a sincere bid to boost the company's growth." But with prices ranging from $860 to $1,190 for four handbag styles, the brand still isn't competing with the entry-point for designer bags "which usually ring in at around $400." As I wrote for Bustle:

Pricing has long been one of the reasons for Mulberry’s financial troubles. [CEO Brian] Gullion drove up the prices for the popular handbags in hopes that this would attract more luxury customers, but the increases priced out existing customers and allegedly lead to Emma Hill’s departure from the company.

After a few "It" bag hits, Mulberry increased prices to compete with Big League luxury retailers. But "It" fashion never stays in the spotlight for long. Fashionista recently reported on the rise and fall of so-called "It" items, quoting Lucky Editor-in-Chief Eva Chen:

“I think most It items, they burn bright and they burn hot and fast and then kind of fade to a simmer,” says Chen. “I think what makes an It item is that it’s instantly recognizable and people immediately have a sense of time and feeling about it and what it stands for.” While this may be the desired effect at first, it also makes for quite the Catch-22. “That’s one of the downsides of an It item too, that people know exactly when it’s from—that it’s instantly identifiable can have an impact on longevity.”

The Tessie styles are rather timeless and feature a small satchel, a medium satchel, and a large tote all available in Oak, Black, Poppy Red, and Oxblood. While the Tessie prices are a significant reduction for Mulberry, they still don't allow the brand to effectively compete with "the likes of Marc by Marc Jacobs, Michael Kors and Coach, all of whom offer accessible and functional designer handbags for less than £300." Guess I can kiss my dreams of finally snagging a Mulberry bag goodbye.

More like this
Here Are All 703 Outfits Rachel Wore On Friends
By Kat George
This Scandi Beauty Brand Is Basically Hygge In A Bottle
By Justine Knight
4 Chic Outfits To Wear With Loafers, According To A Fashion Editor
By Bella Gerard
Givenchy’s Shark Lock Boots Are Having A Major Moment Again
By Allie Fasanella
Get Even More From Bustle — Sign Up For The Newsletter