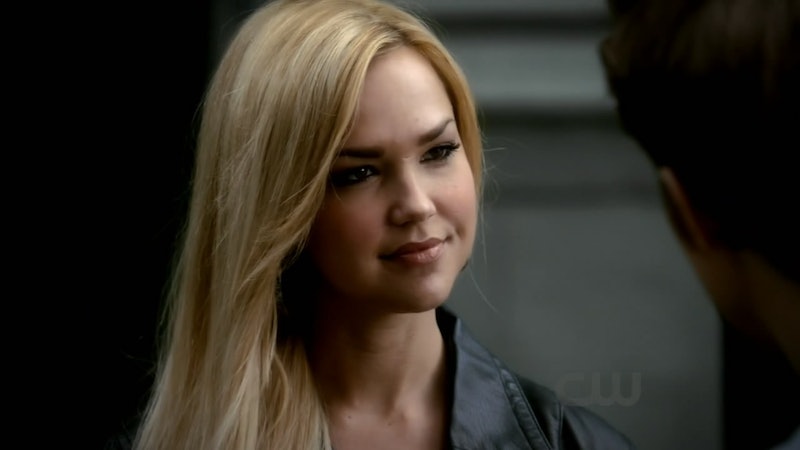 Does anyone ever get killed off of this show for real? Obviously that wasn't a real question — no one who dies on The Vampire Diaries stays dead or even ends up leaving the show. But, as a TVD fan, I've been scouring the Internet for TVD Season 6 spoilers since Julie Plec killed off Damon Salvatore in the Season 5 finale for hints that he's coming back to life. Or at least that he's kind of "alive" somewhere out there in oblivion. But Plec's going to break our heart's again it seems with these Lexi spoilers for The Vampire Diaries' Season 6.

We were all surprised when Lexi made yet another return to the series in the Season 5 finale. But we shouldn't have been because she's got a real knack for turning up exactly when Stefan needs her — like when he's dead and wandering around The Other Side contemplating the meaning of life. And, much like every time we've seen her (both living and dead) in the past, Stefan clung to her and tried to drag her back to the mortal world with him. In truth, Stefan does need her, but politely declined and instead found her peace and, as far as we could tell, "moved on." So where does that leave TVD and Lexi in Season 6?

Following the finale, Plec dropped handful of spoilers about our favorite and not-so-favorite characters. But what we're really interested in here, is whether or not Lexi — who managed to become a fan-favorite similar to Alaric — would return in some way, shape, or form in Season 6. Guess what, people: she will return, but not in the way Alaric made his triumphant return in the finale.

Plec told THR reporter Phillana Ng that we'd seen the last of Grams, Silas, and Lexi during the finale and that "in Lexi's case, she seemed to find peace. A true goodbye." Alright, that's all good, I'm cool with that — Lex and Stefan both got closure and she could finally accept that she'd died. But here's where things get interesting and we have to start wondering about the implications this spoiler might have on our favorite brothers. Plec said that Lexi "is great in our flashbacks and part of Stefan's life, all the way from 1864 on, so we might see Arielle [Kebbel] again as Lexi in the past. As for the present, she sacrificed herself for her friend."

I guess I can't complain about that — I like Lexi as much as the next person and it's duly noted that she helped Stefan through some pretty dark days. But this particular type of return doesn't mean anything good for the two Salvatore brothers, or anyone in Mystic Falls, if we start to contemplate why Stefan might be having Lexi-flashbacks.

He's going into Ripper mode or pod-Stefan mode. How do I know this? Because any time Stefan suffers a massive emotional break or falls down the rabbit hole of dismembering bodies for kicks, Lexi has to step in. And in the past, she has — whether it be as a apparition or in his memory. If we're getting Lexi-flashbacks in Season 6, it means Stefan is in a darker place than we thought.

Spoilers already hinted that Stefan will take Damon's death extremely hard. And, of course, we wondered whether or not he'd end up being a Ripper or drive himself crazy trying to figure out a way to bring his brother back. If anything, Plec's assertion that Lexi will return is confirmation that Stefan will need serious help when TVD returns in the fall.

I know I wasn't the only one that was hoping that Lexi would turn up wherever Damon and Bonnie are and they'd all work together to get home. Idealistic? Yes. But I'm just not ready to let go of the idea that Damon will return and he and Elena will live happily ever after. Sue me. Unfortunately, that won't be the case — Plec referred to Lexi's decision to stay behind as a sacrifice for her friend and that's what worries me. I know, Damon and Bonnie didn't have a choice — they had to stay behind, but essentially, they seemed at peace with their circumstance as well.

Yes, they have unfinished business, but Damon went to Elena for closure and Bonnie and Jeremy had a type of closure in their own way. So, TVD fans should be worried by Plec's spoilers regarding Lexi, because I have a feeling that Damon and Bonnie went the same way. And if they did, they're not coming back.