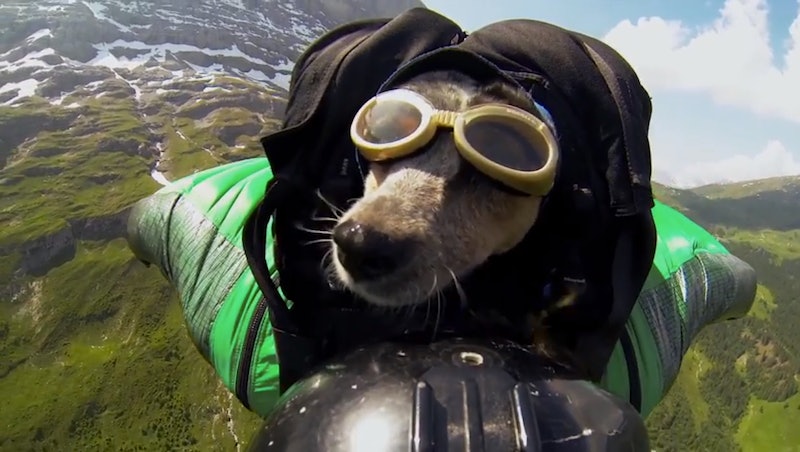 There's a new knockout in town, and no, I'm not talking about the latest Emma Watson-esque ingenue. Meet Whisper, the world's first base jumping dog. He's breaking records and taking names.

That's right, weird pet accessories and glow-in-the-dark pigs are so yesterday in the crazy animal world, where new phenomenal shenanigans are popping up almost every day. Dean Potter, an avid rock-climber and base jumper, recently jumped off the Eiger mountain in Switzerland in a wingsuit and brought his dog, Whistle, along for the ride. The entire jump is recorded on Potter's GoPro and by his camera crew. The film includes everything from Whisper being transported to the jumping point to the astonishing jump itself. The video is a shortened preview for Potter's longer flick When Dogs Fly which premiered over the weekend at the Mountain Film Festival.

Although the video has garnered much enthusiasm and praise, many commenters and animal activists are questioning whether the stunt was actually OK, labeling the act as "animal cruelty." One worried commenter even wrote, "How are you so sure that the dog enjoys it? I'm afraid he must not even understand what [is] happening." In an interview with National Geographic , Potter defends his actions by stressing that he only jumps off the safest cliffs when flying with Whisper and uses the safest and best gear for his pup. When asked why he brings Whisper on jumps, Potter said, "All Whisper wants is to be with her pack family. When we go on adventures, she goes on adventures. She’s just a loyal pup with a very adventuresome papa."In the end, base jumping may be a notably exciting pasttime for us humans, but dogs aren't able to directly voice their emotions and might not even know what's going on when strapped to a flying person, which is why their safety and well-being should always be your top priority if you're an audacious swashbuckler like Potter. However, Whisper doesn't seem to be in any immediate threat, and Potter takes all of the necessary precautions before each jump to ensure that his little daredevil is safe, so I don't think there's any harm in letting Whisper have some fun.

More like this
21 Absolutely Adorable Christmas Gifts For Dogs
By Carolyn Steber
20 Christmas Movie Quotes That'll Get You In The Holiday Spirit
By Alexis Morillo
What Does “The Rizz” Mean On TikTok? The Viral Slang Term, Explained
By Alexis Morillo
The 10 Memes That Defined 2022
By Alexis Morillo
Get Even More From Bustle — Sign Up For The Newsletter