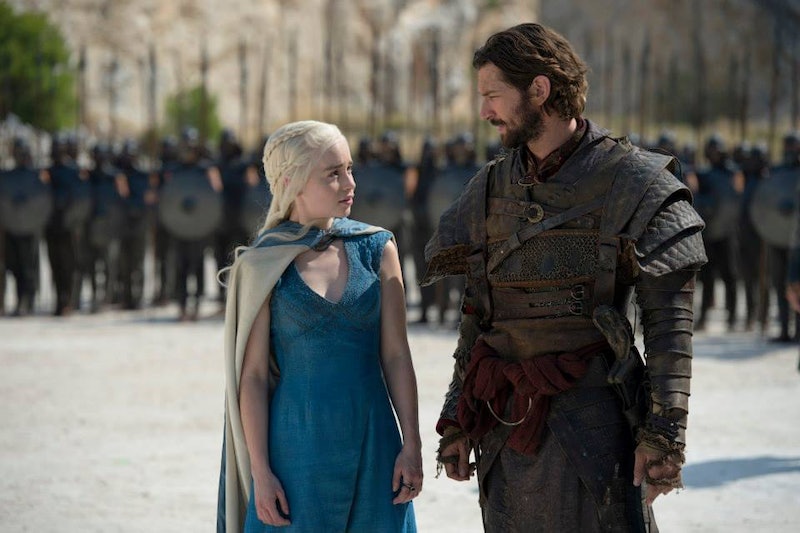 Watching the ninth episode of Game of Thrones ' fourth season, "Mockingbird," I felt an unbearable pang of devastation. No, none of my favorite characters were murdered or maimed or kidnapped or tortured or raped. Rather, the sense of tragedy derived from a lack of action that I desperately wanted — needed! — to see: Daenerys Targaryen and Daario Naharis having sex.This entire season has been disappointing on the sex front, portraying little to no of the mutual, adult, pleasurable, not-rape sex that undoubtedly occurs in the Game of Thrones universe. Yes, the GoT world is largely characterized by unspeakable horror, sexual and otherwise, and I actually respect most of the directors' choices in showing us this, no matter how difficult these scenes can be to watch. On Sunday's season finale, however, I hoped for some sexual redemption. But once the television content rating popped up and there was no warning for upcoming nudity, I knew I wouldn't get what I'd hoped for. In the episode, sex was exactly how we've seen it all season: flat and far less emotionally ambiguous than the directors' would have us believe. Cersei runs to Jaime and professes her love and loyalty; they have sex. (Fortunately, their love-making takes place far away from the corpse of her (/their) son this time. But the shot is quick and not nearly as probing as the botched "non-rape" rape scene.) Later in the episode, Tyrion finds Shae sprawled on his father's bed, muttering sweet nothings in her sleep, and he murders her. Here were two missed opportunities to portray — in all of its complexity and vulgarity, staying true to GoT — the sexual agency of adults (especially women) who seek sex in unspeakably difficult conditions. Both Shae and Cersei's sexual agency, however problematic, deserved to be portrayed as graphically as are the casual instances of rape and assault littered throughout the show.

Let's take the episode "Mockingbird," which encapsulates a lot of what's been wrong with this season's portrayal of sex. Yes, both Daario and Dany are wildly attractive and share unspeakable chemistry. To be honest, I'd been anticipating their sex scene since last season, when the chiseled hunk of man joined Dany's ever-growing entourage on her World Domination Tour. Throughout this season, I endured complicated plot twists and gratuitous torture and the adventures of the youngest Stark, Bran, who I find insufferable, and Reek, the least watchable character since Charlie Sheen on Two and a Half Men. I deserved to see them have awesome, passionate sex. When the time finally came on "Mockingbird," Dany tells Daario: "Do what you do best. Take off your clothes," I squealed with delight. Then I shrieked with despair when the camera instantly cut to a different scene, far, far away.

But here's why I really felt cheated when the Daario-Dany love-making session was not shown on camera, but rather implied: the GoT team so rarely portrays this brand of non-abusive sex. Not only can this be difficult to watch and impossible to enjoy, but its repetitiveness raises questions about the narrow methods by which the show runners choose to portray this world's sexual culture.

Of course, Rosenberg understands the stylistic device of portraying sexual abuse and dysfunction to paint a clear picture of Westoros, scary and violent as it is. But to a point. She writes:

Depicting sexual assault repeatedly is one way to demonstrate that a society is deformed by its monstrous sexual culture and gender norms. But “Game of Thrones” could also get to that same point by examining the ways in which healthier relationships fail to thrive or are killed off by institutions or social pressure.

In her demand for "more sex scenes," she makes a crucial distinction:

I am not calling for more scenes where significant male characters lounge around in brothels, checking out the naked merchandise, or hang out in hot tubs with prostitutes who are there to jiggle appealingly and flatter their clients’ egos. I definitely do not want to watch more rape scenes on a show that has made its point about the sexual climates of both Westeros and Essos.

Rosenberg finds this troubling, as do I, particularly in light of the Jaime-Cersei rape scene, which director Alex Graves claimed to be "consensual at the end."

I don't ask for a lot, Game of Thrones. But have mercy on your viewers — and your characters. You don't need to compromise the show's tone or message or plot. We deserved to see Daenerys Targaryen and Daario Naharis have steamy, truly consensual sex.

I hope better for next season.

More like this
Twitter’s Reaction To HBO’s ‘Game Of Thrones’ Jon Snow Spinoff Idea Is Chaotic
By Stephanie Topacio Long
13 Ideas To Add To Your Sex Bucket List
By Kristin Magaldi
35 Sexy Texts To Send Your Partner
By Griffin Wynne and Carolyn Steber
What Are Swingers? Everything You Need To Know
By Lexi Inks
Get Even More From Bustle — Sign Up For The Newsletter