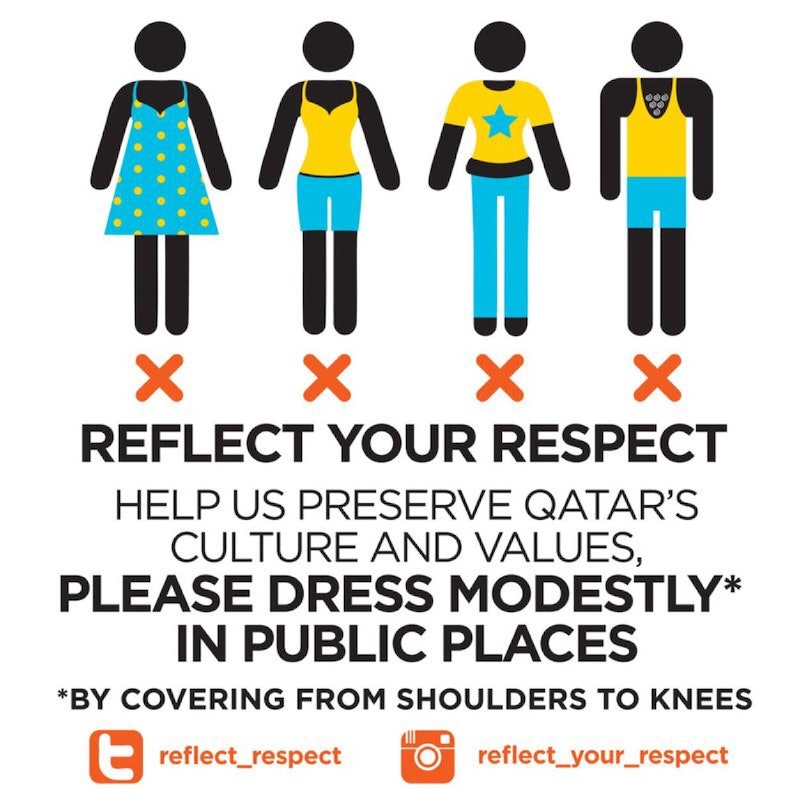 While Gap and all the other activewear companies are really hoping Americans never take their leggings off, Qatar is trying to push for tourists visiting their country to do the opposite. According to Racked, Qatar has launched a campaign called "Reflect Your Respect," which urges visitors to adopt a more modest attire during their stay.

In addition to not wearing leggings as pants, the campaign asks visitors, both female and male, to leave their revealing clothing at home. The campaign's ethical and social code of conduct reads as follows:

"It is expected that you wear decent clothes and women should avoid wearing any garments that are too tight, too short or translucent such as mini-skirts or sleeveless dresses. Both men and women should also avoid walking around in their swimming suits away from the beaches or swimming pools."

Sure, the above may sound a lot like your middle school's dress code, but I think it's obviously important that tourists respect Qatar's wishes in preserving their culture and values. However, the other requests are more on the extreme side. In the same pamphlet which lists clothing suggestions, visitors will find warnings about kissing in public or reciting songs or phrases that are considered indecent or obscene. Basically, if you do either, you will be sent to jail.

As expected, the campaign is receiving mixed reviews, but it seems that Qatar is steadfast in enforcing these rules on their visitors.

More like this
Phoebe Dynevor Serves ‘Bridgerton’ Underboob In Stunning Floral Gown
By El Hunt
Is Miley Cyrus Wearing Liam Hemsworth's Suit In Her "Flowers" Music Video?
By Allie Fasanella
Watch Jacinda Arden’s Devastatingly Honest Resignation Speech
By Sam Ramsden
J.Lo's Micro-French Manicure Has A Fun, Sparkly Twist
By Olivia Rose Rushing
Get Even More From Bustle — Sign Up For The Newsletter
From hair trends to relationship advice, our daily newsletter has everything you need to sound like a person who’s on TikTok, even if you aren’t.