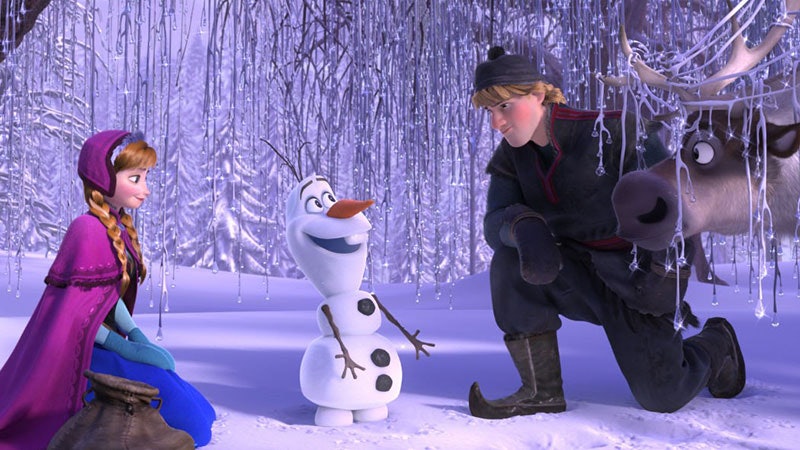 With seemingly everyone on the planet having seen Frozen by now, it's easy to spot those who are bona fide obsessed: they're the ones creating "Let It Go" parodies, freaking out over Once Upon a Time , and discovering that Netflix does not, in fact, have the movie available for streaming. And then there are the people who take loving the film to a whole new level, such as Sydney, a teenage girl who's been having text conversations with her mom solely using Frozen screenshots and posting the hilarious results on her Tumblr.

As the blog posts show, Sydney, while re-watching Frozen for what was presumably the 1000th time, began texting her mom answers to questions only using images from the Disney film. At first, her mother seemed confused at the screenshot responses, and then resistant. Eventually, however, she gave in to the fun, and showed off her own knowledge of the movie with a perfectly timed "do you want to build a snowman?"

Although it might seem that there'd only be so many moments a Frozen screenshot could fit into a conversation, it turns out that the possibilities are endless. As Sydney demonstrates, Frozen works when you're being nagged ("you mean well, but leave me be"), when you're asked what you want to eat ("sandwiches!"), even when you're being questioned about just how many images from the movie you actually have ("I get the feeling you don't know"). If there's a situation that requires a response, Frozen, and Sydney, have you covered.

If Sydney's preferred method of communication has inspired you to try it out for yourself, she's helpfully posted all of her Frozen screencaps to one page. So the next time you're unsure of what to say, don't feel like typing, or just really want to piss off your Frozen-hating friends, you now have several dozen screenshots at your disposal.

Check out a few of Sydney's best screenshots below, and go to her blog to see the rest:

And her mom's reluctant but perfect contribution: