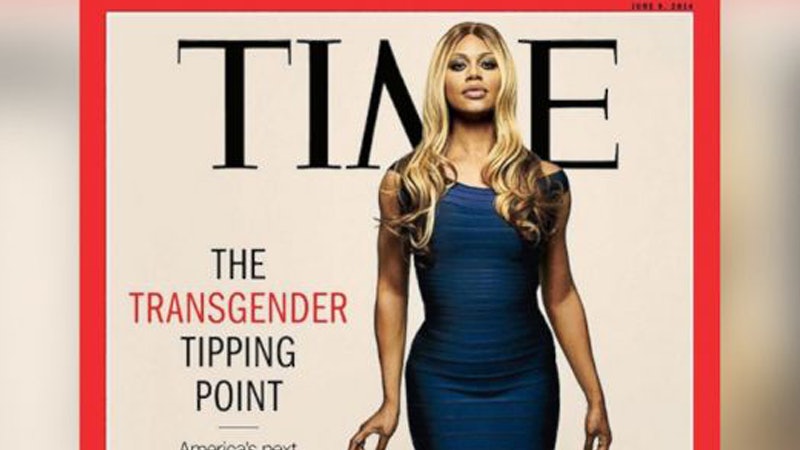 The famous transgender advocate Laverne Cox, an actress known for her role as Sophia Burset in the hit series Orange is the New Black, officially became the first transgender individual to grace the iconic cover of TIME magazine this week. I've written elsewhere about the peculiar absence of Laverne Cox from the TIME 100 list of influential individuals and my disdain that she was left out, especially considering the demand expressed by TIME's readers that she be included. Nevertheless, at last, it seems as if the magazine is giving Cox the acknowledgement that her work deserves.

In an interview TIME conducted with her upon the announcement, Cox recounts important events in her life that shaped her personal journey as a transgender woman and as an activist. While she acknowledges that no two transgender narratives are the same and that we all must follow different paths to get to where we want to be, I was struck as I read through the interview by the similarities between her narrative and my own.

I, too, had a sense from a young age that I would somehow become something other than a boy, and that my body was simply defective. I constantly felt dissonance between who I was told that I should be and who I actually felt myself to be. I lacked the ability to articulate this dissonance, however, and was told repeatedly that my inklings were either flat out wrong or just a phase that I would grow out of. At school I was bullied, and unable to put into words what I felt, I could not defend myself from the quotidian assault and harassment. I became withdrawn, depressed, and had absolutely no self-esteem. Eventually, little by little, I tried to negotiate my identity, defying the male designation imposed on me in whatever ways I could, but I still felt inescapably shackled to it.

After years of suffering in silence, I began to understand some of what I was feeling when I stumbled across an internet message board full of individuals articulating experiences similar to my own. For the first time, I began to challenge the ideas that I had been conditioned to believe all my life about women like me — Popular depictions of transgender individuals, scarce as they were, constantly reminded me that what I was feeling was shameful. I was taught that transgender women were simply “trannies” and freaks, pitiable individuals doomed to appear on Jerry Springer. I was taught that transgender women are deceptive and disgusting for abandoning their designated gender at birth in movies like Ace Ventura. I was taught that this world had no place for me.

Laverne Cox, and what she represents to me as a trans woman, is important, because she is living proof that those lessons of the past, the ones that kept me and countless other trans women like me in the shadows of our own shame, were false. She is proof that there is a place for us, and that place is not just insular, isolated message boards or secret communities hidden from the gaze of the majority. She is proof that we can be visible as the people we want to be, the people that we feel we truly are, and we can be successful in doing so. Laverne Cox’s emergence doesn't just represent a tipping point, it represents a paradigm shift away from the old understanding of what it means to be transgender. She undermines the narrative that we are victims of our circumstances or doomed to lives of exclusion and ridicule. In her activism, she has been tireless in challenging harmful assumptions about transgender people, giving voice to our community on a scale we haven't experienced before.

When Cece McDonald was charged with manslaughter and placed in a men's prison for defending herself from violent, transphobic thugs, Cox personally reached out to Cece and brought her plight into mainstream focus. She has spoken out about the harmful affects of daily microaggressions that transgender people experience, connecting them to the structural inequalities and widespread violence that transgender women (and especially trans women of color) face. She has done this even in instances in which others have tried to derail the conversation by focusing on her genital configuration.

Cox's activism would remain just as important even if she had not graced the cover of TIME. The fact that she is on the cover, however, sends a message. That message is that the rights of transgender people, and indeed transgender people themselves, are important. It sends the message that our struggle is legitimate, and the gains that we make should be recognized. It is validation not only of Laverne Cox's work, but the work of the entire transgender community. It is a visible, tangible representation of our existence.

It is validation not only of Laverne Cox's work, but the work of the entire transgender community. It is a visible, tangible representation of our existence.

Growing up as a queer trans woman in southern Appalachia, I never had that validation. There was no one like me that I could look to as a "possibility model", and there was no external validation of my experience. Laverne Cox is not only evidence that things are changing, but that they already have. Trans women younger than me have her to look up to, and I couldn't be happier or more optimistic about it. Her work to promote transgender visibility has empowered them and made it so that they don't have to feel alone and powerless, like I did. In carving out a space for herself in our society, she has carved out a space for us all, and the magnitude of that achievement could not be contained within the pages of any magazine.

We still have a long way to go, and as a community we have a lot of work to do as we strive for equality. It is often difficult, thankless work that makes us vulnerable to reactionary hatred from those who refuse to respect our humanity. However, as we do that work, we all now have a possibility model to look up to for inspiration. And we can be sure that even as we fight, she is fighting alongside us.

Laverne Cox may be the first transgender person to appear on the cover of TIME, but her efforts ensure that she won't be the last. In a way, her being on the cover places our entire community in the spotlight, and while I believe there are many battles to be fought and many "tipping points" ahead on the road to transgender equality, in this moment, Laverne Cox has given us all an opportunity to shine.