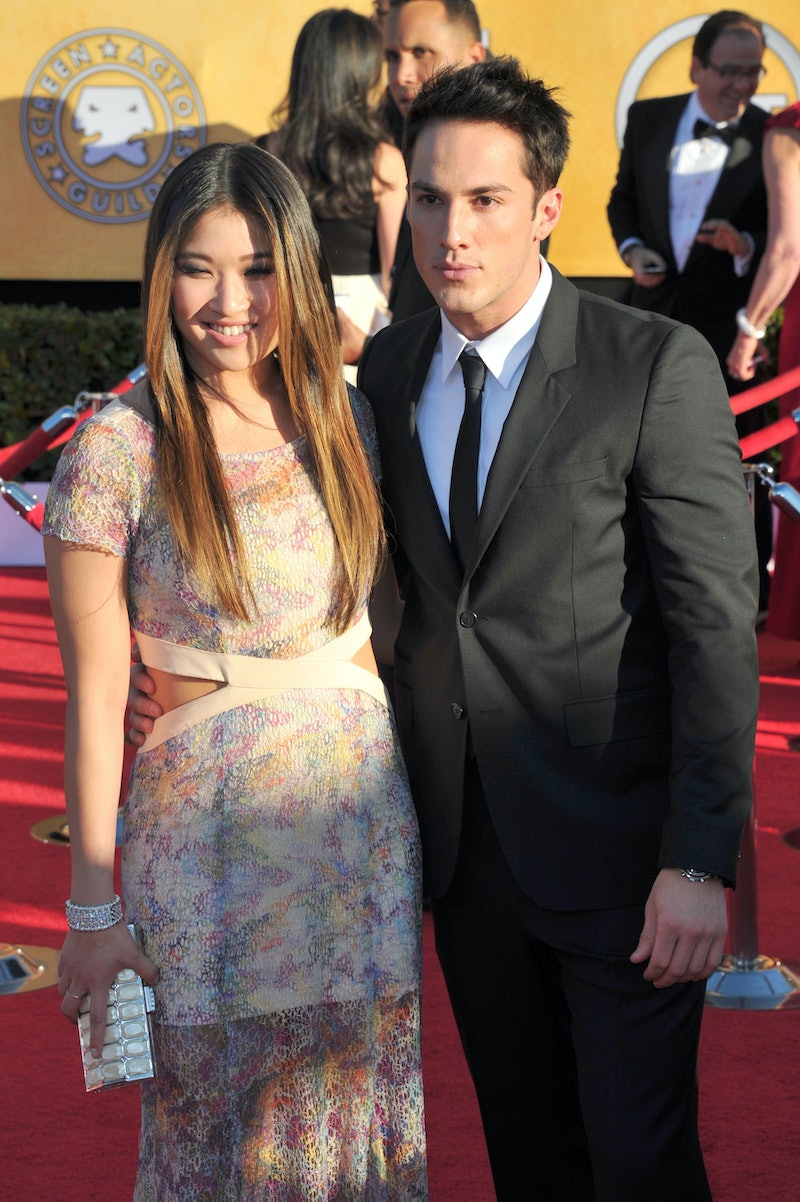 A third Glee couple of 2014 has bit the dust — could this be a final season curse? Glee star Jenna Ushkowitz and The Vampire Diaries' Michael Trevino have split after three years of dating, Us Weekly reports. And, well, I can't help but see a pattern here: A few months ago, Chord Overstreet split from girlfriend Halston Sage and then there was Naya Rivera's explosive break-up from fiancé Big Sean. It's been a rough six months for Glee stars and their relationships. So what the heck is going wrong?

According to one of the site's sources, Ushkowitz and Trevino have been separated for some time now. But the 28-year-old actress only confirmed the split on May 19 at the Beverly Hills premiere of Glee creator Ryan Murphy's HBO film, The Normal Heart. A photographer (of course) asked the Glee star whether or not she and her TVD boyfriend were still an item during her red carpet appearance, to which Ushkowitz responded with,"No, we're not together anymore." Simple and succinct, I like it — well, I don't like it. The pair were an adorable primetime couple, after all.

So why did they split? Did Trevino's TVD death have anything to do with it (don't worry, he came back to life — duh) or are all Glee relationships cursed now that it's sixth and final season is upon us? It seems that as Rivera, Ushkowitz, and Overstreet's characters "move on" on Glee, they also move on from their relationships.

Rivera's Santana Lopez was on the upswing, breaking into the theater world and paving a career for herself, when her explosive separation from Big Sean went public. The star was then followed, for months, by rumors of getting fired and fighting with costar Lea Michele. Rough. As for Overstreet, his character, Sam Evans, moved to NYC and started up a modeling career on the heels of his break-up from Neighbors actress Halston Sage. There were later rumors that Sage had started dating her costar Zac Efron — ouch. And now, here we are with Ushkowitz and Trevino, whose characters have both essentially "moved on" on their respective series — even though Tina Cohen-Chang is still and will forever be the worst of all time.

So, as Glee's actors shed the characters they've lived in for five seasons, are they shedding their real-life relationships? Will Chris Colfer and Darren Criss be the next stars to have their relationships crumble alongside Glee's storylines? If they are, then at least Tina Cohen-Chang has some helpful advice to help them make it through:

God, she is just the worst.

More like this
Legacies Showrunner Said There Is Still Hope For More Vampire Diaries
By Gretchen Smail
Paapa Essiedu Likes To Keep His Relationship Pretty Private
By Maxine Harrison
John Mulaney & Olivia Munn's Relationship Timeline Features The Comedian's First Father's Day
By Jordyn Tilchen
Why Simone Ashley Had To Study Snails For Intimacy Training, Pre-‘Bridgerton’
By Grace Wehniainen
Get Even More From Bustle — Sign Up For The Newsletter