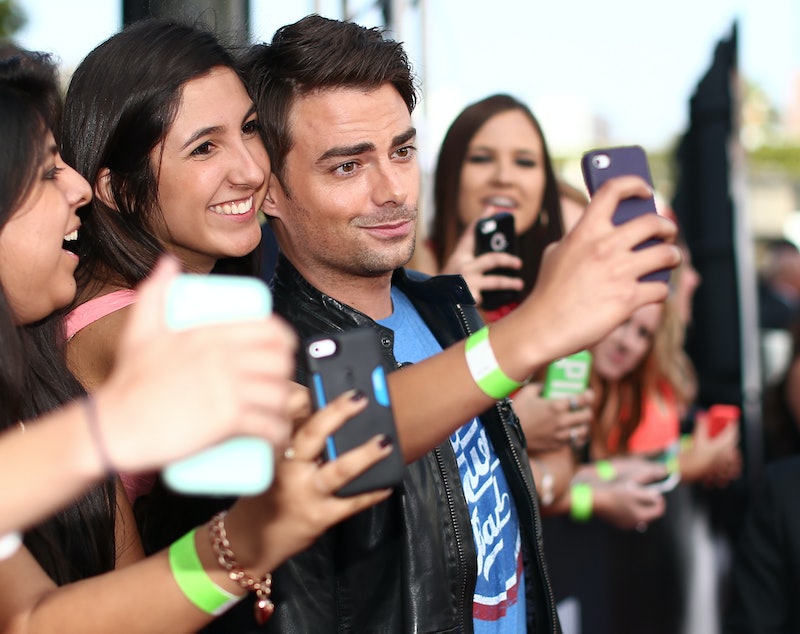 He is so over Mean Girls. Seriously, guys. Jonathan Bennett didn't remember Mean Girls ' 10th Anniversary because he was too busy filming something, according to a recent interview the actor did on The Wrap's Drinking with the Stars. And while we're sad that he's not as attached to Aaron Samuels (and his hair style) as we are to the 2004 film, Bennett actually has been busy lately becoming the new Ryan Seacrest. Yup — Bennett will host MTV's Copycat , a singing competition series that premieres on June 2. So, yeah, he doesn't have time to take your hair style suggestions anymore.

So where has Aaron Samuels — I mean, Jonathan Bennett — been for the past 10 years? And now that he's making his triumphant return to our radar (on a weekly TV series, how great), what do we need to know about him? Well, for starters, he's actually had a lot more acting roles than you think — I mean, none as iconic as Aaron Samuels, but he actually has been busy in the past 10 years. And he also has a perfectly crafted selfie face to rule them all. So, sorry, everyone — this isn't a post about all things Aaron Samuels, but it is everything you need to know about the real-life guy behind that sexy pushed-back hair. But first, here's Bennett admitting that he forgot all about Mean Girls' anniversary:

And it's on MTV, daily, with episodes at 3 and 3:30p.m. and Bennett doesn't want you to forget it. It's in his Twitter bio and he shamlessly plugged it in a BuzzFeed Q&A on May 29. Seriously — don't forget.

Still wondering where he's been all of this time? Back in October 2013, Bennett was spotted on Flywheel L.A.'s website, where he was listed as an instructor. Yes, Aaron Samuels could teach you spin class — imagine how handy that would've come in when Regina was trying to lose those three pounds.

He Wants To Be On DWTS

I wasn't sure if I'd watch DWTS unless Maks and Meryl came back for an encore season — but I would absolutely watch Aaron Samuels compete.

His Favorite Mean Girls Memory Is Kind Of Gross

Bennett said during his Drinking with the Stars interview that his favorite memory from shooting the film was when Lindsay Lohan puked on him. Seriously, that's the best you could come up with? The actor went into minor detail about the moment — saying that LiLo had either chicken soup or cereal in her mouth — and that was pretty much it.

Me too, Bennett. Me too.

He Loves "Let It Go" As Much As You

Bennett told BuzzFeed that the music he's currently listening to is "Zac Brown Band and Frozen." Can he sing? Will he play Hans on Broadway? God, I hope so.

More like this
At 28, Lesley Manville Was Acting, Picketing, & Singing Kate Bush Songs
By Olivia-Anne Cleary
Reese Witherspoon Gave Fans Hope For 'Legally Blonde 3' After This Surprising Movie Inspired Her
By Jake Viswanath
Everything To Know About The Musical 'Joker' Sequel – & Lady Gaga’s Role
By El Hunt and Sam Ramsden
22 Movies On Netflix That Are Perfect For The Whole Family
By Bustle Editors
Get Even More From Bustle — Sign Up For The Newsletter