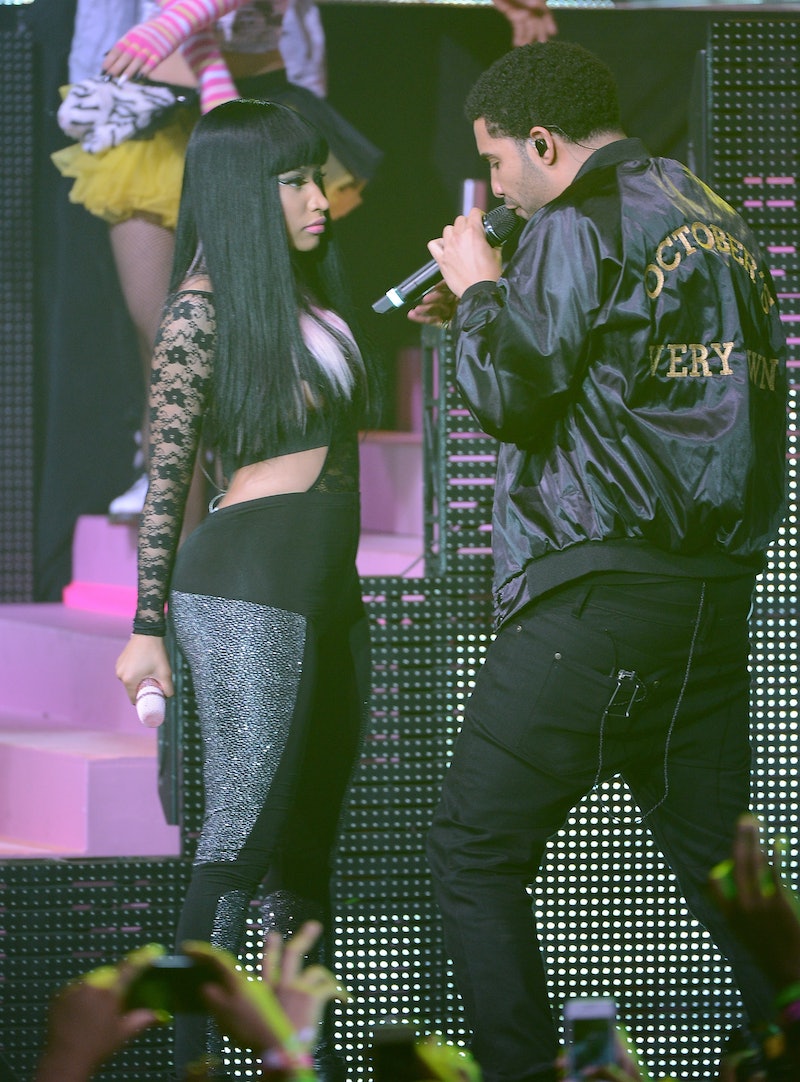 Just when everyone thought they knew who who Drake was dating, Nicki Minaj has gone and confused the poor souls who attempted to make sense of the 1,000-piece puzzle that is Drake's love life. In an interview with Vice magazine's i-D section, Nicki Minaj said she wants to marry Drake. Specifically, she said she plans to "run away with Drake and get married." Cute, Nicki, real cute, but please, stop while you're ahead. For anyone co-signing this doomed union, a marriage between Nicki Minaj and Drake would never work and here's why:1. Drake's heart belongs to Aaliyah. He already has a tattoo of the late songstress' face on his back. What woman would stand for that? Certainly not Nicki. All attempts at giving Drake a back massage are guaranteed to end in disaster.2. Oops, let's not forget that Nicki's rumored boyfriend/husband/guy who goes everywhere with her has a couple tattoos of her face. So yeah... this tattoo thing works both ways. 3. Rihanna. Nicki recently called Rihanna the best fondler ever, but if Nicki dates Rih's on-again off-again guy, that status will quickly change for the worse. Besides, neither woman seems like the type to share a man. That love triangle could easily produce the most epic cat fight in all of history.4. They couldn't even stay married on Twitter. If that doesn't spell disaster, what does?5. Drake has previously admitted to having a crush on Nicki, who responded by saying that Drake's like her little brother. That brother-sister hookup thing may have worked for Cher and Josh but this isn't Clueless. Thinking this union should happen is.

6. They work together and their boss Lil Wayne can't afford to let potential relationship drama affect the business. Then again, some pretty awesome music could come from Nicki and Drake's romance woes. Their friendship created enough drama for him to mention Nicki on Nothing Was the Same .

7. They both have huge egos, which will inevitably produce an incessant desire to one-up each other. The focus will shift from being a great spouse to a competitive marriage whereby they each rush to drop records and out-tour one another. They will overload the public with their music and presence which will cause everyone to pray and hope for them to disappear. By the time they finish touring and recording music, they'll return home 50 years later, strangers to one another and mere shadows of their former selves.8. Any portmanteau of their names sounds AWFUL. Dricki or Nake are no match for AubRih. That, ladies and gentlemen, is the nail in the coffin.There you have it. If Nicki and Drake decide against moving forward with the marriage that should never be after reading this expertly compiled list of evidence, they'll both thank me later.