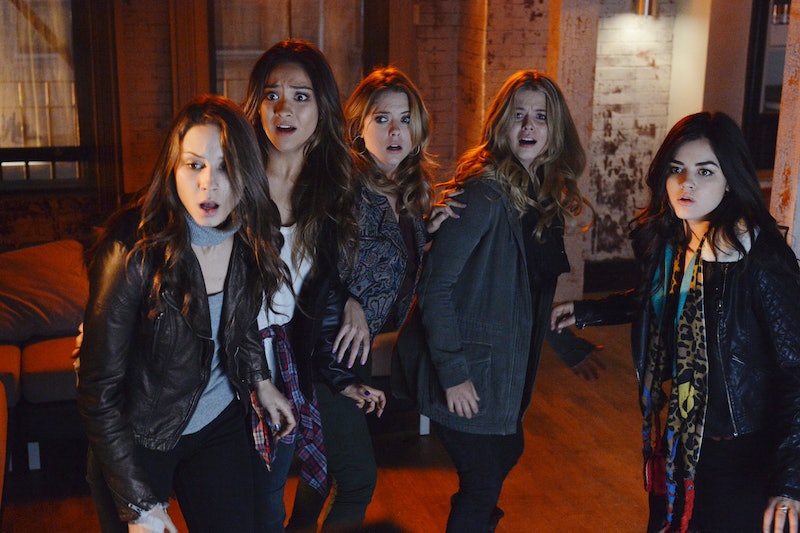 Just when I thought I had scooped up every single little clue about Pretty Little Liars, the internet had to go and blow my mind. I've been surfing the message boards and fan sites for Pretty Little Liars Season 5 spoilers (for readers like you, sure, but also to satisfy my own deep obsessions with this show) and came across what might be the most insane theory ever. And it all has to do with Rosewood's creepy mental institution, Radley Sanitarium.

I'm a pretty huge Pretty Little Liars fan (and that's an understatement) so the fact that I didn't know about this earlier has me freaking out. I originally found this fact on one of my absolute favorite PLL Tumblrs, "Pretty Little Secret Hints." (Seriously, there is not an insane PLL theory that you won't find on this site... Thank God for the internet.) We've sifted through countless mind-blowing PLL theories over four seasons — including why Aria is totally Big A — but this one fact completely threw me for a loop. Ready for a fact that will shock you to the core?

Radley Sanitarium is an anagram for "Mary A. DiLaurentis."

Wait, wait... What? You can get "DiLaurentis" from Radley Sanitarium? That can't be a coincidence, right?

Now here's the tricky part: What, exactly, could it mean? I have an idea that, if correct, might answer a lot of the show's big questions.

Spoilers for the Pretty Little Liars TV and book series ahead.

Radley has been a source of mystery since Mona was locked up there in Season 2, and the place itself seems to hold a ton of secrets. This season we found out that Alison DiLaurentis' mother, Jessica DiLaurentis, is on the board of trustees at Radley, only furthering our questioning into the sanitarium's suspicious past. Mrs. DiLaurentis and Spencer's father were both particularly shady about admitting that Mrs. DiLaurentis was involved with Radley, which led many fans to assume that they were covering something up about the institution. What if the big secret was that Mrs. DiLaurentis' third child was living in Radley? And her name is — obviously — Mary DiLaurentis.

There are a lot of clues that point to this being the case. In the Pretty Little Liars book series, Alison had an identical twin named Courtney who was locked up in a mental institution for impersonating her sister. Though the showrunners have stated that they are not pursuing the "twin theory," they could pursue the story line of Alison's second sibling. In fact, it would make a whole lot of sense for them to do so.

This theory might sound farfetched, but in actuality, it might answer more questions that it asks. Remember how, in Season 4, we saw Mrs. DiLaurentis purchasing clothes for a teenage girl? We assumed those clothes were for Alison, until it was revealed that Mrs. DiLaurentis thought she was dead all along. Mrs. D passed those clothes off to someone in the woods — perhaps it was Alison's secret sibling all this time.

In the Season 4 finale we saw Mrs. DiLaurentis on the phone with someone. Though we didn't know who the person was, we got the sense that the phone call was urgent. Immediately after the phone call Mrs. DiLaurentis told Alison that she didn't want her going out, without providing any concrete reason. When Alison didn't obey her mom's wishes, Alison ended up getting attacked.

What if the person who Alison's mother was speaking to on the phone was someone at a mental institution — possibly Radley, or possibly another institution that Mrs. DiLaurentis had her transferred to — who was informing Mrs. DiLaurentis that Mary had escaped? If Mary was violent and had a vendetta against Alison, that would certainly give Mrs. DiLaurentis a reason to make Alison stay inside for the night. It would also explain why Mrs. DiLaurentis would bury her own daughter... she was doing it to protect her other child.

We know that Alison has had a stalker for quite some time, and that most of her "suspects" (Mona, Jenna, the liars) passed her test. What if, this entire time, Alison's stalker — and the "Ultimate A" — was her own sister? A sister that had such a dark past that she was kept a secret from Alison herself.

Alison having a secret sibling would pull together some major loose ends. Take Wren, for example — we know that he has some strange connection to Radley and to Alison (remember that creepy drawing of "Red Coat" that he did during his session with Mona?). What if Wren helped out Alison's sister when she was in Radley? What if he was in love with her? It would certainly explain his odd behavior.

Toby's mom is also another plot point that hasn't been resolved. The woman on the roof with Toby's mother could have been the third DiLaurentis child — like Alison, she could also have blond hair. It would be yet one more reason why Mr. Hastings didn't want Toby to pursue the case — he wanted to protect Mrs. DiLaurentis' (and possibly his own?) child. And what if the woman who Mona met in Radley — the one she thought was Alison, but believes now to be Cece Drake — wasn't either of those girls? What if the real "Red Coat" was Alison's sister this entire time?

The anagram of Radley Sanitarium could be something that is revealed later on the show, or it could be a wink at loyal (and, okay, obsessive) fans who the writers know will pick up every little clue they give us. Whatever the truth is, this reveal might have put us one step closer to A's true identity.

For more PLL, check out Bustle's Pretty Little Liars podcast, "Taking This One To The Grave."