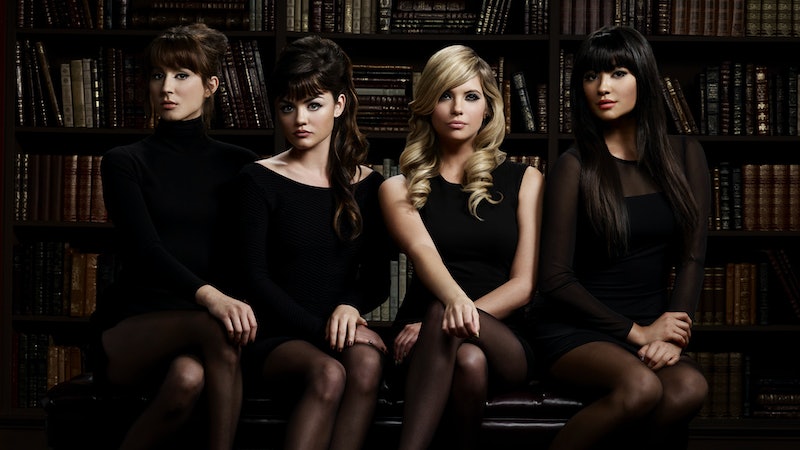 I wish I could tell you guys that I was playing it cool about Season 5 of Pretty Little Liars starting on June 10, but that would be a lie. I'm more obsessed with this show than I really should admit to, which is why I spend the months when the show goes on hiatus desperately searching for spoilers. (Yes, I am that kind of a fan.) Thankfully, the showrunners have graced us with some juicy new facts regarding the fifth season of the ABC Family drama, and the new info is giving us insight into how the show will be revamped come Season 5.

For those of you who need a refresher on what's been happening with the little liars, last season ended with a bang — literally. Ezra Fitz, previously of "Ezria, was shot by a masked figure (possibly A?!) while trying to protect Aria and her friends. Alison DiLaurentis, the girl whose death kicked off this entire mystery, was revealed to be really, truly, definitely alive — and is still being tormented by A, just as Spencer, Aria, Emily and Hanna are. We found out that it was Mrs. DiLaurentis who buried her daughter alive — covering up her "murder" for someone else — and, at the end of the finale, was seen meeting her very own grave.

We have a lot of questions that we need answered in Season 5, and PLL's producers are here to tell us just enough to feed our curiosity. Here are some of the clues the PLL team gave in their interview with The Hollywood Reporter :

According to executive producer Oliver Goldstick, having Alison return to Rosewood — very much alive — is one of the ways that the show will keep its story fresh. Alison's been a major presence on PLL since the pilot, but this is the first time that we'll see her interact with modern-day Rosewood. If I were the little liars, I'd be wary — Alison may not be A, but she's still the Regina George of this show. Loyal as the liars are to Alison, they should know from uncovering her secrets that she isn't to be trusted.

Alison's social standing will be in question

Queen Bee? Not for long. According to Goldstick, "[The liars] friendships will be challenged and [there will be] a tectonic shift in their relationship because Alison wants to assume that [leadership] position and they're saying 'We don't really need that anymore. We're a democracy.' Their government has changed in her absence." How will Alison react when her power is stripped upon her arrival to Rosewood?

Ezra isn't off the hook just yet

Ezra will survive the gunshot, but just because he risked his life for the liars doesn't mean that the girls will forget about his past. According to executive producer I. Marlene King, "He still needs to be redeemed... He took a bullet for the girls but he still has some work to do. That's definitely part of [his arc]."

Possibly in the second episode of the fifth season — at least, according to King: "It's a big twist — we find out maybe a week from Tuesday." Wait, so does that mean we'll find out who A is in the second episode? Considering that the show has already made us wait four seasons for Big A's ultimate reveal, it's doubtful. Did King just tell us that the person in the mask wasn't the real A? If so, why would he (or she!) try to hurt the girls? Oh, what a tangled web PLL weaves...

This season will have all of the feels.

According to King, this season will be "the most emotionally complex so far." Given that last season had the return of a person previously thought of as dead, a character getting sent to rehab, and another relationship imploding due to a major betrayal, that's saying a lot for how Season 5 is shaping up. I don't know if I can handle any more feelings, you guys... but I'm excited.

Tune in to ABC Family's Pretty Little Liars at 8PM on June 10.

More like this
At 14, Jurnee Smollett Was Taking Meetings With Missy Elliot & Lauryn Hill
By Chloe Foussianes
Shonda Rhimes' Net Worth Makes Her One Of The Wealthiest People In TV History
By Hugh McIntyre
'The Rings Of Power' Episode 7 Will Feature An “Unlikely Pairing Of Characters”
By Grace Wehniainen
'Firefly Lane' Season 2 Will Be The Show's Last — But There's A Twist
By K.W. Colyard and Grace Wehniainen
Get Even More From Bustle — Sign Up For The Newsletter