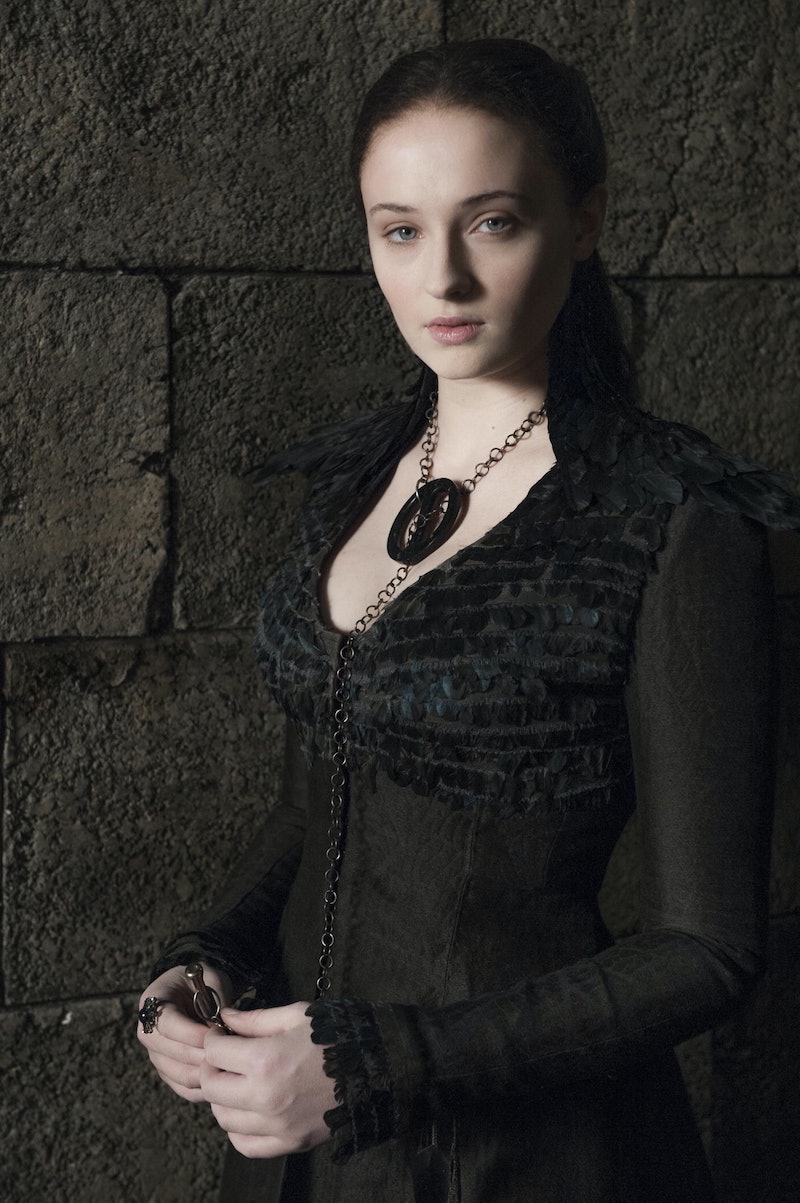 Sansa's done more than learn from her captor/torturer/style icon Cersei: It looks like the student has surpassed the master. Because remember when Oberyn Martell told Tyrion how Cersei had tried and failed at emotional manipulation with him? Well, Sansa just categorically won all the emotional manipulation awards ever on Sunday's episode — and she made sure to dress accordingly.

After almost three full seasons of being a powerless hostage, Sansa's finally talking back. We first saw a glimpse of it a few weeks ago when she tearfully told Aunt Lysa that Littlefinger hadn't tried anything with her (and he hadn't... yet) — she used her admittedly tragic past to her advantage to convince Aunt Lysa that she had no designs on him.

And this week, she takes it a step further, conflating truth and fiction so very seamlessly that she's able to successfully convince a whole panel of suspicious Eyrie elders of Littlefinger's innocence. It's a masterful move (both by Sansa herself and actor, Sophie Turner), and her calculated, through-crocodile-tears-look at Littlefinger shows us that she's playing with the big leagues now.

Her subsequent scene with him ("I know what you want") adds feathers (no pun intended) to her cap, and her dress clinches it. Sansa's always been a survivor, but this is a dress that lets us know she's playing the infamously life-or-death game of thrones for keeps.

Sure, it's unfortunate that the ever-creepy Littlefinger is the ally she chooses, but at least we know she's making very calculated risks — because it's not blind loyalty or even fear that drove her to save him, but an aptitude for self-preservation and manipulation that we only wish her mom and dad had. And it's this Maleficent-worthy dress that seals the deal — or rather, puts the nails in the coffins of her enemies.

It's the perfect marriage between character development and costuming. Major props to the Game of Thrones costume department for creating the dress of the season (it even beats Dany's post-Daario dress, and Margaery's roses-and-thorns wedding dress, IMHO). It's a character-defining dress that has rightfully taken over Twitter, Tumblr, and just about every GoT recap, ever — and I'm sure we'll be seeing it on scores of future cosplayers to come.

More like this
Emilia Clarke Shares More Details About The New 'Game Of Thrones' Series
By Maxine Harrison
Twitter’s Reaction To HBO’s ‘Game Of Thrones’ Jon Snow Spinoff Idea Is Chaotic
By Stephanie Topacio Long
'The Summer I Turned Pretty' Book Ending Is An Emotional Rollercoaster
By K.W. Colyard
42 Black Owned Fashion & Beauty Brands To Support Today & Always
By Mekita Rivas, Shea Simmons, Kui Mwai and Dominique Norman
Get Even More From Bustle — Sign Up For The Newsletter