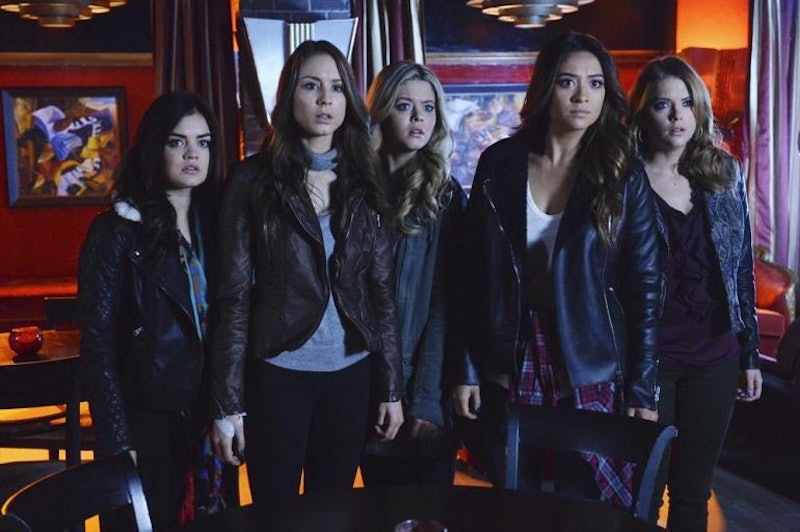 Well, my summer is about to get really great. Pretty Little Liars is coming back June 10 for Season 5 which means that we're in store for another season of twists, turns, and teen drama. Season 4 was packed with red herrings, intense Ezria moments, and even a throwback to 1940s film noir. Season 5 promises to top that. The Season 5 promos tease Alison's official return to Rosewood as a formerly-dead person, Ezra's big A reveal, and even a potential team-up between Alison and the original A herself, Mona. Whatever happens, one thing is for sure: things are about to get crAzy in Rosewood.

One way to predict just what craziness the show might bestow upon us come Season 5? Checking out the titles for the upcoming episodes. So far nine Pretty Little Liars episode titles for Season 5 have been released, and though they aren't giving away any major reveals, they do give us some insight into what we can expect from the fifth season of the ABC Family drama. Just look at some of the other times that PLL's titles have hinted at major events that have happened on the show. "For Whom The Bell Tolls," the Season 1 finale, had Spencer confronting Ian at the bell tower. The Season 3 episode "I'm Your Puppet" had one of the liars acting as Mona's right-hand lady. The Season 4 episode "Hot For Teacher" revealed that Ezra had a brief affair with Alison prior to his one with Aria. The episode titles are small hints, sure... but they always hint at something.

So what are these titles trying to say? Much like an A text, these titles are awfully cryptic. Here's what the episode titles could mean for Season 5.

We saw the liars in New York at the end of Season 4's finale, and this episode title hints that we'll find them in dire circumstances in the Big Apple once again. I. Marlene King already told fans that we'll see the liars in New York in the premiere, but there's a chance that the liars are metaphorically escaping from New York as well. Could what happened in the Season 4 finale take a mental toll on the girls, just as A's torture did in previous seasons?

PLL is notorious for its use of very scary carnivals. "Whirly" could reference a tilt-a-whirl at another creepy fair. That's not the only Pretty Little Liars connection that this episode title has, though — Whirlygirl is also the name of a 2006 movie starring PLL's own Julian Morris (AKA Wren!). In that movie, "Whirly Girl" is the name of an exotic dancer. Think that the little liars will go sleuthing in a strip joint?

Last time I checked, earthquakes weren't all that common in Pennsylvania... and neither are surfing competitions. Taking the title literally might be out of the question with this one, but the title does hint that something major will happen at the end of the previous episode that will throw the liars for a loop.

This title may remind fans of the Season 3 Halloween episode's title "This Is A Dark Ride," in which the girls were trapped on the Halloween train with A. (Also, with Adam Lambert, because reasons.) A could find a new, mobile way to torture the girls in this episode.

"Miss me?" is practically Alison's catchphrase, so this episode definitely seems Ali-centric. The title leaves us to wonder why we would be missing Ali in the first place — hasn't she returned to Rosewood for good? "Miss Me x 100" will be PLL 's 100th episode, hence the very specific number in the title.

Ali's been on the run from A since she faked her death, and A isn't about to let her go just yet. Could this episode title indicate that Ali is going to runaway once again? I'd feel worse for Ali if she wasn't a horrible person half the time.

Remember Eddie Lamb? He was the hospital orderly at Radley who fed Spencer clues about Mona, Ali, and Toby's mom. Lamb clashed with Wren over something, but we never found out exactly what that was. There's definitely more to Lamb's story than we found out last season, and this episode should fill in some of those gaps. Did Lamb keep a secret for someone?

As if PLL wasn't creepy enough, right? This episode title could mean a ton of things, but it's certainly setting us up for one unsettling episode.

This episode title sounds like someone is finally facing up to the crimes that they have committed. Could it be Ali? After all, she's done a ton of very questionable things in her past. Now that she's coming back she very well could face justice for things like blinding Jenna and being an overall mean girl. And what about Ezra? We know that he survives the gunshot wound, but what if A's final act of torture was revealing Ezra and Aria's relationship to the world? Just in case anyone forgot, dating your student is super illegal.

Tune in to ABC Family on June 10 at 8 PM for the Season 5 premiere of Pretty Little Liars.