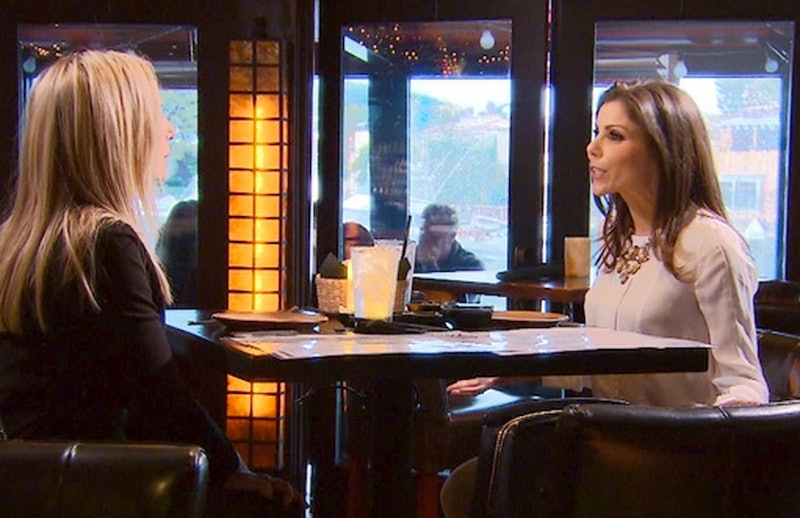 The bubbling Real Housewives of Orange County Chairgate stew boiled over during Monday night's episode. It was a very polite boiling over, of course. The stew didn't scream or or cry or throw a piece of furniture. The spill was negligible, barely dirtying the tablecloth. Heather Dubrow and Shannon Beador dabbed at the spots with water. Whether the spots came up, or if the cloth is stained is to be determined. We won't know until the water dries.

When and how and why does the metaphorical boiling over of the metaphorical stew occur? Heather calls Shannon invites her out for a drink with the intent to work out their ish. The mere thought of the meeting exhausts Shannon. She agrees to go, of course, but you can see her mentally thumbing through her schedule, working out when she can squeeze in extra acupuncture appointments to undo whatever stress the meeting is going to cause her.

My god, if Shannon and Heather aren't an incompatible pair. Yeah, they're smart, nice, and rich as all get out, but their personalities clash like whoa. Heather can be so direct and aggressive, which totally harshes Shannon’s new agey chill vibe. And no, their disparate personalities don't balance each other out. Instead, they lock horns. And by "horns," I mean "onion rings and a bowl of lemons."

Here are the notes I took during Heather and Shannon's convo:

So, did the conversation solve everything? Are they the new BFFs of the cast? I mean... no. The convo is basically a "Though I don't buy what you're selling, we have to work together. Let's at least be civil" type of compromise. I stared directly into the television and into their eyes, and their eyes told me that they don't trust each other. That they'll keep each other at arm's length. Will they fight again? Perhaps, perhaps not. (My guess: Both will say things that get under the other's skin, but they'll never blow up at each other.)

I really, REALLY hope this isn't the last we hear of Chairgate. I've spent too much time thinking about Chairgate (my current stance: they should've asked the restaurant to sit them at a fresh table so that they could give choosing their seats another shot), I can't let go now. Chairgate. Chairgaaaaate. Chairgate forever.