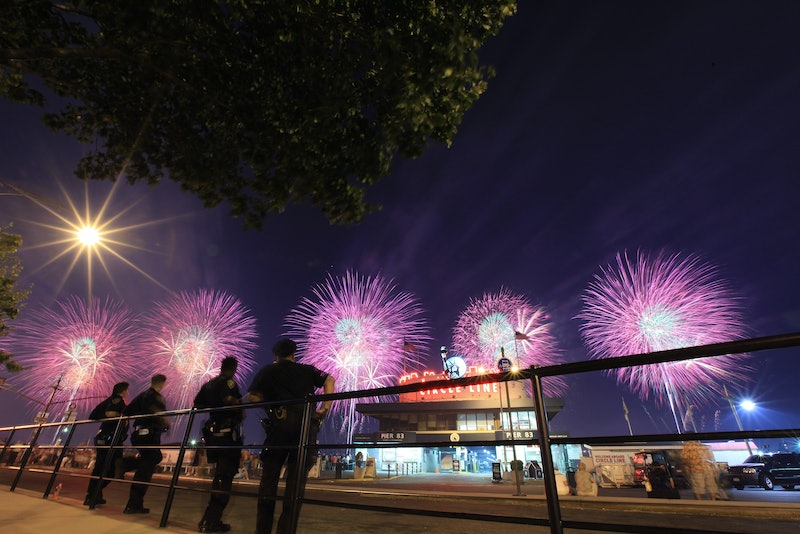 Every year in America, we celebrate the Fourth of July; the sacred day on which we mark our independence by overeating and blowing stuff up. Yes, nothing quite says "Go, USA" like a gluttonous barbecue and fireworks display. While many Americans trek out to professional shows, others choose to bring the joy of pyrotechnics into the comfort of their own backyards — to often-disastrous results.

Thankfully, in an age of smartphones and YouTube, these hilarious fails have been immortalized for all of us to enjoy. A quick search yields plenty of material, much of it staged or rehearsed like a failed attempt to strike it rich on America's Funniest Home Videos. But if you look hard enough, you'll find some good, honest human error at which to gawk.

We scoured the darkest corners of YouTube to find the firework failures that go beyond profanity-laden frat bro compilations and found people who have found some truly innovative ways to screw up (or at least put a hiccup in) their Fourth of July festivities. From videos with pets and babies (yes, both of those things are involved), to the nerdtastic, to good old-fashioned hubris, we've got it all.

So learn from the mistakes of your fellow firework lovers or just celebrate the season with some Schadenfreude because...'Merica?

when you Give a Dog a Firework...

Maybe the funniest thing about this particular type of fail is that it's a common enough occurrence to warrant a highlight reel from America's Funniest Home Videos. It shouldn't be particularly shocking that it's not a fab idea to mix pets and explosives, but apparently not everyone has gotten the memo. The real gem here though is that the owners are probably more freaked out than the dogs.

If you're a fan of the baby who is afraid of (and brought to intense laughter by) sneezes, then you will love this baby watching his first ever firework display. It really puts the idea of recreational explosives into perspective. Also, he's adorable.

Too Close for Comfort

It's the I'm-watching-a-horror-movie-esque commentary of the woman narrating (and filming?) the video makes this a winner. She sees the stupid coming before it happens, but doesn't actually warn anyone — instead opting to make snarky commentary to the people around her.

The woman lighting the fireworks (who remains anonymous thanks to the epically awful lighting of fireworks videos everywhere) confidently sings a little "this is how we do it," before lighting her firework, screeching in fear of (apparently) the small amount of fire necessary to light the wick, and then runs away in abject terror as her firework does exactly what normal fireworks do.

All of the Lights

In this ironic twist on the Fourth of July firework fail, the firework display goes off without a hitch. It's another light in the sky that has people upset. At a display in 2012, angry patrons got borderline irate about the flood lights that were obnoxiously pulling focus from the firework show they were watching. The best part is the call and response: "Turn 'em off!" "They're on a timer!" "...Turn 'em off!" Isn't our country great?

The pains that were taken to create a fireworks show in Minecraft, the posting of the video in spite of said failure, and, especially, the narration via Notepad. Your heart will ache at the nerdiness of it all.

When searching for funny and epic firework fails, YouTube offers up a slew of compilation videos. Most are a combination of horrifying and hilarious, but props to this user for setting their compilation to the uplifting tune of Katy Perry's "Firework."

More like this
35 Ideas For 4th Of July Nails That Go Beyond Red, White, & Blue
By Audrey Noble
13 Summer Solstice Quotes To Celebrate The Longest Day Of The Year
By Sadie Trombetta
The Summer Solstice Spiritual Meaning, Explained
By Jessica Booth and Brittany Beringer
18 Father's Day Poems That'll Make You & Your Dad Tear Up
By Michelle Regalado and Siena Gagliano
Get Even More From Bustle — Sign Up For The Newsletter