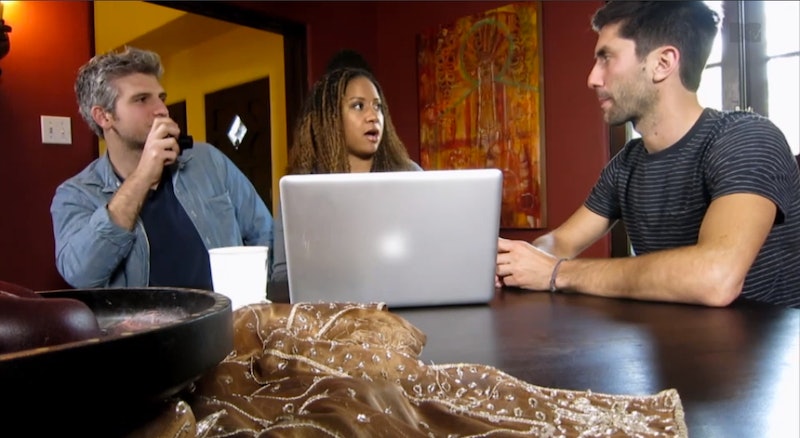 At this point, it feels like we've seen everything on Catfish: The TV Show , from a regular joe pretending to be a hotshot record producer to women pretending to be men to some who even turn out to be exactly who they say they are online (How refreshing!). But Catfish will reach a whole new level of crazy and get its first-ever celebrity catfishee when Rent star and actress Tracie Thoms appears on Wednesday night's episode.

You may be thinking to yourself, "How did a beautiful, talented Hollywood star with everything at her disposal end up getting so duped by someone online that she had to enlist the help of Nev and Max?" It does seem odd that the actress who belted her heart out as Joanne in the film adaptation of Rent and kicked some ass in Quentin Tarantino's Death Proof has somehow ended up on an MTV reality show because of her online companionship. But the truth behind it all is even weirder.

Unlike the majority of the men and women who appear on Catfish, Thoms' online relationship wasn't romantic but instead involved a super fan. According to the preview released by MTV (below), Thoms met a fan named Sammie about two years ago on Twitter. While Thoms was filming her indie movie Raze, Sammie helped promote the project and frequently retweeted Thoms. The actress thought Sammie was smart and funny. She enjoyed the short movies Sammie would make, star in, and post online, so much so that Thoms was even going to hire her.

But then things got awkward, as they always do on Catfish. Sammie introduced Thoms to her friend Reese, who one day tweeted that she hoped she could meet Thoms before it was too late. When Thoms pressed her about the cryptic tweet, Reese revealed she had cancer. Soon, Thoms got more emotionally invested in Reese's personal life than Sammie's until Sammie revealed that Reese had passed away.

Thoms thought Reese's condition had worsened a little too quickly, but she still found the news upsetting. Another red flag went off when Sammie asked how Thoms was doing, even though it was her good friend who had just died. And then when Reese miraculously came back from the dead to favorite her own "R.I.P." tweet from Sammie, Thoms thought it was safe to say that Reese was probably never a real person, and that seems like a pretty safe bet to us, too.

The more Thoms looked into this fishy situation, the more Sammie's story seemed to unspool. She found out Sammie and Reese had also been talking to Thoms' producer friend Lotti Phariss Knowles. Sammie sent Thoms an alleged funeral video and a funeral banner, which Thoms confirmed with the chapel was not affiliated with someone named Reese. And if Thoms needed any more convincing that Reese wasn't real, she got it when she discovered that another person she had been talking to on Twitter with the handle @MarissaCampaign, who previously notified her about Sammie's own near-death experience, had been turned into Reese's Twitter profile. You got all that?

Thoms gave a last ditch-effort by asking Sammie for Reese's obituary, and Sammie said she had to get Thoms' address to mail it to her (sneaky, sneaky). Thoms asked Sammie to just TwitPic it to her, and she never heard from Sammie again. And of course, Sammie started deleting tweets when she realized Thoms knew what was up.

So we've got a different situation here from other Catfish episodes. We already know Thoms has been catfished, but she's still got a lot of questions for Sammie, as do we all. But Thoms' reasons for tracking down Sammie, if that is her real name, are also pretty noble. She says she wants to make sure Sammie hasn't been doing this to other people and that she's doing all right in general. Thoms also wants to tell Sammie that she doesn't have to create these crazy schemes to get attention.

But doesn't this show, in a way, enable people like Sammie by shining a spotlight on their catfishing ways? We'll see if the conclusion of Wednesday night's episode can soften our cynical hearts.