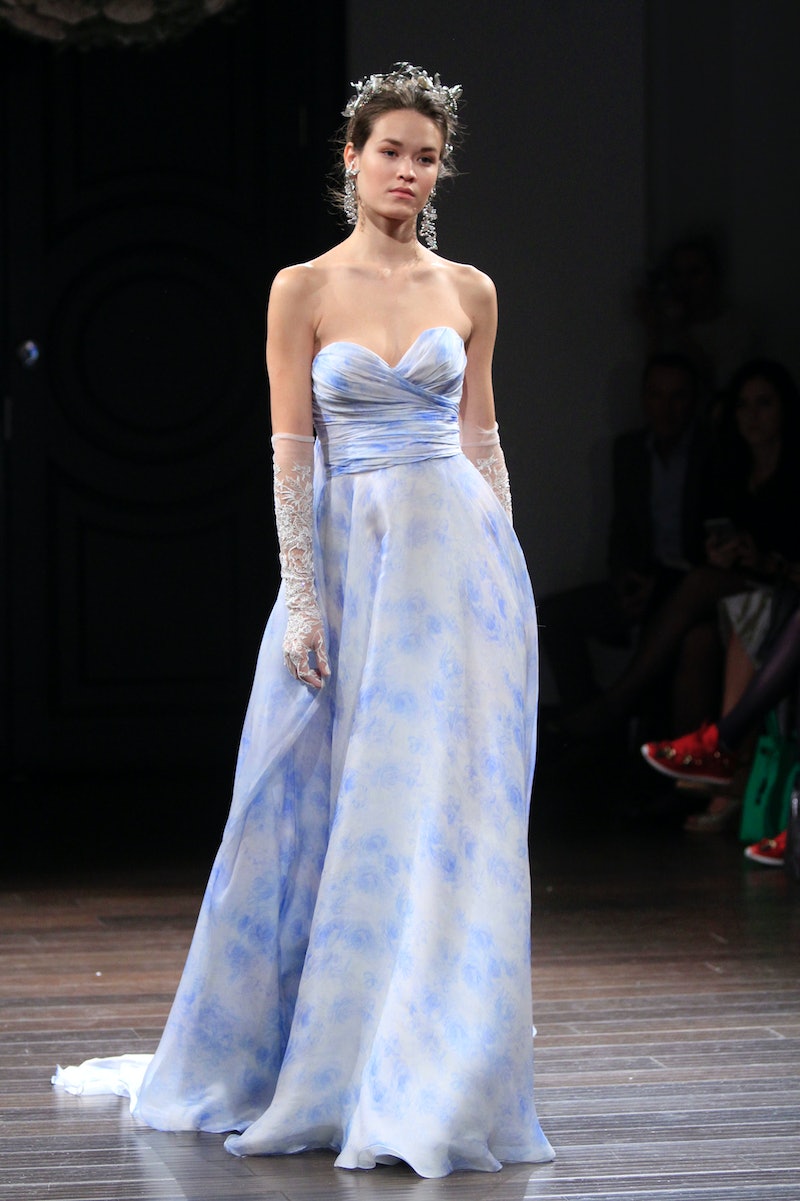 We’ve been looking at a lot of figures lately concerning how much a wedding costs the average American couple and how much it costs to attend a wedding — but you know what we haven’t looked at yet? The state of wedding traditions. And hey, guess what? Thanks to a new Harris Poll, we’ve now got some perspective on what’s going on there — and apparently, a number of classic wedding traditions are on their way out the door. Personally, I think that’s a good thing; a lot of the standard wedding practices are antiquated and don’t necessarily reflect how the world is now, so it may be time to do away with them. Here’s what the numbers say:

One of the biggest fading trends is perhaps the most obvious: Brides, especially Millennial brides, don’t feel like they absolutely have to wear a white dress on their wedding day anymore. 54 percent of those polled still agree with the white dress expectation, but 46 disagree with it — and you know, a 50-50 split ain’t so bad.

The tradition of the bride’s family paying for the wedding, too, is fading out; 53 percent say that it’s to be expected, but 47 percent don’t. I expect that 47 percent will continue to increase over time, too, especially with more and more couples paying for their own wedding, rather than relying on their parents to finance it.

3. On Waiting Until Marriage

Lastly, Americans are also equally split on “waiting for the wedding night” (if you know what I mean): 51 percent agree with the idea, while 49 percent don’t. This figure is actually the one that surprises me the most; of all the people I know who have gotten married lately, I don’t think a single one of them waited to have sex before they tied the knot. I realize using “People I Know” as my sample is not the most accurate measure I could go with, but I’m pretty confident I’m not the only one in this boat. See? Even Leslie Knope agrees:

One tradition, however, that seems to be sticking around is the idea of the bride’s father “giving her away”: A whopping 84 percent agree with the tradition, with 44 percent saying they do so strongly. I’ll be honest — I kind of hope that by “the bride’s father giving her away,” we really mean “someone closely connected with the bride giving her away.” Sure, there’s something symbolically nice about the head of the bride’s family letting her go to start a family of her own, but “head of the family” doesn’t have to mean “dad.” It might be another parent, or a grandparent, or a mentor, or any number of other figures who have loomed large in the bride’s life. Maybe that’s just me, though.

Speaking of “giving the bride away,” there are also some pretty distinct differences between generations when it comes to certain traditions. 90 percent of Baby Boomers, for example, think the bride’s father “giving her away” should carry on, while only 75 percent of Millennials do. Baby Boomers and Matures are also more likely to support to the traditional billing practices, specifically with regards to the rehearsal dinner, with 71 percent of Baby Boomers and 73 percent of Matures saying the groom’s family should foot the bill for that particular party.

Of course, there are still plenty of guides out there for traditions like who pays for what (thanks, Martha Stewart) if you want to stick with the old ways; but at the same time, there are loads of other traditions that modern couples can probably skip. Not into the idea of the big, poofy, white dress? Check out these stunning wedding gown alternatives from The Cut — it’ll be fantastically memorable, and maybe you’ll even be able to wear it again for another occasion!